Residents in a Margate block of flats say they are being plagued by drug takers using the communal areas and leaving their paraphernalia lying around on the floor and window sills because the main access door to the block has been broken for 6 weeks.

Families in the Sandhurst Place block say users are cutting up their drugs inside the hall and stairwells as well as leaving discarded items because there is nothing to prevent them gaining access.

The broken main door at the property, managed by Orbit, was first reported on September 13 but despite promises to get it fixed this still has not happened.

Sandra Payne is a 54-year-old mum living in the block with her 10-year-old son. She has disabilities and her son lives with autism and is home-schooled. She says she is exhausted after regularly staying up all night, waiting for trespassers to go so she can clear away the paraphernalia they leave behind.

She said: “They are using their stuff here, cutting it up on window sills, not thinking that a young child could touch it or that they could discard a cigarette end and set fire to us all just because Orbit won’t fix the main security door to the block. 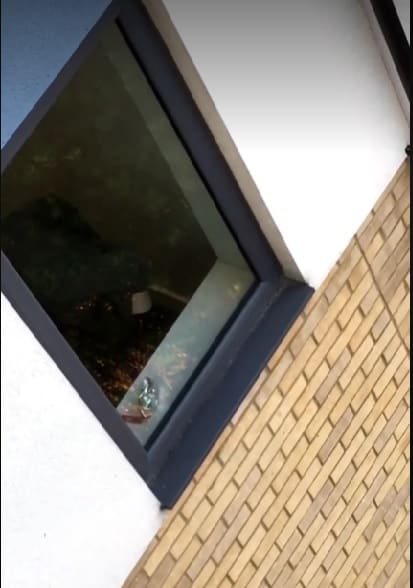 “I’ve got pictures and videos taken from my bedroom window early hours in the morning of a heroin addict in the block two nights in a row, one even shows him putting something up his bum. I stayed up from 4 am, which was when I noticed him there and what he was actually doing, until 9am until he left.

“I kept creeping out my flat and checking down the stairs and each time I saw him I went back indoors. I did this so I could clean up after him as I would never forgive myself if a child did touch it.

“I’ve been doing this for weeks now trying to keep the families and mine safe at night . I’m a 54 year old disabled single mum to a 10 year old autistic boy that I home school, I take morphine 4 times a day for pain, I take other pills for depression that I need to take at night but for the last month or so I’ve felt that I have to do this because Orbit can’t get the main door fixed and secure.

“One time when I rang about the door and they said it’s a security breach but still haven’t sorted it to keep us safe, I’ve written so many emails to them and even to MP Roger Gale and all he can do is forward my emails on to different people

“There’s a huge problem here and nothing gets done. I’ve reported antisocial behaviour, made diaries and nothing. I bet Orbit wouldn’t like sharing their stairs with junkies. Parents with young children walk past them on the stairs breathing in their smoke. I’m getting so tired now having to do this.

When the police finally came to see me about the first man they advised me not to approach him, he’s a danger to females and he’s a person known to police for sleeping in electric cupboards.”

On October 22 someone got into the block and vandalised the lift control cupboard despite Orbit telling The Isle of Thanet News on October 13 that the main doors would be repaired in seven days.

Sandra said: “Someone got in the block, the door was not fixed. They vandalised the lift control cupboard. One neighbour said the noise from the cupboard sounded like it was going to blow up. Orbit fixed the lift cupboard but still did not secure the main door. “When they do these repairs they put our service charges.”

Kent Police confirmed officers were called to the incident. A spokesperson said: “Kent Police is investigating a report of damage caused to an electrical cupboard connected to a lift in a communal area of flats in Sandhurst Place, Margate.

“The damage is reported to have taken place at around 9pm on Friday 22 October.” 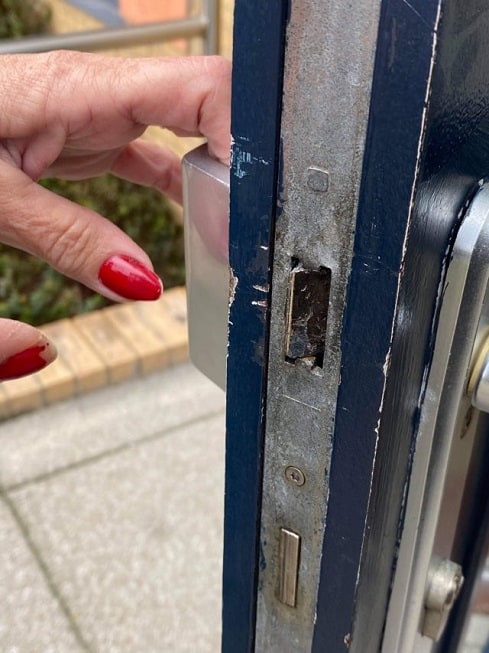 On October 13 an Orbit spokesperson said: ““Contractors are booked to undertake repairs to the front communal door and fit a new locking mechanism within 7 days. We apologise for any inconvenience caused and will continue to liaise with the customers to ensure they are satisfied with the outcome.”

However, the repair has not yet been done and Sandra says Orbit is trying to get a new security system put in that cannot be broken but meanwhile access to the block is still open and the beading holding the glass on the inside of the doors is now  also broken.

She added: “They should seal off the door until it can be fixed and we can all use the back door that actually works.”

“We apologise for any inconvenience caused and will continue to liaise with the customers to ensure they are satisfied with the outcome.”