A miniature poodle who had been living by rail tracks after going missing more than a month ago has been reunited with his owner.

Teddy was with a dog walker in  Broadstairs Memorial Rec on September 13 when he ran off. He was spotted the following day running on rail tracks at Broadstairs station but then the trail went cold until this month.

After vegetation was cut down by Margate railway station on October 10/11 Teddy was spotted again.

Owner Louise Harrop received a call last week from Thanet’s Mobile Operations Manager to say: “a black poodle like dog that looks like it’s be living in the wild for a while was running about on the tracks near Margate Station.”

Yesterday, Teddy was again sighted where the track runs by All Saints Industrial Estate. 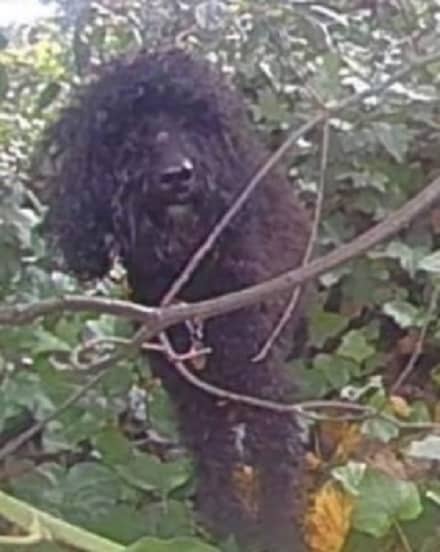 Laura Sullivan, from the Missing Dogs and Strays Thanet group which has been carrying out searches across the five weeks that Teddy had been missing, said: “After Teddy was seen at Margate we were trying to work out where to trap him. Then after yesterday’s sighting at All Saints Industrial Estate we spent the night trying to trap him but he got spooked by a cyclist as he was about to go in trap.

“Teddy was in what we call flight mode, the red mist is down and fear takes over, they will not recognise their name, their owner, everyone becomes a predator and survival is all that matters.

“Despite searches by a number of people there was no sign of Teddy and his owner as advised left scented items down for him.

“Today’s capture was by Louise doing everything I asked of her. For nearly an hour Louise sat on the floor on one side of the fence while Teddy sat up near the Tracks just looking at her from afar.

“Slowly but surely he started to come down nearer so Louise still sitting side on in a non threatening manner to him slowly flicked smelly food not at him but near to him to lure Teddy to her.

“He was still track side but had lost enough weight to squeeze through the bars at the back of the estate.”

Louise and Teddy were happily reunited. Teddy will have a check over at the vets this afternoon.

See video of Louise finally getting Teddy off the railway land and into her arms on the Missing Dogs and Strays Thanet page on facebook.