Hundreds of tomatoes growing on the coastline at Pegwell Bay are the result of combined sewer outfalls into the sea.

The bumper crop was spotted by designer Deva Corriveau during a walk near the former hoverport site.

He said: “I was walking down at the beach by the old hovercraft pad in Pegwell, and noticed literally hundreds of tomatoes growing right on the waterfront, which seemed very strange.

“At first, I thought it was quite an exciting, interesting oddity – or that maybe they weren’t tomatoes at all. But, then I decided to do a bit of research online, unfortunately, and rather disgustingly, I found out why there’s a bumper crop of tomatoes growing on the beach.

“Tomato seeds apparently are not broken down in the human digestive tract, so when Southern Water releases the sewerage overflows into the sea and onto the beach, these seeds are scattered onto the beaches where they happily take root.”

Nik, who runs the Wildlife Conservation in Thanet page on facebook, said: “In recent years I have found lots of the evidence of raw sewage going into our rivers and seas, normally things like floss harps, plasters, applicators and ear buds. But poop tomatoes is a new one on me.

“The human body tends not to digest tomatoes and they are a large part of our diet. So as the untreated sewage hits our waters the seeds have been washing up along the coastline all around Thanet but it is only in Pegwell Bay where there are fertile conditions and they are able to grow. 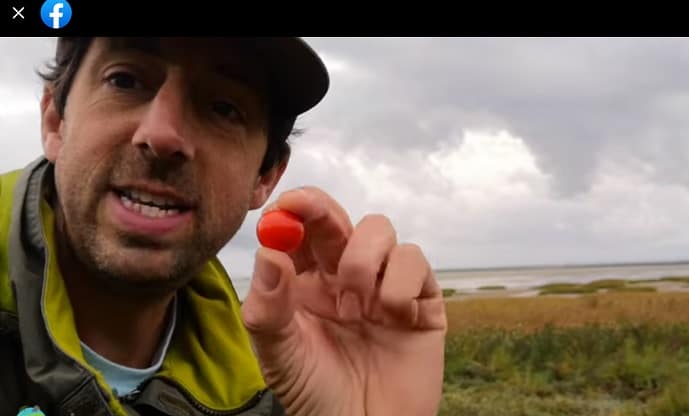 “I am very in touch with Pegwell Bay and this is the first time I have noticed hundreds of tomato plants growing. They are great for snacking on whilst doing my litter picks!

“When talking about the sewage spillages I like to point out to people that it’s not just our seas being polluted it is our rivers too and it’s not just raw sewage it is heavily polluted road runoff too.”