Wanderers pack was unchanged from that which played in the win at won at Deal and Betts with Kris Finneran again called up for back row duties. Nick Herbert was absent on school duties so Marius Thompson started at ten.

There was a first start for Harrison Leach at scrum-half with Tom Walton switching to full-back. David Lemon was on the bench with Francis (Fran) Gillespie, another graduate from Ian Lodge’s Colts, who was to make his debut. The weather forecasters were depressingly correct as heavy rain and high winds made it a difficult afternoon for the players and officials.

After kicking off up the slope, there was an early opportunity for the visitors as Thanet were penalised for not rolling away, but the attempt went wide from 25 metres.

Louis Marshall was back on Thanet’s right-wing after injury and set his side on the attack with a charge down. Wanderers were looking dangerous with most of the play in the visitors’ half. Ollie Green-Taylor was again playing out of position and was bundled into touch by a strong tackle as he spied an opening on Thanet’s left-wing. 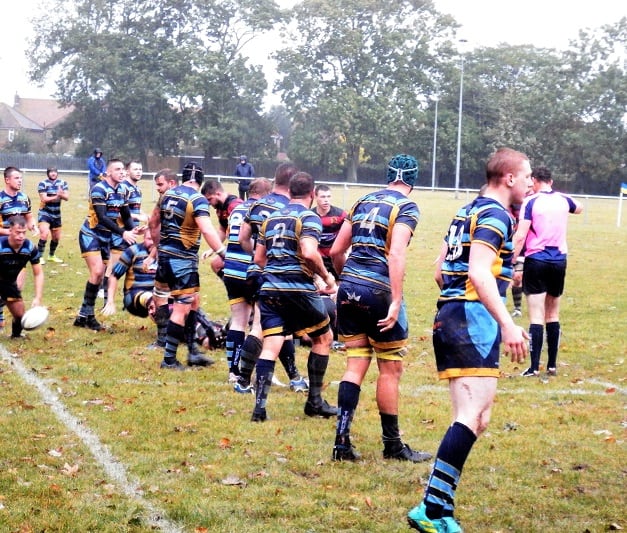 Thompson ghosted through a small chink in Gravesend’s defence but his pass was spilt. As the half-hour mark approached there was finally something for the small home crowd to cheer. A patient build-up took play right and sucked Gravesend’s defence in before Thompson’s cross-kick opened play up for a chase from Wanderers which was won by James Hamilton who opened his Thanet try account.

James, who hails from New Zealand, has been a regular in the Wanderers back row this season where he has quickly made his mark. Thompson’s conversion attempt from the left touchline was just wide. Gravesend roared back and despite a big tackle from Cam Pond, in the centre, they were soon threatening the home-line and after some nifty footballing skills, their number 14, Matt Brady, touched down. A good conversion meant the visitors led 5-7 at half-time.

Wanderers restarted with the wind behind them and stand-in skipper Charlie Knight, halted a building attack with a crunching tackle. Five minutes into the half, from a Gravesend scrum, their scrum-half’s attempted clearance was charged down by Thompson who then carefully gathered the ball before racing in just left of the posts.

His conversion gave Wanderers the lead 12-7. On ten minutes of the half, Hamilton limped off to be replaced by David Lemon. Wanderers pushed for more as a good drive forced a Gravesend knock-on, a great chase from Marshall forced an error and Andy Letts, at eight, burst through the Gravesend defence.

The pressure brought a penalty opportunity for Thanet from 25 metres and Thompson made no mistake to lead 15-7. Gravesend forwards kept play tight and six minutes later their power brought a try that was not converted.

Wanderers were pinned on their line and desperate defence brought a yellow card for Tom Walton and another head on head injury between James Green and David Lemon meant a long delay before the visitors again powered over, aided by the wily skills and long experience of their replacement front-row forward Jamie Forsyth.

A well-judged conversion gave them the lead, 15-19. In the remaining minutes, Danny Clement was on for James Green. Wanderers could not add any points and had to be satisfied with a losing bonus point whilst Gravesend remain unbeaten in second place. 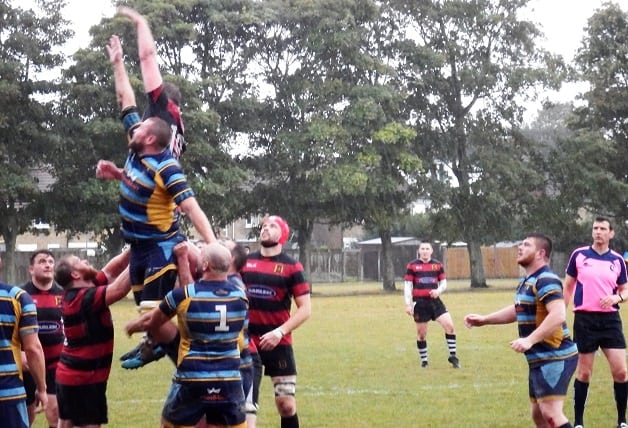 The conditions were not conducive to expansive rugby with the ball spilt too often from promising situations, but this was a combative performance against strong opposition from Wanderers.

Wanderers front five forwards were unchanged, Adam Gaddes and Jack Startin in the second row are building an effective partnership and the front-row has been the bedrock of Wanderers pack’s competitive start to the season.

Prop forwards James Green and Alex Tuddenham and hooker Neil Wakefield have shown good early season form: Neil’s throwing to the line-out was immaculate and his play in adverse conditions earned him the coaches’ award as Thanet’s man of the match.

The first XV have a rest next weekend with no match, 2s are at home to Ashford 2s in the first round of the Kent Shield on Saturday. Kick Off 3PM.