Protesters from the Palestine Action group have blocked entrances to the Instro Precision site at Discovery Park, Sandwich, this morning (October 4).

Instro Precision, which is owned by Israeli military company Elbit Systems, says it is a supplier and system integrator of support equipment for military and commercial electro-optical sensors in the world. 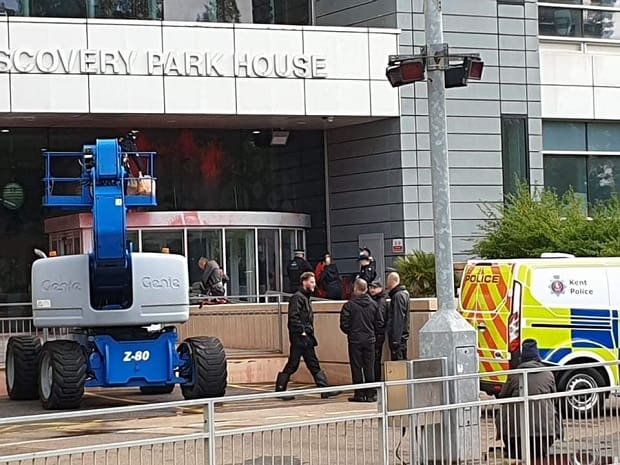 The company started operations as a precision contract manufacturer in the 1960s. Today, products are sold in more than 50 countries with main customers being blue chip prime contractors in defence and homeland security sectors.

BREAKING: All entrances to Israel’s “state-of-the-art” arms factory in Kent are blocked. Their landlords offices @DiscoveryPark_ are occupied. And Elbit’s factory, Instro Precision, is shut down! #ShutElbitDown pic.twitter.com/umarGQfLRG

In 2019 the firm moved to Discovery Park from Broadstairs, where it had been the target of numerous protests. There have also been several protests at its site in Discovery Park.

Palestine Action says: “Instro, which is owned and controlled by Elbit Systems, manufactures a range of military equipment for the purposes of warfare, targeting and popular repression. These include weapon sights for infantry and heavy artillery, such as the XACT th64 sights – which have been sold in quantities of thousands to the Israeli military, likely outfitting their sniper regiments which man the Gaza border.

“The owners of the industrial estate, Discovery Park, are also being targeted in this action, with their offices shut down by activists. This is due to their extensive partnership with Elbit Systems, having worked collaboratively to design and erect Instro Precision’s state-of-the-art arms factory.”

However, the action has not prevented Instro staff from attending work. 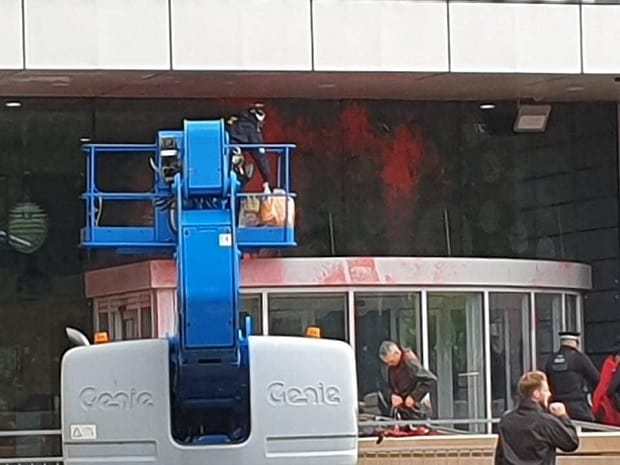 The action has been slammed by South Thanet MP Craig Mackinlay who commented on social media that it was the: “Usual protestors disrupting a respected @DiscoveryPark_ business.

The MP claimed the action was “anti-Semitic.”

Kent Police are in attendance. A spokesperson said: “Kent Police is currently attending a report of a protest in Discovery Park, Artillery Way in Sandwich.

“Officers were called to the scene at around 6.20am where it was reported two vehicles were blocking access to the site and criminal damage had been caused to a building.”