The eagerly awaited second book about the history of Cliftonville goes on sale from mid October.

Written by local author Nick Evans, it’s the post Second World War era which comes under the spotlight in the second volume of The New Town On The Cliffs – The Story of Cliftonville.

The 128 page A5 landscape book contains nearly 200 nostalgic photographs, many of them postcards, with an emphasis on the shops of Northdown Road and the guest houses and smaller hotels in the area. There are also separate chapters for Butlin’s hotels and the Walpole Bay Hotel.

Cliftonville was originally built in the 1860s as an upmarket antidote to its noisy neighbour, Margate. As trends changed, Cliftonville adapted to become a busy centre of bucket and spade holidays during the 1950s, 1960s and early 1970s – it’s this era which offers the richest selection for nostalgia buffs.

Nick said: “I hope people will really enjoy this second volume as there will be a great deal they recognise and remember.  Several people, having bought the first book, have been clamouring to know when this second one would be launched.

“I’ve been very fortunate to have been generously loaned so many good photos – it was often a hard job deciding which ones to include.”

It’s been a busy year for Nick as this is the fourth local history book about Thanet he has published inside 12 months. The others have focused on Westgate, Broadstairs and the earlier era of Cliftonville.

It’s entirely fitting that long-established Cliftonville family owned business, Lovely’s Gallery in Northdown Road, is the main stockist of Nicks latest book as it celebrates its 130th anniversary throughout 2021.

The New Town On The Cliffs – The Story of Cliftonville (volume two) costs £12. Copies can be pre-ordered via Lovely’s website (where post and packing is extra) https://www.lovelysartsupplies.co.uk/the-new-town-on-the-cliffs-the-story-of-cliftonville-by-nick-evans.html or by visiting the shop at 248 Northdown Road. 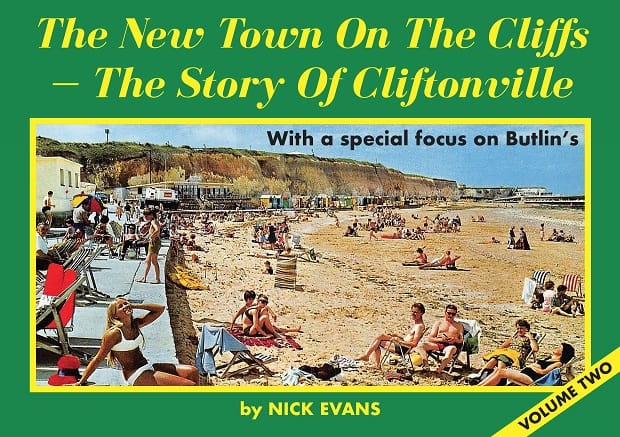