A Ramsgate care worker who spent more than nine months in hospital after contracting Covid-19 has finally been discharged to his family.

Alan Finch was admitted to the Queen Elizabeth The Queen Mother Hospital in Margate on 19 January and spent two months in a coma.

He developed sepsis, pneumonia, and multi-organ failure, and twice his partner Claire Wickham was told he might not survive. But, after intensive rehabilitation at the Kent and Canterbury Hospital, today (September 23) he was able to walk out, applauded by some of the staff who helped save his life.

Alan, 49, said: “I have a really mixed bag of feelings about leaving. The staff have been like a family to me and I’m sad to be leaving them. But it’s fantastic to think I will be home with (partner) Claire and in my own bed.

“I can’t thank everyone at both hospitals enough for everything they have done for me. They saved my life; without them I wouldn’t be here today.” 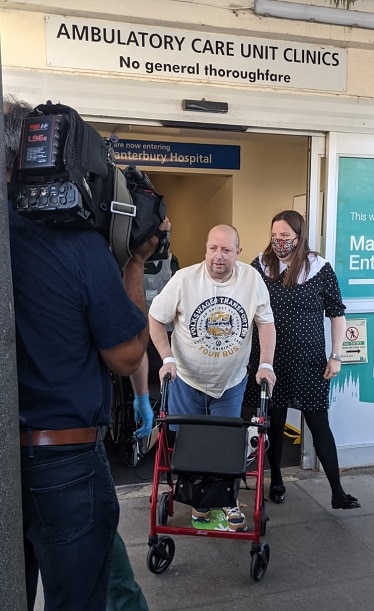 Alan and Claire both developed the virus but while Claire recovered, Alan’s condition deteriorated and he collapsed at home. He was taken to hospital by ambulance – and would not return home for 248 days.

When he came round from his coma, he could not move his arms or legs, or speak, and had no strength at all. He was only able to communicate by nodding his head.

Alan said: “The physios and the whole team have been absolutely fantastic. You don’t realise the progress you are making until you look back to see how far you have come.

“I was determined that it wouldn’t beat me and it didn’t. I feel very lucky that I am here and able to go home.

“I was due to get the vaccination the day I was admitted, and it will be one of the first things I do when I get home. I think everyone should have the vaccine; I wouldn’t want anyone else to go through what I have.”

Claire, who lives with Alan in Ramsgate, wore one of his t-shirts every day while he was in hospital so she could feel close to him.

She said: “It has been the hardest time of my life. Twice I was told this day wasn’t coming and I had to say goodbye. If it wasn’t for my mum and dad I wouldn’t have got through the past nine months.

“It was so emotional to see him being clapped out, and for the staff who had looked after him to see how far he has come with his recovery. Today is definitely a special day.”

Julie Jones, ward manager on Harvey Ward, where Alan completed his rehabilitation, came to the hospital on her day off to wave him off.

She said: “It is days like this that make being a nurse the best job in the world.

“Alan’s fantastic grit and determination paid off and thanks to his hard work he is able to walk out of hospital, after being so poorly when he first came to us.

“All the carers, the nurses, doctors, porters and domestics have got to know Alan and it was so emotional to see him able to go home.

“It really reminds us why we do the job that we do.”