The gardens around Ramsgate’s Peace Memorial have won a prestigious Silver Gilt award in the 2021 South & South East in Bloom Awards.

The memorial is at the old entrance to the Grade II-Listed Ramsgate General Hospital in West Cliff Road, which was converted into flats over a decade and a half ago. Blocks of flats and two-bedroom houses were built in the grounds, and these now make up a gated community.

Planting around the site includes a mix of trees and shrubs, some flowering, which are now well established. Flag stone paths, areas devoted to gravel, and a few key grass areas complete the gardens.

The neighbourhood employs Joe Forster as a part-time gardener – but this role cannot cope with the demands of the growing landscaped areas. General ground maintenance and weed control is carried out by neighbourhood residents. 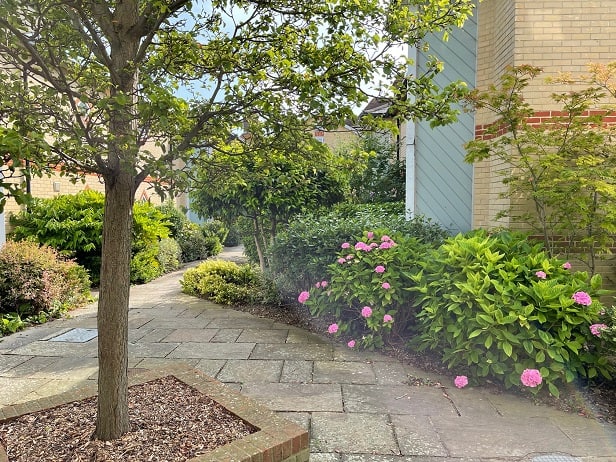 Recently the community decided to upgrade the neglected Peace Memorial. This ongoing work, by the residents, will result in the replanting of two L-shaped deep planters placed on the roof of the Memorial and other improvements to the site. The Peace Memorial also features in a forthcoming gazetteer of peace sites around the UK.

South & South East in Bloom are part of Britain In Bloom. Their Silver Gilt is the second highest award possible, and other local awards include a Silver for Royal Harbour, Thriving awards for Broadstairs Town Team’s gardens, and a Silver for Langmead Guest House, Ramsgate.