An appeal has been made for help to find a miniature poodle who bolted while being walked in a Broadstairs park on Monday (September 13).

Owner Louise Harrop took Teddy to Broadstairs Memorial Rec for an afternoon walk but he bolted.

He was spotted running back into the park some three hours later, at around 4pm, but despite a search by Louise and volunteers from the Missing Dogs and Strays Thanet group was not found.

His blanket has been left in bushes at the park in the hopes of coaxing him back to the spot. 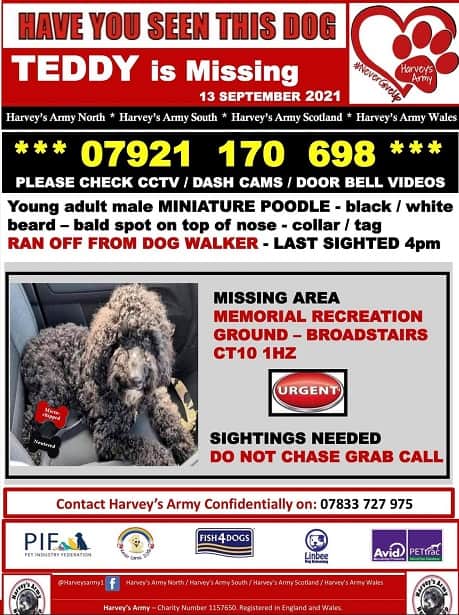 Laura Sullivan, from the Missing Dogs group, said: “The next day he was seen at 7am again running around the roads by the park but he was chased and ended up on the platform on Broadstairs Railway Station where he ran off the end, straight onto the tracks and was hiding in bushes.

“We think he was being called so he then disappeared and was sighted at Dane Valley by a train driver around 9am and then back at Broadstairs station on the tracks around 10am.

“A woman at the station called him and he was lost again. We did evening searchers around the area. Today (September 16) someone heard barking at Dumpton Park Station and a lady was overhead talking on the train about sighting a small black dog the size of a cat on the tracks. This lady hasn’t come forward and we ask that she does as she could have been talking about Teddy or actually seen him.

“Louise left scent items and food at Dumpton Park and we put a wildlife camera up but sadly the food was untouched and the camera only picked up the trains. There have been no sightings of Teddy since the official confirmed one on the Broadstairs station tracks. “Workers from the rail service have walked the track with equipment but have been unable to find Teddy, and are waiting on another sighting. Train drivers are also aware and are slowing in the areas.”

People who spot Teddy are asked not to call or attempt to grab him but to report the sighting by calling 07921 170 698 or message the Missing Dogs and Strays Thanet page on facebook.