Thanet District Council has commissioned Fourth Street Place Consultants to carry out a feasibility study on the redevelopment of Westbrook Loggia at Westbrook Bay.

The Loggia, which sits along Westbrook Royal Esplanade, was originally constructed as a bathing pavilion in the early 1900s. The building, owned by Thanet District Council, is currently empty except for a section occupied by Thanet Lifeguard Club and Your Leisure.

Earlier this year, the council put out a tender for a feasibility study to consider development options that would be practical, sustainable and commercially viable 365 days of the year. The building has also been identified as a key site to deliver improved experiences and facilities all year round in the council’s Destination Management Framework.

According to the Architect’s Journal, the project is to transform the Loggia into a food, retail or mixed-use venue with small scale self-catering accommodation and public toilets.

When the site was listed for asset disposal by Thanet council a stipulation of sale on the open market was for the purchaser to commit to building the new public toilets.

Several expressions of interest were previously lodged with Thanet council for taking over the building. 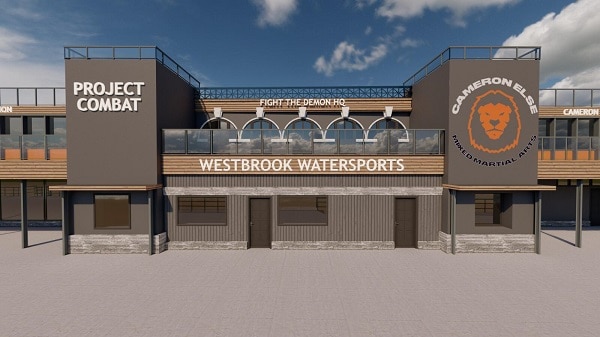 A previous Cabinet agenda for the asset disposal of the Loggia said: “The building is in very poor condition requiring an estimated £700,000 to be spent over a term of five years to maintain and prevent further deterioration of the building.”

As part of the new study, Thanet council wants residents, businesses and beach users to give their views. An online survey  launched today and will be open until midnight on Tuesday 5 October.

Council leader Ash Ashbee said: “The Westbrook Loggia is located in a residential area and on a beautiful beach that is popular with both residents and visitors. It enjoys a prime beachfront location, with fantastic access to both Margate and Westgate-on-Sea.

“For this site to be commercially viable, an all-year-round offer will be needed and the council would like to see something that will make the best use of the Loggia’s footprint and positively enhance the area. The provision of public toilets and the management needs and services for the bay will be considered within future planning for the site.

“We would greatly appreciate people taking the time to complete this short survey and telling us what they would like to use at the site. We are keen to hear from as wide a range of people as possible, whether residents, visitors or people with business interests. Your views matter.”

A feasibility study investigates the viability and practicality of a potential project or development. The study is being carried out by Fourth Street Place Consultants and will include a full building appraisal as well as considering best practice models; the kinds of future mixed uses that could be provided in the Loggia; potential business / funding models; market testing of the concept and commercial viability.

The final report is expected by the end of the year and will be taken to Cabinet for consideration.