Perched on the eastern most tip of the north Kent coast, Broadstairs has long been the epitome of the middle class bucket and spade holiday resort.  Its genteel style was a world away from the boisterous crowds who swarmed to larger neighbours Margate and Ramsgate.

For several summers in the late 1960s and early 1970s my family hired one of the many concrete chalets on the verandas of Viking Bay which meant we could enjoy the fine sands, the crashing waves, Punch & Judy, the nearby ice cream parlours and the occasional welsh rarebit at the Omar Café (which was next door to the Albion Hotel).  In my later teenage years, local hostelries would hold further attractions for me.

Holidays, assisted by the arrival of the Victorian railway, raised the profile of the place considerably.  Broadstairs quickly turned from a sleepy fishing town to a seaside resort for the well-heeled, particularly once author Charles Dickens became a regular visitor in the mid 19th century and wrote some of his most famous work here.

Broadstairs, whose coastline forms the second most easterly point of England, had long been a must-visit place as it was a major anchorage for mariners seeking a blessing at the shrine of Our Lady of Bradstowe, Star of the Sea, venerated by mariners since medieval times. (The shrine was set close to where the Chapel Bookshop and bar now stands in Albion Street). Once blessed, ships’ crews could feel more confident about putting to sea again for a safe voyage.

During the 17th and 18th centuries it was smuggling that supported the lives of many in the area.  Tobacco, brandy, lace and tea were favourite goods brought ashore at night, most notably through bays at Kingsgate and Joss Bay.  In those times they were isolated places and well away from prying eyes, despite the best efforts of the often outnumbered and outgunned Revenue men.

Broadstairs was the favourite destination of Charles Pooter in George and Weedon Grossmith’s Victorian comic novel The Diary of A Nobody. “I don’t think we can do better than Good Old Broadstairs”, he exclaims when asked where he would like to spend his summer holidays.

The late 19th century of Mr Pooter was an era of bathing machines, long dresses, large hats and rolled parasols. It was a picture which would last until the First World War began in the summer of 1914 as indicated by an Edwardian town guide issued by the former Broadstairs & St Peter’s Urban District Council.

Under the heading of ‘amusements’ it  reads: ‘Owing to the wise control exercised by the local authorities, Broadstairs is free from the objectionable forms of seashore entertainment which are met with in many coast towns.  Nevertheless there is a sufficiency of al fresco amusements of the favourite type…..’

The sands, we are told, were never dull.  Indeed the ‘seashore on a sunny morning, thronged with happy children paddling in perfect security at the edge of the waves, presents a kaleidoscopic picture of singular animation and attractiveness.’

Savouring more of the Edwardian scene we learn: ‘A first-class band plays beneath a shelter at the extremity of the picturesque pier.  In the afternoon the Victoria Gardens are the rendezvous of music lovers who delight to lounge in the comfortable deck-chairs provided by the enterprise of the Band Committee.’ 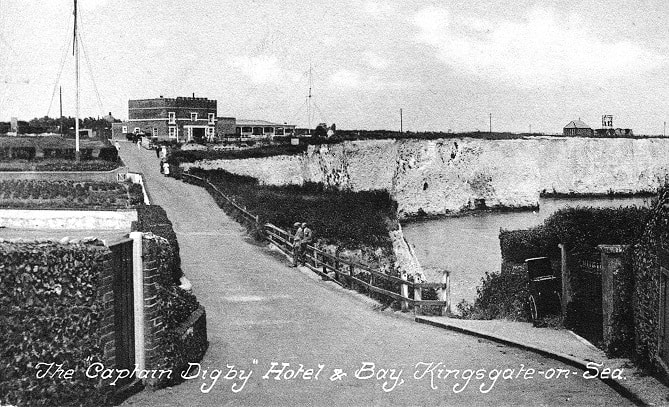 During the 1930s, with war clouds looming, dark tales of German espionage emerged – a spy gave himself away in Broadstairs thanks to his limited English while another passed himself off as a wealthy financier when living at North Foreland. In reality he was paving the way to become Gauleiter of Kent should a German invasion prove successful.

Across town, a young man was growing up fast, winning a scholarship to Oxford University which would set him on the path to political greatness. 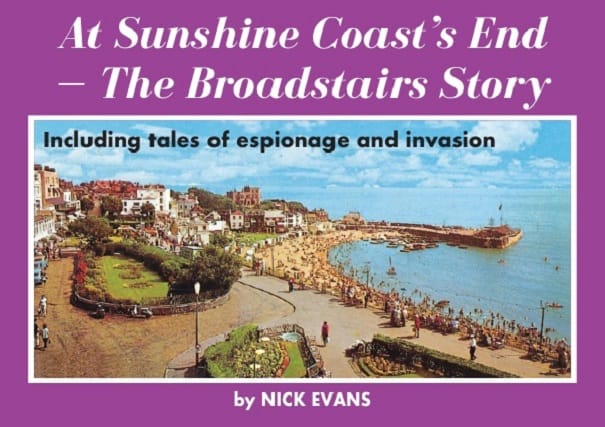 All of these nostalgic tales, and much more, are recounted in detail in a new book, to be published in late September, entitled At Sunshine Coast’s End – The Broadstairs Story, by local author Nick Evans.

Copies of the 144 page book, costing £13, can be reserved now by calling into the card and gift shop, No3 in York Street, Broadstairs, or online via www.shorelinepartners.co.uk and clicking on to its books section.