For Kira Haines sitting down and having a family meal has been an impossibility over the last nine years.

The 24-year-old from Margate suffers from two rare conditions which result in a main artery and a vein being  compressed, causing constant stomach and chest pain and gastro problems. This is intensified by eating and exercise.

Sainsbury’s Westwood worker Kira has lost two stone in a year, plummeting to just seven stone, and her diet is restricted to fish, rice and potatoes. Even that can only be eaten when Kira is taking Tramadol painkillers.

Kira, who graduated from university at Rochester with a first in photography, says her condition has been dismissed by the local health service. Doctors initially diagnosed Crohn’s disease but then changed that to stress-related bowel condition IBS.

However, after her desperate family started researching the symptoms and paid for private tests and appointments with specialists two rare conditions were diagnosed.

A Doppler Ultrasound showed Median Arcuate Ligament Syndrome (MALS)- a major artery of the aorta that delivers blood to the stomach, liver, and other organs and nerves in the area is being compressed; and Nutcracker syndrome (NCS)- meaning the left kidney vein is being compressed.

The family paid to see a specialist in Germany and now, exasperated by the inability to get help in the UK, they are fundraising to send Kira to America for surgery. 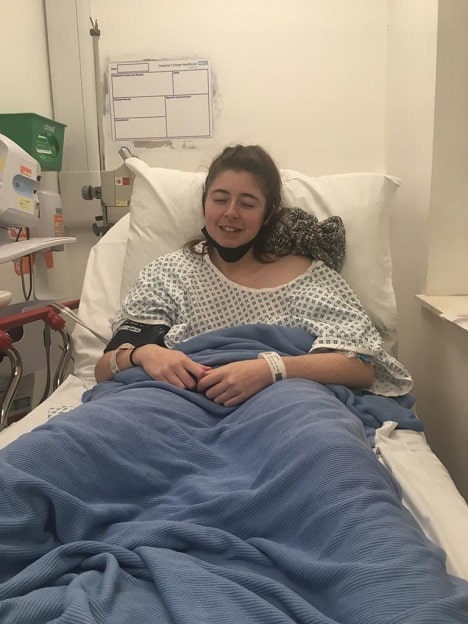 Kira said: “I just kept hoping they would come up with an answer and that I’d eventually get better but it just goes on and on.

“Travelling to uni was really difficult and I had to plan out my day, have my medicines, not eat anything. I can’t go out with my friends to eat or drink. I’d love to eat a burger or just spaghetti Bolognese at home with my family.

“I am constantly tired all the time and will take naps during the day.

“At the doctors I feel like they do not believe what I am saying, sort of ‘you look fine, it can’t be that bad,’ even though you know something is wrong. It’s hard because you feel like you just have to get on with it but can’t.”

The health problems began when Kira was just 15. She became very ill and an investigative laparoscopy was undertaken. Kira was rushed into hospital two days later with sepsis and bacterial infection Clostridium difficile.

She was unable to eat and had to be tube-fed. Her sister Fern, who has set up the fundraiser, says it was touch and go whether Kira would pull through. She was on multiple antibiotics, steroids, painkillers and morphine for a month in hospital until she was discharged with a liquid diet to take home.

Since that time Kira has suffered the debilitating stomach pains and undergone numerous invasive and painful tests but there has been no firm diagnosis and no effective treatment.

The family breakthrough and the trip to Germany have given some answers and the procedure available in America has given hope – but it comes at the large cost of £40,000.

American specialist Dr Hsu has undertaken some 500 surgeries for MALS with a 90% success rate. Kira sent her scans to him and had a video consultation where he confirmed the compressions diagnosis.

A referral letter was sent out for Kira to have a Celiac Plexus Block where, if she was pain free after the procedure, it would confirm surgery would help.

Kira gave this letter to her doctors but the family had to find a private pain management doctor and pay out nearly £2,000 for the block, which involves using two long needles to put steroids into the compressed artery, numbing the nerves.

Kira said: “I was able to eat for a week without any pain and felt like I was back to myself. When it wore off I was a bit deflated but it showed how I should feel after the surgery.”

The family say the need for surgery is urgent because if the compression is left untreated for too long it can lead to other, irreversible conditions due to the lack of blood flow.

Kira’s mum, an Age UK worker, and nan have used savings to pay some £6,000 for consultations, the trip to Germany and the block treatment but now need to find £40,000 for the procedure which has been scheduled for November.

Fern, 26, said: “This has just gone on so long and my sister is struggling mentally and physically. We feel bad eating when Kira is there, she can’t have family meals, she is missing out on her social life and holidays and can never be spontaneous. It is so upsetting to see, especially when no-one is listening to her so we have had to go to private consultants.

“This procedure could be life-changing for her.”

As well as the MALS procedure Kira will need the Nutcracker Syndrome treated and she is researching kidney auto transplant or donating her kidney, which would also help change someone else’s life who has a life-threatening condition.

The effects of the condition have also caused pelvic congestion where blood in the renal vein cannot get through properly so finds a different pathway leading to  pooling in her pelvis and May Thurner Syndrome, where the left iliac vein in the pelvis is narrowed.

Kira may also need a procedure to put a metal bar in her chest to push out that compression. This is because scans from the private consultant show the compression in Kira’s chest is only 4 cm away from her spine, causing pressure on her heart and lungs.

In the fundraiser, Fern says: “At school Kira use to be very active and sporty yet now she gets out of breath from climbing a flight of stairs. She has also developed long lungs from the pressure as she cannot exhale enough air on every breath. Yet again, this means that we will have to self-fund to have this done.

“We feel Kira has been let down by the health system.”

By compressing the artery right before it branches, MAL cuts off blood supply to the stomach and liver. This is a reason why patients complain of pain after meals.

MALS occurs most often in thin, younger women. It is a very rare condition.

The first sign of MALS is pain in the upper abdomen after eating. The pain causes you to avoid eating (called food aversion), which leads to weight loss.Other associated symptoms may include nausea, diarrhea, vomiting and delayed gastric emptying (a delay in food moving from the stomach into the small intestine).

What Is Nutcracker Syndrome?

Nutcracker syndrome is a renal vein entrapment syndrome, in which the arteries near the kidney compress the left renal (kidney) vein.

In most cases, compression of the left renal vein is between the abdominal aorta — the main artery in the abdomen — and the superior mesenteric artery, which brings blood to the pancreas and intestines. Nutcracker syndrome gets its name because this compression is like a nutcracker crushing a nut.

Normally, the left renal vein brings blood out of the left kidney and into the inferior vena cava, the body’s largest vein.

Compression of the left renal vein can cause blood to flow backward into other nearby veins and make them swell.

It is a rare disorder that can affect adults or children, though the prevalence and specific causes are unknown.

It’s more common in women in their 30s and 40s who are tall and slim. Symptoms may appear after rapid weight loss.

Most people with nutcracker syndrome have abdominal pain but this condition can be present — especially in children — without any symptoms.

Median arcuate ligament syndrome (MALS) can be treated with surgery to relieve pressure put on the aorta (the body’s largest artery) by a ligament.

Patients are typically given keyhole surgery to move the median arcuate ligament and divide the nerves in the area, with the aim of loosening the tissues around the artery and improving blood flow to the stomach and liver.

People with severe renal nutcracker syndrome could have surgery to move the left renal vein from a position where it is putting pressure on the kidney.

This can be done by cutting the blood vessel, putting it somewhere more suitable and reattaching it. The vein may also be bypassed completely in a bid to alleviate the condition.