On August 24, 1940, Ramsgate suffered the first war-time ‘blitz’ on a British town when, without warning, 500 bombs were dropped in 5 minutes.

German aircraft had meant the bombs to be dropped on Manston and Ramsgate airfields but they were thwarted by British fighter aircraft and ground defences. The leader of the raid was then shot down by an armed trawler just outside Ramsgate Harbour, after which the remaining aircraft flew over the town dropping their bombs. 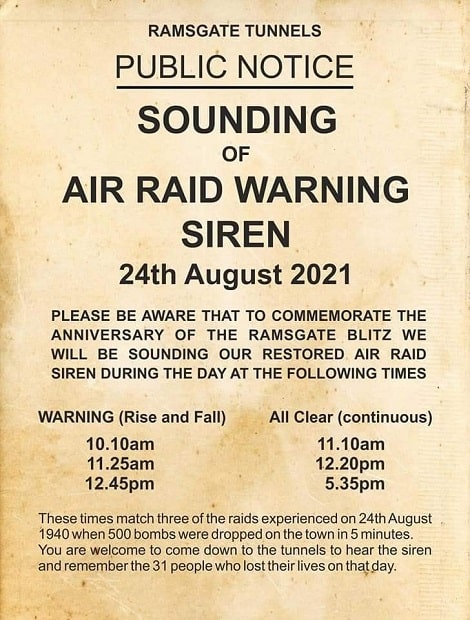 Fortunately the sirens had sounded as the enemy aircraft were seen heading for Manston and several thousand of the town’s population made their way into the Ramsgate deep level shelters. Considering the devastation on the surface this action proved nothing short of a miracle with only 31 people being killed. Still 31 too many, but without the shelters it could have been so many more.

To commemorate the 81st anniversary of this event today (August 24) Ramsgate Tunnels is sounding the air raid siren at key times of the day.

Details with thanks to Derek Smith