Broadstairs writer Jane Wenham-Jones has died just three days after the publication of her seventh novel. She was 59.

Jane would use Thanet locations and was amused when readers would tell her they recognised themselves – wrongly – as being the inspiration for characters in her books.

She described herself as a Jacqueline-of-all-trades. As well as her popular romantic novels, she wrote self-help guides such as ‘Wannabe a Writer’, thousands of magazine and newspaper columns, and was a popular host at literary festivals, talking to some of the country’s best-known authors.

One of her proudest achievements was being a co-founder of Broadstairs Lit.

She appeared on several tv shows, including ‘Ready, Steady Cook’, was an in-demand after-dinner speaker, gave cruise ship  lectures and ran writing workshops which encouraged many aspiring authors to go on to successful careers.

In 2020, Jane was ‘Columnist of the Year’ in the Kent Press & Broadcast Awards and had been named in the finals of this year’s event taking place next month.

In the 1990s, Jane urged the editor of the Isle of Thanet Gazette to let her have a weekly column in the newspaper. Space was tight and he demurred. When she persisted, he told her: ‘There might be an opportunity soon, God willing’.

Her reply ‘And when exactly do you think God might be willing?’ had the desired effect and she went on to write eagerly-anticipated columns for the next 20 years.

Jane was a flamboyant character, her trademark colour-streaked hair often matching the colours on the cover of her latest novel.
Her bubbly personality ensured she rarely went unnoticed and she relished her many appearances on radio and television. ‘I’m a media tart,’ she would admit.

And yet behind the extravagant persona was a woman of great sensitivity, with an empathy to listen to and give generous advice to those in need.

Jane Wenham-Jones was born on 12 January, 1962 in North Cray, Kent. Her sister Judith said: ‘I was six at the time and remember hearing her sneeze eight times after she was born.’

The family moved to Broadstairs the same year. Jane was educated at St Mildred’s Primary, Upton and Dane Court Grammar. She ran her own business, Harvest Associates, sourcing promotional material for events such as golfing days and conferences and became a TEFL teacher, a qualification also held by her son Tom. 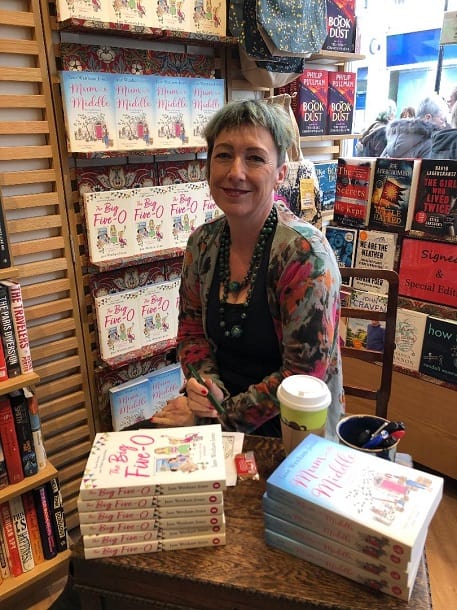 But writing turned out to be her forte. Novels including ‘Perfect Alibis’, ‘Prime Time’ and ‘One Glass is Never Enough’ found a ready audience.
Her non-fiction humorous non-fiction ‘100 Ways to Fight the Flab’ led to her proud claim that she coined the phrase ‘writer’s bottom’.
Jane died on Sunday, August 22, 2021.

A fundraising page in her memory can be found at https://fundraise.cancerresearchuk.org/page/jane-wenham-jones

Jane was a columnist at The Isle of Thanet News and we are extremely sad at the loss of our colourful, vibrant friend.

We will remember her not only as a great writer and brilliant people person but as a fun, vivacious and generous lady who gave many people pleasure, laughter and kindness.

Tribute with thanks to Mike Pearce