The Rewilding Margate group has ‘laid claim’ to a strip of land at the side of  Turner Contemporary.

The area, on Fort Hill had been a haven of wildflowers and pollinators until it was mowed to a ‘barren’ patch last month.

Rewilding Margate say that as the patch does not appear to belong to Thanet and Kent councils or Turner Contemporary, they will take ‘adverse possession’ of it.

Aubrey McKenzie, spokesperson for Rewilding Margate, said: ‘All three parties who would be obvious candidates for owning and maintaining that land state they are not responsible for it, bringing into question – who does own the land and who cut down the wildflower meadow there?

“Given that no one will come forward it is reasonable to assume that the land is not owned by anyone, and so we have begun formal research to progress with adverse possession of the land for the good of the people of Margate and to do our little bit to ensure the future of the planet and the human race.

“It is imperative that we start taking care of the land right away and to protect it as it is so obviously under threat from mystery mowers at any moment. We intend to let the wild flowers flourish with the minimum of intervention to ensure that the area remains a site of beauty for the people of Margate and a haven for birds and pollinators.

“The group lay claim to the ground as their property unless anyone shows superior legal entitlement. Anyone who damages the flora growing on this land will be charged in court with criminal damage.”

The recent destruction of the wildflower area  was also a blow for The Margate Nature Trail group which was using it as a starting point for its route. A walled garden of wildflowers still remains beside the ‘barren’ patch and this is now being used by the trail group instead.

A sign has been placed beside the land explaining the ‘takeover’.

Writer and illustrator Dosh Archer, from the Margate Nature Trail, has created another character to represent the wildlife meadow – Herbie the Bee! He accompanies the sign, buzzing in happiness now that his flowers are protected. He will be used to educate children about the importance of bees and their habitat on the Margate Nature Trail. 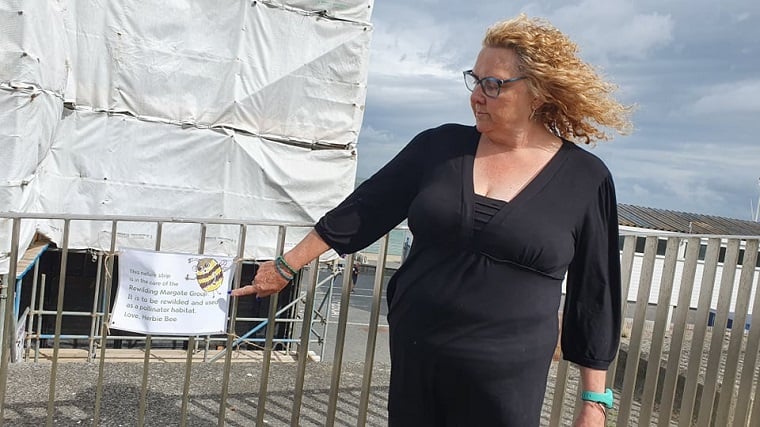 Fi O’Connor from Rewilding Margate, said: “Bees are endangered for a number of reasons, one of those being loss of habitat, and it is exciting that we will be going forward in a proactive way to ensure proper management of our environment and the habitat of the pollinators.”