Westgate resident Wilfred Jenkins had a fright when he was travelling on the bus from Herne Bay to Westgate yesterday (August 16) after the window he was sitting near shattered.

Animal-lover Wilfred was travelling home after his regular volunteering spot at the Cosy Cat Café in Herne Bay but a serious accident on the Thanet Way meant the Regent Coaches driver had to find an alternative to his usual no 36 route.

The bus diverted to Hoath but then met a tractor on the narrow stretch. Regent Coaches boss Sam Regent said: “A knock on effect of the accident on the Thanet way meant that the road on our route to Margate was shut. The driver was going through Hoath and, it is harvest time, met a tractor going the other way.

“The tractor backed up and they tried to squeeze past each other and were virtually there when, I think, the baler tapped the emergency window.

“If it had been normal glass it would have been fine but because it was the emergency window, for people to get out id there is an accident, it broke into a million bits.”

Westgate resident Wilfred, who lives with autism and deafness, is well-known in Thanet due to his social media pages and his regular online ‘sign a day’ videos teaching others to understand sign language.

He said it was ‘scary’ but people on the bus – and a facetime with his mum – meant the situation and the fact that a replacement bus was coming was explained to him.

The 25-year-old said: “There was no glass on me but it did frighten me very badly and I ran to another seat.

“But luckily I had my phone with me so I facetimed with my mum and someone was with me explaining to her what was happening and my mum explained to me.”

Sam said all his drivers make sure to look after their passengers, adding that many are regulars who the staff get to know.

The replacement bus took a different route while the road closure was still in force. 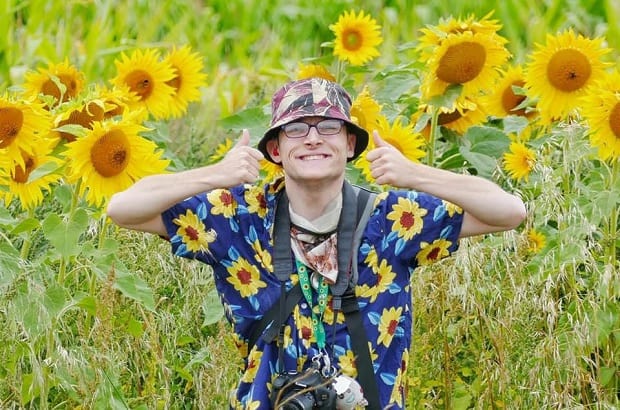 Wilfred is non the worse for wear and was out today with Margate photographer Frank Leppard to take sunflower field photos.