Millwall versus West Ham, United against Liverpool, the North-London derby, The Old Firm derby, Benfica vs Sporting, ‘derby di Milano’, Boca Juniors vs River Plate and El Classico, are some of the fiercest and most famous derbies in the world of club football, but all pale into insignificance to the annual Thanet Derby.

Billed by some as ‘the battle of the gates’, others more simply as the blues vs reds, it is described on the clubs’ websites as a friendly. The Thanet trophy offers both sides Thanetian bragging rights as well as actual silverware, yes actual silverware – the tiny Thanet Trophy.

The wet and cloudy Saturday afternoon served up classic conditions for any derby, looking up you could have been mistaken by thinking it wasn’t the final day of July but October with aggressive looking grey dark clouds circling above Ramsgate’s Southwood Stadium. Rain Macs covered one in every two red or blue jerseys.

As a man who blames his season ticket purchase on getting caught up in England Euro mania, that and a few too many pints, this was my first Thanet trophy. In fact it was my first away game following the gate, the blue gate.

For both sets of fans this game, this derby, this cup final, represented a chance to put a plaster over the penalty pain of that fateful Sunday night, for the losing set of fans it will no doubt act as confirmation that summer 2021 has been one of sporting agony. The atmosphere was actually friendly and despite the rivalry all were united in the same quest to get a quick pint before kick-off. 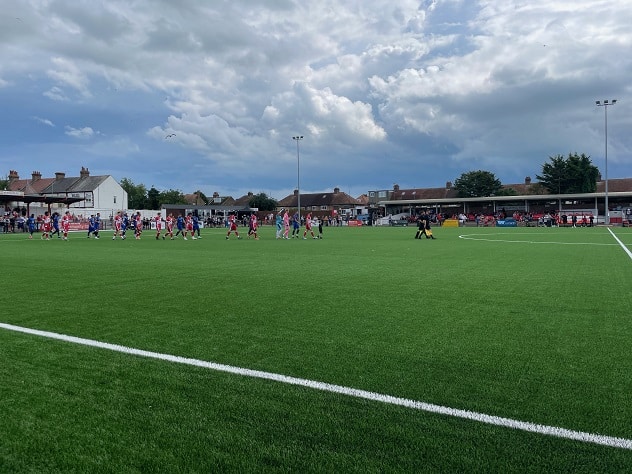 Prior to kick off I overheard a Ramsgate fan say that he hopes Margate’s keeper is Italian and that he lets in a few penalties as it would the ‘ultimate hangover cure for the Euros’. I laughed as our keeper, Kallmeier, is about Italian as the ingredients of an Iceland Hawaiian pizza.

Ramsgate came into the game high on belief after beating Gillingham’s under 23 side 3-0 while Margate failed to score against lower league Whitstable in what I was told was one of the worst games of all time but none of that mattered as the old cliche goes ‘form goes out the window’ in these derbies. As Sweet Caroline belted out of the speakers at Southwood the 1,800 odd fans were all in agreement that the Neil Diamond banger was still a little too raw to fully enjoy the teams’ walk out onto the 3g pitch.

The game got off to a lively start and Margate dominated the opening exchanges, a change in system from Saunders meant that the man mountain with the touch of angel and the shirt of a child Montel was played as a number 10, whereas usually he sits in front of the back four. Ramsgate couldn’t handle him, and when he burst through and Maiq Morris took him down, the battle of gates erupted, a scrap looked likely for a second, this was the ‘spicy’ start that all classic derbies begin with. The ref, presumably from mutual-Broadstairs, was quick on the scene with calming shouts of ‘settle, settle, settle’.

For a few minutes after the game did exactly that and settled and the only battle of note was the legendary lady of the drum and her shrill siren like screams of ‘come on margateeeeeee’ and the Ramsgate fans at the opposite end battering of their own sponsorship boards, followed by ‘come on you Rams’. Then Margate came to life, they exchanged a bit of tidy play before Sessegnon whipped in a superb cross into the box for Greenhalgh aka the lower league Giroud to meet with his head. 1-0.

A bit of a Ramsgate response followed and a few flashes from their winger number 7 who showed a bit of pace and guile. In true lower league fashion the Ramsgate fans behind Kallmeier were giving him some stick and looked to be in his head, as a few catches were missed. Margate looked lively going forward and Montel, marvellous Montel or ‘Monty’ as he’s becoming known refused to give up chasing down the Ramsgate defenders and won the ball back in tenacious fashion and played in Bessey who’s flashing feet and quick lay off found Ben Greenhalgh’s/ Giroud’s left foot. 2-0.

Just before the half an hour mark, an exchange in midfield led to a Ramsgate defender making a block with his hand and a free kick was awarded, Ben Greenhalgh was the most confident man in the whole of Thanet at this point and put the ball down with the kind of conviction usually seen by a drunk man ordering a kebab. ‘I’ll have that’. Southwood held its breath, as Greenhalgh trotted up to the free kick as gracefully as a thoroughbred in the dressage, it dawned on me. Ben Greenhalgh might be about to make history, not just as a potential first half hat-trick scorer in the most ferocious of all the derbies but as the only player to have ever complete an unlikely double header. Greenhalgh, of ‘Football’s Next Star’ 2010 fame, an odd footballing show that he won and bizarrely led to him getting a contract with Inter Milan, Jose’s treble winning Inter Milan team. This means Ben had the chance to be the only player to have ever won the Champions League and the Thanet trophy.

Greenhalgh connects, and curls in a beauty. 3-0. First half hat trick. A helicopter flies above, with fans quipping it’s ‘Sky Sports News’ or Jose flying in wanting desperately to re-sign Greenhalgh for Roma, Margate have looked a cut above at this point but a Ramsgate response seems inevitably.

While in liaison with a couple of fellow Margate fans about how good the new set up looked, Ramsgate were awarded a free kick. Maiq Morris stepped up and went below the wall and into the bottom corner. 3-1.

Trip to the friendly club house for pints and chips, despite donning one of the loud Margate kits the only discerning stares came from the seagull that guards the forecourt, a singular seagull, significant in size and clearly on a diet of John Smiths and chips watches your every move. 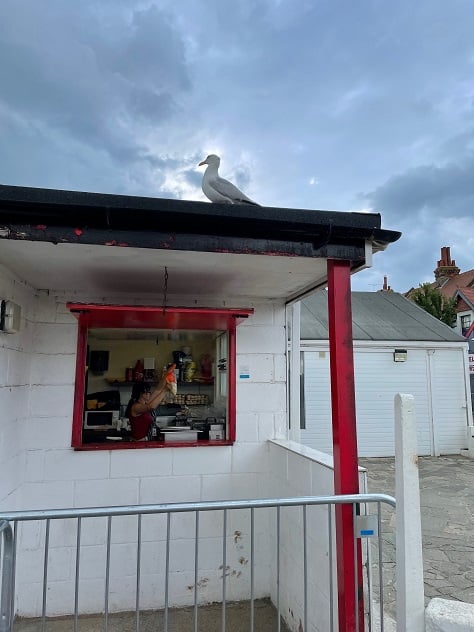 Second half got underway, Ramsgate looked to bring the game to Margate which led to a few lovely transitions from defence to attack from the blues and showed signs of things to come. As Bessey who had looked like Mo Salah on the ball, cut back to Thompson aka Wilfred Zaha to finish neatly. 4-1. As soon as the three goal lead had been restored the heavens opened, fans flocked for cover. The rain came lashing down, everyone hurried for the sheltered stands, all except one man who refused to be rushed by the rain and walked nonchalantly balancing his three polystyrene trays filled with fried food in what even Northerners would describe as ‘bastard rain’.

The rain made the spectacle that little more intense as a few slide tackles went in, the black beads from the 3g pitch now more apparent on every challenge, every hurried footstep, every kick of the ball. A cross from the Ramsgate winger led to a bit of a howler from the keeper as he appeared to fail to catch it and slip which led to the ball falling kindly for Ramsgate’s Jadama to tap in. 4-2. A glorious sarcastic ‘wheyyyyyyy’ came from the fans behind the goal.

There was time for one more moment for the blues and it was the moment. Monty’s moment. Lower League Giroud aka Greenhalgh who had looked particularly cultured in possession  picked up the ball in the centre circle pinged a delicious chip (tastier than the ones they were serving in the club house you might say) in the direction of Montel who hit it on the half volley. A sight that made the blue half of the gate erupt with glee. 5-2. With all fans packed in under the shelters, Margate’s fans joy, was in very close quarters to Ramsgate’s fans woe. One lad who was celebrating a bit too enthusiastically and shouting ‘oh monty, oh montyyyyyy’ was met with frowns and jeers of ‘alright calm down hope he’s got a change of pants’.

Full time whistle blew and by the time Margate got their hands on the cup the skies had opened again and hail, yes July hail crashed to the floor, there was no laps of honour, just a quick lift from captain Ben Swift and a cheer and a clap then the crowd emptied quicker than we’ve all ditched the face masks.