From hearing the crash of a cymbal to reading the vibrations of a snare, learning percussion has enhanced the lives of an eclectic group of budding isle drummers.

Graham Smith, of Thanet Drum Tuition in Broadstairs, is credited with sharing his passion and skills for the sticks and has kept his students drumming throughout the pandemic.

During lockdown the 30-year-old persevered with online lessons and was surprised at their success.

“It’s really difficult teaching drums online but I had a core of around six students and we got them through their exams which I didn’t think was possible,” he said.

The father-of-one also teaches at Salmestone Primary in Margate and carried out online assemblies but it’s his vibrant cohort of private students who will be playing live this month at a special showcase.

He said: “My youngest student is five and the oldest is a guy called Kevin who is 66 –  I have taught him for four years together with his daughter. It was something that he always wanted to do and it’s especially for him and Rachel (daughter) to spend time together. It’s really nice.”

Another young teenager who was deaf prior to receiving a hearing implant learned drumming with Graham through reading vibrations. “We didn’t know how she would get on after the implant but she is doing absolutely fantastically,” he said.

They will all have the opportunity to play live with a band – Graham’s musician friends –  with around 25 performances playing music from across the board.

“There will certainly be a blend of sound,  we have songs from Red Hot Chilli Peppers, System of a Down, John Newman and Rudimental – also a number of tracks taken from Tik Tok,“ Graham said.

Graham started playing music when he was 13 and after a year of lessons joined a local percussion group called ‘Percussion School’. He learnt how to perform and teach African Drumming, Samba and Garage or ‘Stomp’ Percussion.  In 2008 he helped write and perform a piece at the Royal Albert Hall. ​ 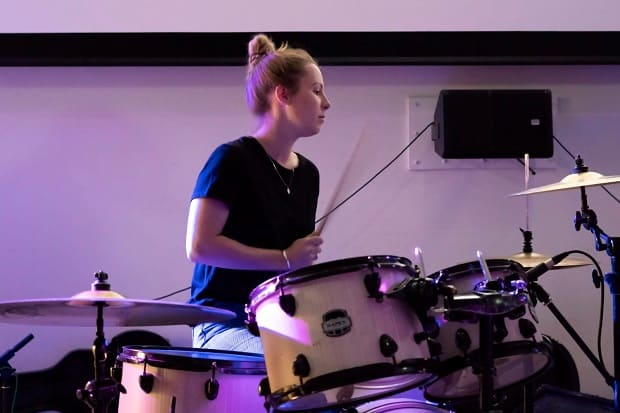 Student Susan Horn (pictured), 37, says Graham provides lessons to everyone – including those on low incomes –  and shares his passion for music with anyone who wants to learn.

She said: “I came to realise the multiple benefits to drumming: stress relief, improved brain function, social opportunities and a chance to be social and have fun. Graham’s endless motivation creates a truly inspirational environment for any student.”