A dispute has broken out between residents in a Cliffsend road and a developer brought in to clear a plot of land that backs onto their gardens.

Maybank Homes Ltd is clearing land at 20 Clive Road which has planning approval for the building of five houses.

But the work has caused outrage amongst those whose properties back onto the site who say the clearance has strayed the boundary and ‘taken chunks’ of their gardens – leaving a sheer drop into the development site.

One family also say the work crew demolished land belonging to them by using it as an access point to get to the site.

The dispute has resulted in numerous complaints to police with both sides claiming incidents of abuse, damage and confrontations as well as further complaints to Thanet and Kent councils.

Resident Saffron Clayton says she was given three hours to remove a chicken house and chickens from the site. She admits the land does not belong to her but says she has used it for the past 19 years and more time should have been given.

Couple Ann and John Townend say the end of their garden is “falling away” after the removal of undergrowth and trees.

Ann said: “There were cherry trees and bushes and now the whole lot is gone.”

Resident Steven Parsons said there are also concerns that the work is too close to a gas main and worries that there is asbestos on site.

He added: “We are disputing the boundary they have made. It is also on an old tip with cars and all sorts buried there and we are told the builders found asbestos.”

Tania McCullum says workers destroyed land belonging to her in order to create access to their site. She says the patch was a wildlife area enjoyed by her two sons who have autism.

She added: “Our gate and fence is broken, everything is gone and it seems we can only bring a civil case. We are really upset about the impact on the wildlife and the environment.”

Steven Mayhew, from development company, says a ‘mistake’ was made when access was created but denies there was a wildlife garden at the site.

He said: “The builder accessed the site in the wrong place. I apologised and (the owner) asked us to dig out their rubbish and put it onto our site. It was full of rubbish.”

Steve Parsons said residents are upset at the loss of wildlife and trees and says there was a lack of notification.

He said: “If someone had come down with proper notification we could have negotiated and there wouldn’t be all these problems.

“I think he (Mr Mayhew) should come to my property, speak to us and get this dispute out of the way.

“We want posts and fencing. There is a 5ft drop at the end of my garden and it is not acceptable. None of us can use our gardens, there is no privacy.” 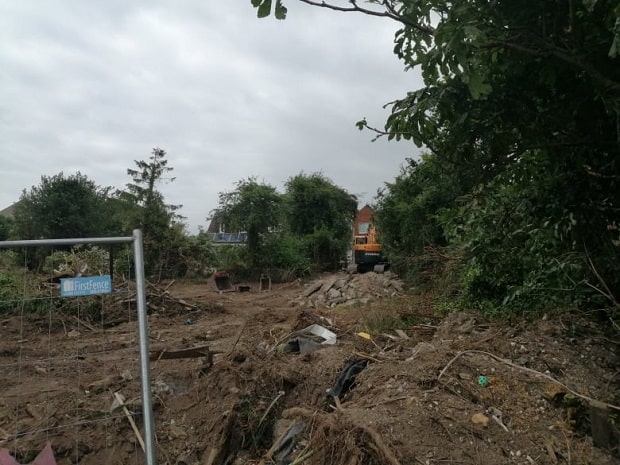 He said: “It is a bit of a mess. We were asked to go in for landscaping works by the owner but there has been so much trouble. We have spent 15 years working on complex sites and have never had anything like this.

“We were called in to clear and reclaim the owner’s garden, erect some fencing and then look at where we go from there.”

Green Party district councillor Becky Wing attended the demolition work at the request of a friend and says she was shocked to see the extent of the clearance.

She said a better way forward needs to be found.

She said: “Not only does it appear a resident’s land was part of this demolition/clearance work but there has been an extensive removal of habitat that seems to have been approved by TDC Planning at appeal.

“In addition, other residents gardens were left with overhangs as soil has been removed leaving exposed slopes that are now prone to erosion and falling away.

“What was really worrying when I first attended the site was the fact work was being undertaken within 10 metres of a high pressure gas pipe despite clear signage and that even the developer’s own planning applications states asbestos could be present.

“The planning  report recommends a full site investigation be undertaken but it is not clear whether this has been carried out.”

Cllr Wing added: “I hope the trees to be retained in the plans are properly protected throughout the remainder of the development, that the developer works with residents to find a better way forward and that TDC Planning ensures every aspect of the approved planning application is met to protect both people and our ever diminishing habitats.” 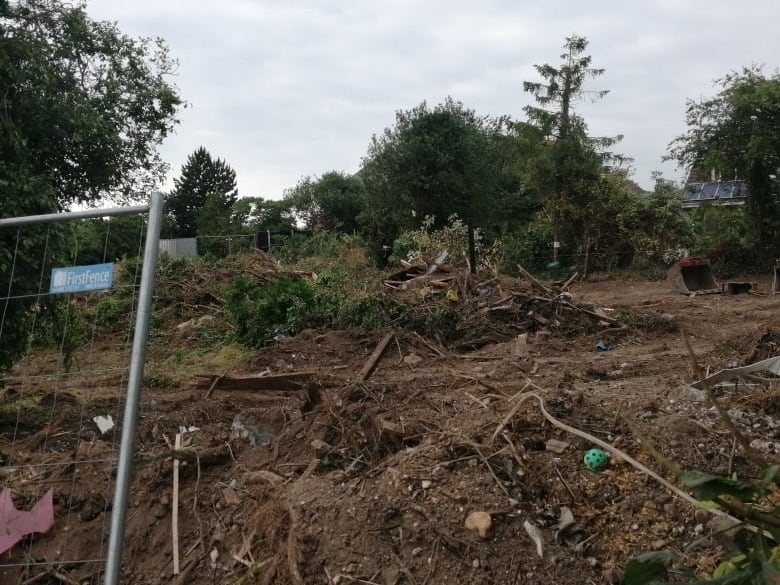 However, Thanet council says there have been no planning breaches.

“Our Planning Enforcement team visited the Clive Road site but found no breach of planning control on the site clearance works.

“We understand that other relevant authorities have been contacted relating to damage to neighbouring sites and the proximity of site clearance to a gas main.”

Mr Mayhew said a site visit had been made in regards of the gas main and no issues found.

Spokesperson for gas distribution company SGN, Waseem Hanif, said: “We attended the site to carry out safety checks near our pipeline. We found there to be no safety issues.

“If you’re a farmer, landowner or contractor planning to carry out work which disrupts land including excavating, ditching and drainage works, call us on 0800 912 1722. We’ll visit your site free of charge to help you plan your work and mark the location of any pipelines.”