Minster postman Phil Knowles created a buzz in the village yesterday (July 5) when he took part in an un-bee-lievable rescue.

The Ramsgate dad-of-three was on his round when he spotted a swarm of bees in the road after the Queen bee had been killed.

Phil, who handily has been a beekeeper with the Thanet Beekeepers Association for around the last five years, went straight into action to save the colony by coaxing them into a mail crate.

The 38-year-old, who has been a postie for almost 10 years, said: “I was at work delivering in Minster and had just finished the High Street. As I was parking up at the end of St Mildred’s Road I noticed the bees flying around the floor.

“I’ve been a Beekeeper with Thanet Beekeepers Association since 2016-2017 so upon seeing the two clusters of bees in the middle of the road I decided the best bet was to try and help them any way I could. 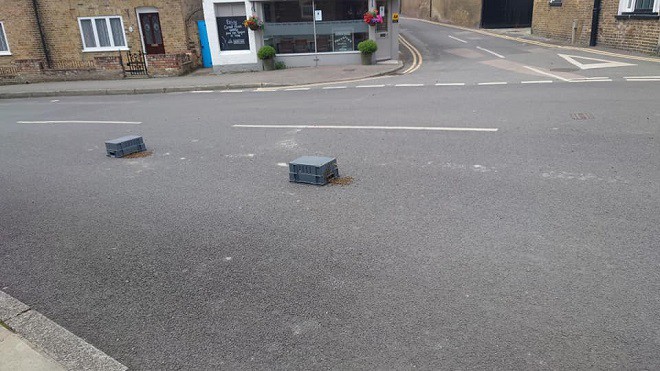 “I utilised a pair of mail sorting trays to try and protect the bees from getting squished by any more cars and began directing traffic around them. I messaged some fellow beekeeping members to see if anyone could help.

“There was a young woman who’ve I’ve spoken to several times before who was happy to stay with the bees and trays while I went to deliver the mail for St Mildred’s. Upon returning Jill and Steve -the fellow beekeepers- had arrived to help with some more appropriate equipment.

“Jill managed to coax the remaining bees into a small Nucleus colony which has been placed on the roof of the Corner House restaurant to potentially attract any other swarms into it.”

The rescue ‘sting’ was not only caught on camera by resident Timothy Lauret but the talented 17-year-old also then produced a hand-sized painting of the event.

Timothy said: “I’m a young watercolour painter who likes documenting events as it’s more solid than photographs. I have autism that fuels a lot of my interest. I sketch and paint buildings around the village and have been doing so for five or so years. To commemorate this strange event I decided to do a small and quick painting.”

Phil said discovering he had made it onto canvas left him speechless, adding: “I wasn’t aware of the painting until really late last night, I’d been busy after work sorting out my son’s 17th birthday present. It is truly an amazing work of art I was rather speechless to be honest.”