A river of dumped nappies, drink cans, household waste, a shoe and broken tiles can be seen in the gap running between the hoarding and wall at the former car wash site on the corner of Athelstan Road in Cliftonville.

Mounds of rubbish are continually being dumped in the spot where paladin bins had been sited until the end of October last year when they were removed.

It was hoped that getting rid of the bins, that were constantly overflowing and attracting seagulls which spread the rubbish even further, would solve an ongoing issue of flytipping. Seagull proof bags or black wheelie bins were issued to residents and a twice daily removal of any rubbish at the site was promised by Thanet council.

But more than eight months on residents are still plagued by streets filled with litter and dumped goods and a half finished hoarding at the car wash site. 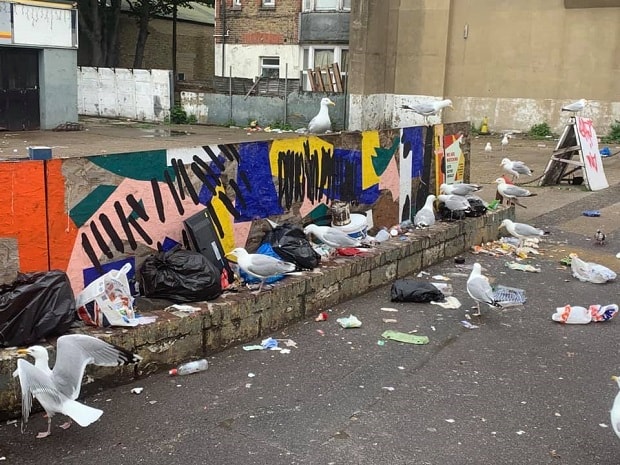 A new weekly litter pick organised by residents has been clearing eight to 10 bags of trash just from the hoarding ‘gulley’ each time.

Athelstan Road Tenants and Residents Association says enforcement has got to take place. 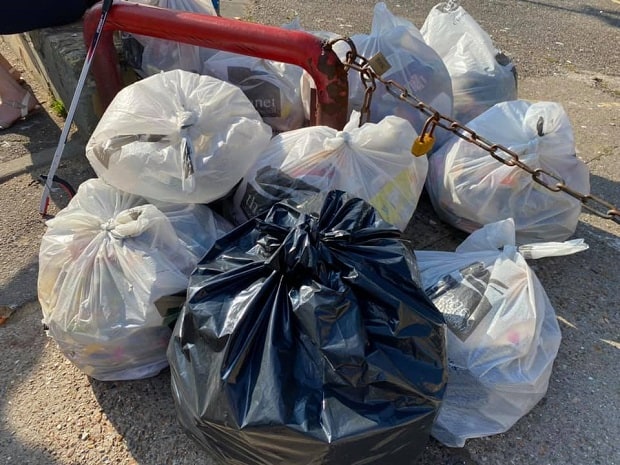 A spokesperson said: “Despite every apparent effort by ward councillors – particularly Cllr Alan Currie – almost nine months after the two Northdown Road end paladin bins were removed, on very longstanding and well established public health, fly tipping, dumping and misuse concerns by the community, ARTRA and council officers, the former car wash site on the corner of Athelstan Road and Northdown Road is still being used as landfill.

“This is not only by the tenants of certain HMOs, whose landlords have failed to comply with Selective Licensing officer requirements to provide their tenants with their own on-site waste storage, but also by people driving from other parts of Margate and/or Thanet, to effectively dump their trash on our doorsteps.

“Athelstan Road ought to be as civilised and clean a place to live as anywhere in the district, but with a total lack of enforcement – fining non-compliant rogue landlords significant financial penalties – the dignity which everyone is entitled to is denied the Athelstan Road community, as long as the tenants in two particular blocks literally have nowhere to put their household waste. 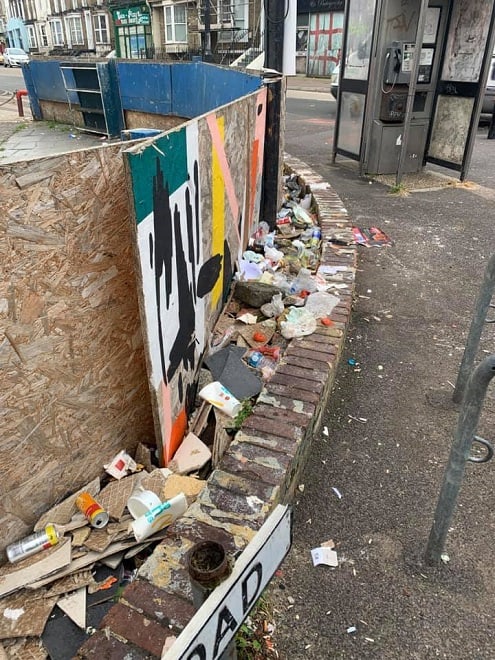 “It shouldn’t take nine months to enforce something as basic as a space for wheelie bins and/or seagull proof bags, but until TDC officers and executives impose significant fines on non-compliant landlords, this matter will continue to make several Cliftonville West streets some of the most dystopian in the district, if not the UK.

“Swarms of seagulls are habituated to ripping up bin bags of rotting domestic waste, including nappies and sanitary wear, dumped on the pavement, as well as the inadequate corner site boundary hoarding and the former car wash forecourt itself.

“This starts at 4:45am daily, causing sleep deprivation for the whole community, due to the presence of many dozens, if not hundreds of scavenging seagulls.

“Despite always having enjoyed a very positive two way relationship with all ward councillors, ARTRA is now calling time on this matter and demands urgent action.”

Cllr Currie said: “As we all know there has been rubbish and fly tipping issues on Athelstan Road and nearby roads for many years now, one of the main problems was the misuse of the communal bins, after many months of liaising with council officers, waste and recycling, leafleting all residents with information and the issuing of wheeled black bins to all residents where storage was possible, the two large bins by the car wash were removed, extra bins and recycling bags were issued as and when requested by residents in both Athelstan and Ethelbert Road.

“It became clear over time that many residents who live in the apartment blocks either side of the car wash in Northdown Road were still dumping their bin bags at the site instead of using other nearby communal bins.

“I have recently been informed by Thanet Council Selective Licensing that after officers visited this block a few weeks ago, wheeled bins will be provided at the rear of 75-85 Northdown Road for the residents to dispose of their household waste and these bins will be collected from Dalby Road on the normal collection.

“I have asked our street scene enforcement officer to contact the owners of the ex-car wash to request they fence off the entire area to prevent fly tipping and also ASB which is beginning to occur there since the site was closed. 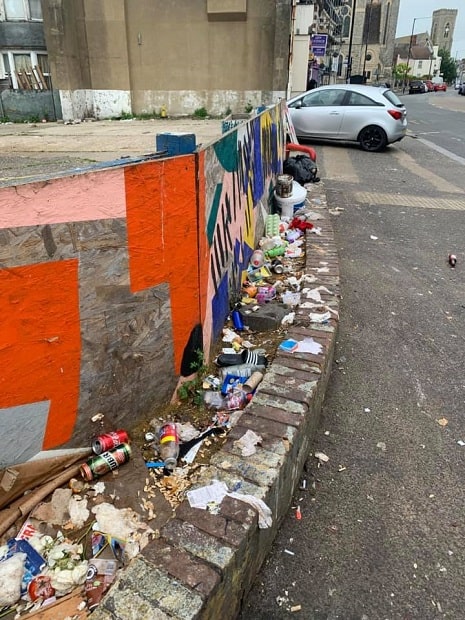 “Regarding wider rubbish issues in Cliftonville West ward, I requested during a recent TDC members briefing attended by officers and management that communal recycling facilities need to be provided in the area. At present there are very few places local residents can dispose of plastics, glass, paper and cardboard.

“If things are to improve in Cliftonville West then recycling rates must improve and all fly tippers caught on CCTV issued with fines. I would also like to say a big thank you to all the volunteer litter pickers in and around the area, this really makes a big difference to our area. I can assure all residents that I am also doing my best as one of your elected ward councillors.”

A Thanet council spokesperson added: “The large domestic waste bins at the corner of Athelstan Road were removed last year, following feedback from the local community and the ward councillor. Our Waste and Recycling team has ensured that all the residents who previously used these bins now have the appropriate waste containers.

“However, because of the frequency of fly-tipped waste, our Enforcement team undertakes regular investigations and the Street Cleansing team attends this area daily to clear the waste.

“There is a Selective Licensing Scheme in place, meaning that landlords can be required to make suitable arrangements for the containment, storage, and disposal of waste. Unfortunately not all properties are subject to this requirement, owing to the type of selective licence issued. Selective licensing cannot always be applied to the common parts of properties at which there are multiple owners.

“Nevertheless, the council’s Housing Licensing team consistently endeavours to help resolve any such issues brought to its attention, in collaboration with the council’s Streetscene team. There are four known properties on Northdown Road that are causing issues and these properties have been served Section S46 Notices (to contain their waste).

“We appreciate the frustration of residents who are trying to do the right thing and see others flouting the rules and dumping waste in the area. Selective Licensing, Streetscene Enforcement and Street Cleansing teams will continue to work in partnership to address these challenges and achieve an improvement in the location.”