Cartoonist Royston Robertson is holding an exhibition in Ramsgate that takes a shot at Covid-19, the lockdown and more.

Royston, 53, from Broadstairs, is a regular contributor to magazines such as Private Eye and The Spectator. He said he hopes the exhibition Long Time, No See, which is at the York Street Gallery from May 5-12, is a chance for people to get out of the house, now that Covid restrictions are easing, to see something new and – most importantly – to have a much-needed laugh.

“Laughing at adversity is what we do as a nation, I think,” Royston said. “I’ve had many cartoons published about the pandemic. This exhibition is a chance for people to come along and have a chuckle at these jokes as we start to get back to normal, hopefully.” 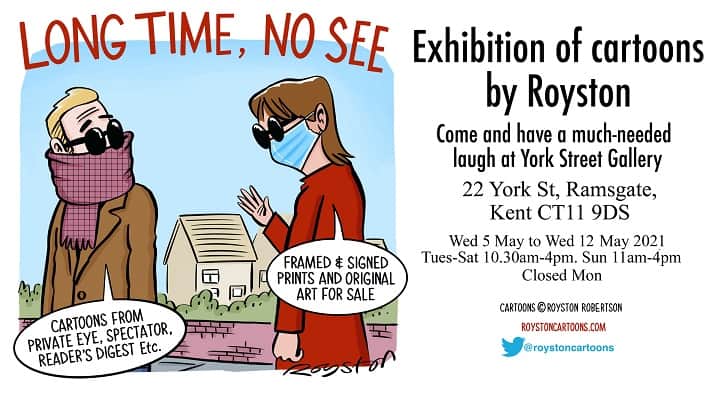 Royston is keen to point out that not all the cartoons are about Covid, the show will feature lots of his recent work on all kinds of subjects. There will be more than 60 cartoons, most of which are signed and framed prints that can be bought for £50.

“I have no idea if anyone wants to buy cartoons about the lockdown!” said Royston. “But they do work as a unique souvenir of these crazy times. Also, I’ve included lots of new cartoons on other subjects plus a few old favourites from previous exhibitions.”

Royston has previously exhibited his work locally at two of his favourite pubs: the Four Candles in Broadstairs and the Ravensgate Arms in Ramsgate.