Drapers Mills Primary pupils have embarked on a journey of discovery to celebrate the arrival of painting ‘Florence’ by international artist Stephen Farthing.

The huge painting, which is on loan to the school for 18 months from The Arts Council Collection, has inspired two days of arts rich learning for pupils across the school and has marked an exit point to the whole school term topic Journeys. 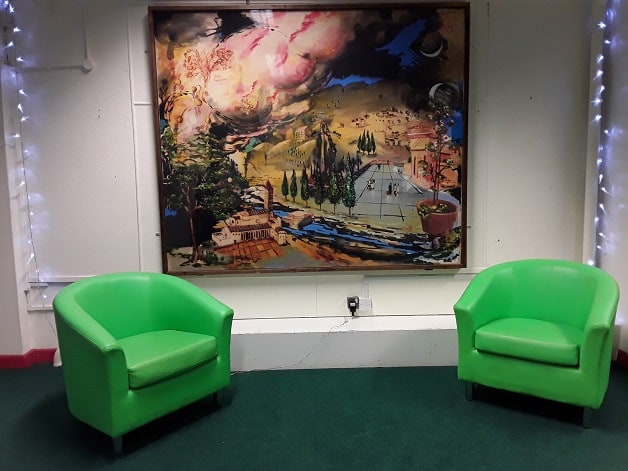 Speaking to the children via zoom, from Amman in Jordan, Stephen told of his remarkable journeys around the world, from Uruguay to Egypt, Australia to Italy and America to Japan.

It was during a trip to Kyoto in Japan that Stephen encountered the famous Samurai ninjas creeping across the singing Nightingale floor; appropriately named for its tuneful sounds that alerted the king to the presence of intruders.

More recently, a dangerous trek across the mountainous, rocky deserts of Jordan, Stephen felt inspired to create his current work ‘Last Flight from Aqaba’, when the only way of escape from the desolate landscape seemed to be via a magical flying carpet.

During the time of painting Florence, Stephen was deeply inspired by the Italian Renaissance and in particular artist Leonardo da Vinci.

“The drawings that most interested me were a series known as the ‘deluge’ drawings . These were made from a combination of observation and imagination during the last few years of Leonardo’s life when he was living in France as a guest of the French King.

“Each drawing of the deluge pictured a great storm overwhelming a landscape . Beyond these drawings I learned a lot from Leonardo’s work, in particular about how I imagined his mind might work. My painting Florence is a landscape, with a storm blowing through it and with the storm comes emotion and diverse thoughts – about Florence the city and the landscape beyond, about Renaissance painting and drawing . It was not painted from life, it was invented, as such it is an imagined place.”

She said: “Florence is a truly amazing painting which fills one of the largest available walls of our school. There are many different themes running through the painting, such as oceans and rivers, the phases of the moon, an almighty storm overwhelming the rugged landscape and historical settlements, all of which link back to each year groups focus on Antarctica, space exploration, the Bronze Age and mountains, rivers and the ocean.” 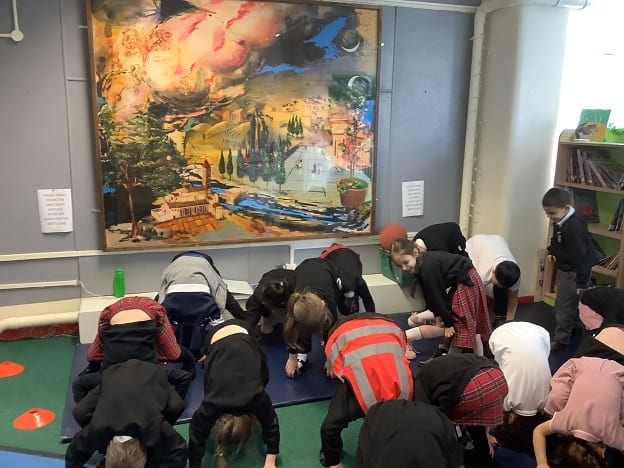 Each class had the opportunity to visit the painting; year 1 particularly enjoyed viewing the painting from a multitude of angles. 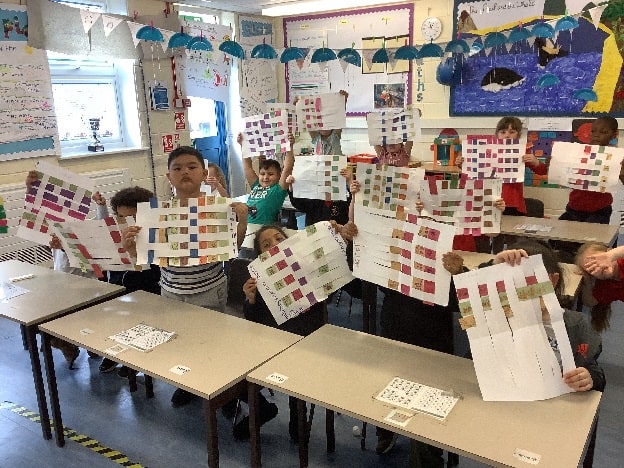 KS1 children studied Stephen’s beautiful flying carpet paintings and used weaving techniques to create their own, which were then flown across the playing field just before lunch! 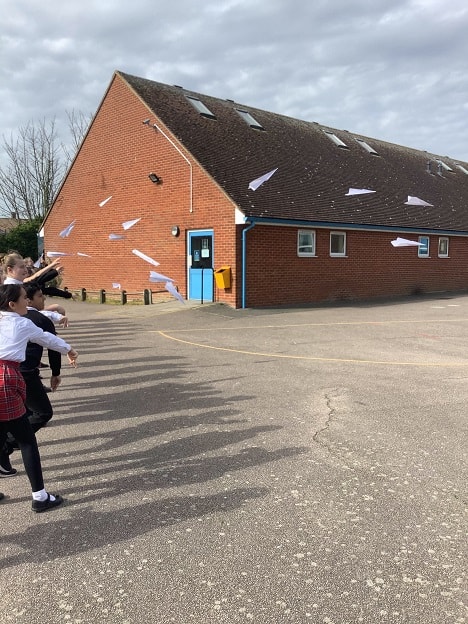 KS2 began their journey by first choosing their mode of transport – plane, boat or space rocket, before testing their designs across land, water or sky. 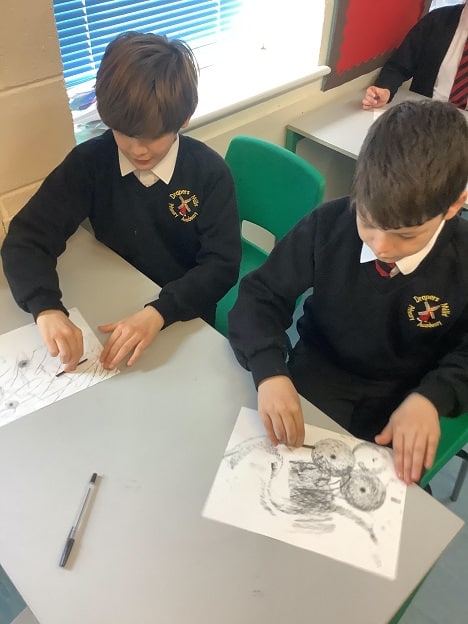 Next, it was a battle through the elements for all year groups – with an exquisitely beautiful flow of ocean inspired artwork from KS1 and a cataclysmic storm concocted using charcoal in KS2, both inspired by Leonardo Da Vinci’s artwork, the Deluge. 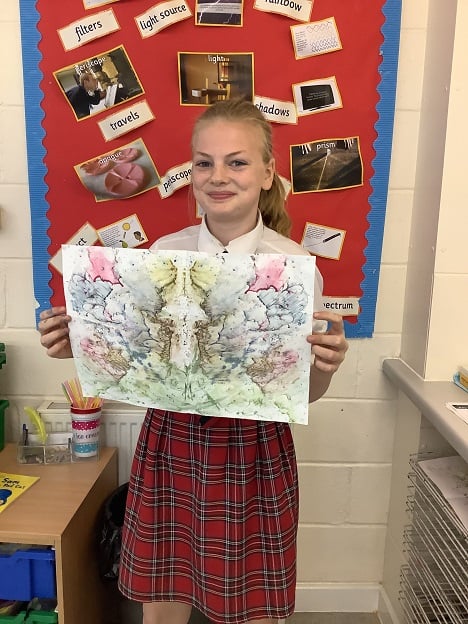 It is said that Leonardo da Vinci advised a budding artist with creative block to leave behind his blank canvas and stare at the stains on walls. From this way of thinking, blot landscapes were created using watercolours on cartridge paper – spontaneous mark making and unusual tools were used, which are all techniques that encourage the viewer to search for meaning in chaos, and objects in accidental shapes. 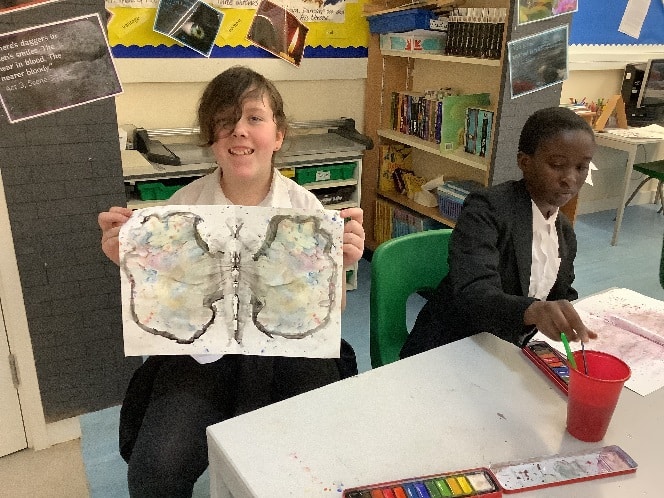 Next children created mail art – an art movement based on the principle of sending small scale artwork through the post – Stephen is looking forward to receiving some of the postcard style art very soon. 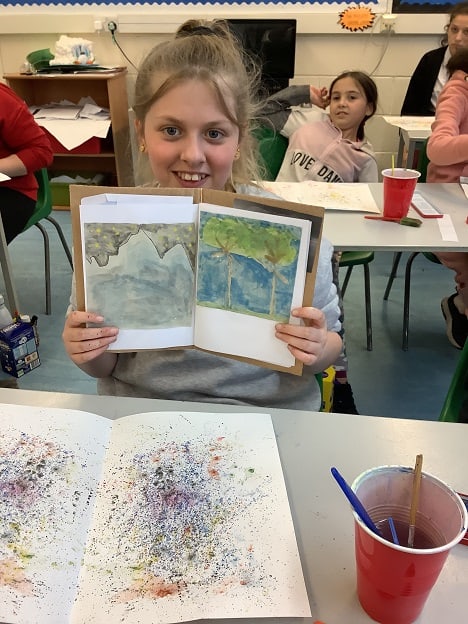 Each child learnt how to make their own scrapbook journal, which was filled with their artwork and stories of their imagined adventures.

Mrs Comber said: “As part of our Artsmark journey, we’ve been exploring new ways in which we can bring more of the arts to our children during a time of unprecedented change and worry.

“The children have relished the chance to engage with an original artwork and its artist. Authentic experiences create unique opportunities and inspire a true love of learning which will stay with the children for the rest of their lives. 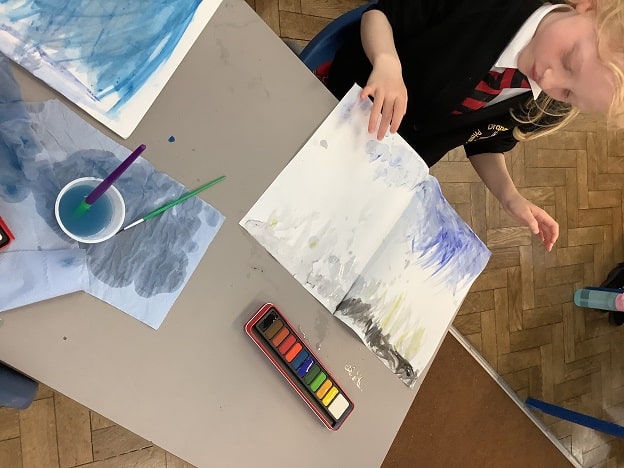 “Through the arts, children learn how to communicate, imagine and create in a variety of ways, which they need in order to understand the complex world we live in.”

The children were thrilled to get to ask Stephen questions at the end of his presentation. Many were interested to find out how long it took for him to paint Florence -about 3 months – how he became an artist, where he was going to travel to next and whether he had met any real life samurai warriors!