Staff working at the ‘EU exit’ lorry park at Manston airport say they were not given notice that the site would be suspended from March 21.

On Tuesday (March 9) the Kent Resilience Forum – made up of agencies including Kent Police and local councils – announced the site would not be in use after that date although operations could be resumed if necessary.

That decision was confirmed by Parliamentary Under Secretary of State Rachel Maclean MP.

Freight heading for the Port of Dover will no longer be directed to attend the site at the airfield and it will no longer offer Covid-19 tests or customs checks for hauliers.

Hundreds of staff work at the lorry park on temporary contracts but these were expected to run until the end of June.

It is understood there will be opportunities to transfer to other sites including Ashford, Thurrock, Ebbsfleet and a new one being developed at Guston.

The contract to use part of the Manston site as a lorry park was extended until the end of June 2021 in a deal made between landowners RiverOak Strategic Partners, former landowners but lorry site operators Stone Hill Park and the Department of Transport. This contract remains valid meaning operations can be stood back up if needed.

The site came into use earlier than the planned January 1 date after the French government closed the border to UK travellers and accompanied freight going into the country shortly before Christmas over fears of the spreading ‘Kent’ variant of covid. 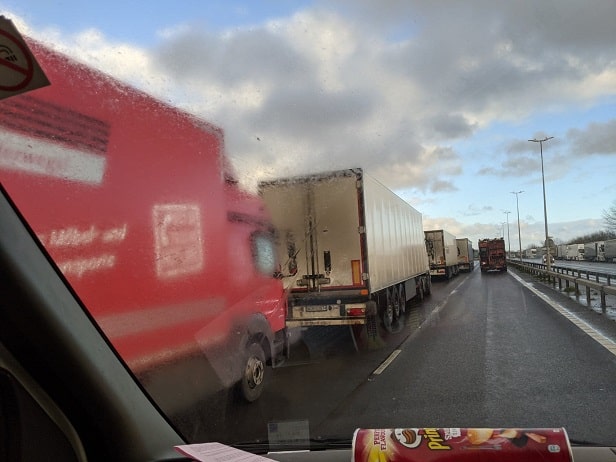 The move led to the site being parked up to capacity with a large backlog of HGVs on county roads.

Staff who expected several more months of income now have just weeks of work at the site if the suspension goes ahead as planned although it is understood personnel will be kept at Manston until April 3 while the site in Ashford is ‘stress tested.’

One worker said: “I’m obviously disappointed that the contract is coming to an end. It was a lifeline for many of us who have found ourselves out of work due to the pandemic and we were hoping it would last long enough to see us through until the lockdown is lifted so we can go back to our respective professions.

“But despite the disappointment it has been a much welcome source of income during these very tough times and for that at least I’m grateful.”

Operations at the lorry park are carried out by a number of firms including Right Guard, which recently hit the headlines when allegations were made of operatives taking and distributing drugs. It was also revealed that lorry drivers had faked covid test results in a bid to travel out of the UK. 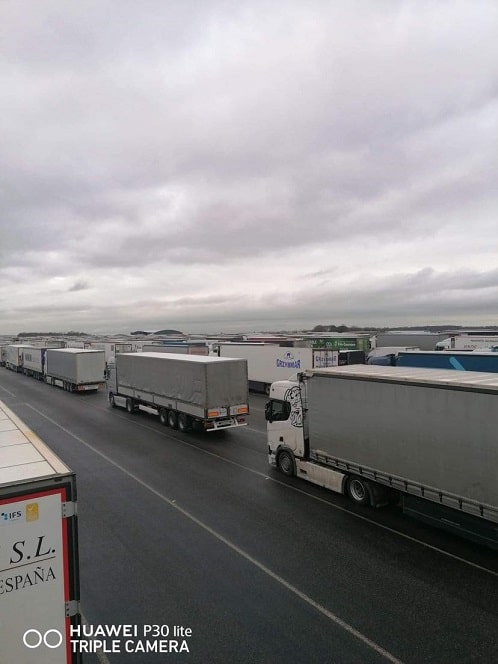 There have also been claims of confusion about employment status amongst some staff who have told The Isle of Thanet News they believed they were being taken on as employees but found that contracts were for self employment.

Three workers said when they wanted to query the PAYE status of wages and ask about sick and holiday pay they were directed to the employer named on pay slips. These were different employers for the three staff and The Isle of Thanet News has contacted two of those to ask for a response. One staff member said they have now contacted HMRC and ACAS (Advisory, Conciliation and Arbitration Service) for advice.

Staff have also claimed they were uncomfortable with security searches of workers carried out “inside hi vis” garments and “in public view” to check for drugs.

One said: “No-one objects to searches for drugs or drug testing as you do not want that on site but we were not happy with the way it’s done.”

‘Safety and welfare of officers’

Right Guard says all searches fall within the law and will continue so as to maintain safety and welfare for officers on site. The company, through its solicitors, said it was not able to discuss individual contracts.

The statement – sent by Griffin Law on behalf of Right Guard – adds: “There are around 600 operatives on site; some are employed and managed by our client and some by other organisations operating on site that are not within our client’s contractual control.

“With this number of people on site, as well as thousands of lorry drivers from all over the world, many of whom are desperate to cross the border and were particularly so over the Christmas period, as expected there have been incidents that our client has had to manage.

“However, they maintain that they have dealt with every matter reasonably, rapidly and involved the relevant authorities where necessary. For example, it was brought to our client’s attention that some lorry drivers were seeking to cross the border with fake test result paperwork. Our client immediately notified Kent Police who set up an investigation and the matter was resolved and continues to be monitored by our client in conjunction with the relevant authorities.

“Where operatives have been found in minimal instances to have been involved in misconduct on site, our client has dealt with this appropriately and quickly to ensure that the site continues to operate in a controlled manner.

“We are aware that some operatives have threatened to go to the press with numerous unsubstantiated, and we note disputed, allegations about the operation of the site upon being dismissed or being provided with a warning. Such allegations have not been evidenced as far as our client is aware and should specific instances be brought to our client’s attention with evidence, then they will consider providing an appropriate response.

“Our client confirms it is not able to discuss individual contracts. Our client, Right Guard Security UK Limited, has ensured that appropriate due diligence is operated and are satisfied that operatives are paid compliantly. One of the companies mentioned is part of Right Guard’s labour supply chain, however the others are not known to them.

“It has been confirmed that the security searching will continue both as routine and random 24 hours a day to maintain the safety and welfare of all officers on site. As previously stated, any person found with any unlawful prohibited item or drugs/drugs paraphernalia will be dismissed from site and reported to the police.”

A Department for Transport spokesperson said concerns were being investigated with the company that manages the site.