An historian from Margate has teamed up with eminent military expert Andy Robertshaw in a bid to preserve and relocate some rare World War One machine gun pillboxes discovered at Botany Bay.

Phil Hodges, who works in the film industry and also writes for military magazines, and Mr Robertshaw, who is a military adviser for the movie industry and has worked on films for Stephen Spielberg, War Horse and blockbuster 1917 from Sam Mendez, are in talks with organisations including Thanet and Kent councils about the irreplaceable war constructions.

Sir Ernest William Moir produced a design for the concrete machine gun pillboxes constructed from a system of interlocking precast concrete blocks, with a steel and concrete roof. The box acted as a camouflaged firing point for the machine gunner inside.

Around 1500 Moir pillboxes were produced with blocks cast manufactured at Richborough and these were sent to the Western Front in 1918.

Dad-of-three Phil explained: “They were designed to be shipped to France and Belgium for use in the frontline trenches during World War One. That’s why they were in sections, so three or four men could pick those up and move it through the mud and barbed wire. 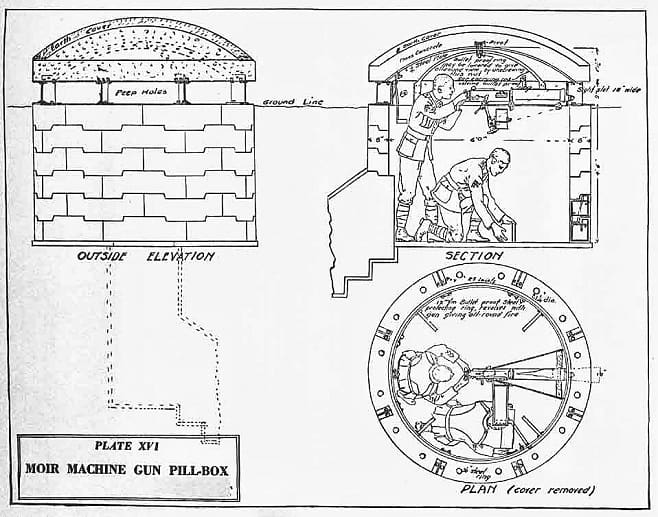 “They were designed quite late into the war, in 1918, but there are several surviving in Belgium – two in Ypres – and in France that were used in action. 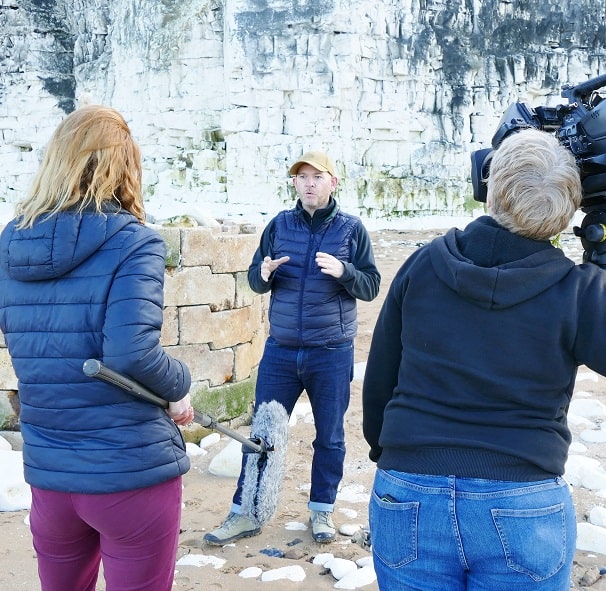 “After the war the country was in recession and the company had a lot of those concrete sections left over. In 1921 they auctioned them off to road companies, local councils etc.

“Thanet’s council bought some, as did Canterbury’s council, and in Thanet is you go along Percy Avenue you can see they were used on roads and for walls along front gardens. In Sandwich they were used for a roundabout.” 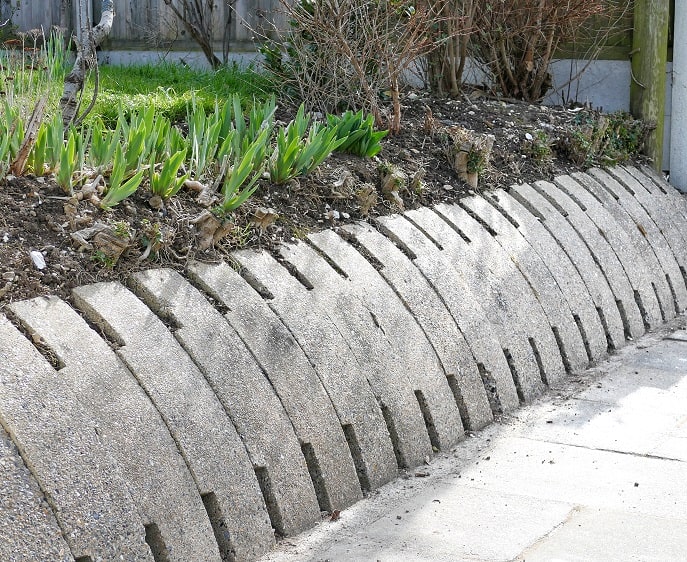 It was in World War Two that the pillboxes were installed between Botany and Kingsgate Bays – and also Dumpton Gap – for experimental use by the Army to create a flame fougasse.

Phil said: “They took the concrete pill box segments that were laying around and built two sections going out to sea. On top they had a pipe and sandbags on top of that. Oil and petrol would be used to go through this and out to sea to set it on fire when the Germans came. It was very barbaric.

“Thankfully it was never used but has stayed there ever since. I remember seeing them as a child, sometimes they would be covered in sand and other times you could see them.” 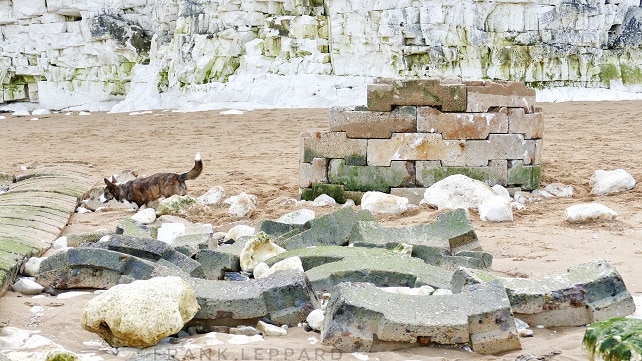 Until recently the structures were believed to have been part of an old sewer pipe but a week ago Phil was approached by someone who recognised the parts as Moir pill boxes.

A group of volunteers has since started putting the pieces together and has completed one pill box – minus the roof and steel ring used for the machine gun – and Phil believes there are enough pieces to put together two more of the pill boxes. 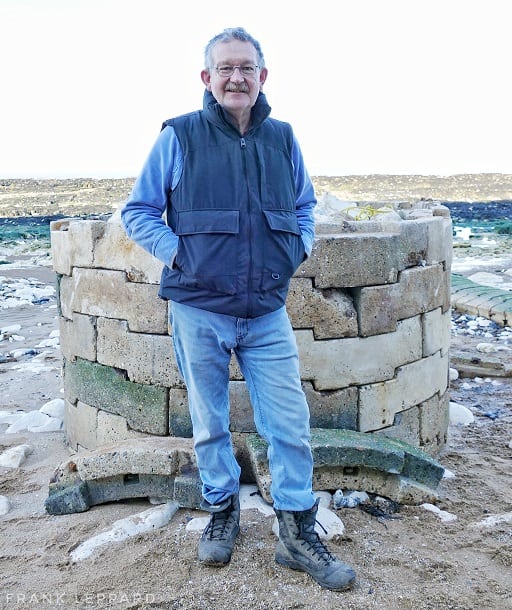 He said: “Andrew Robertshaw (pictured above) lives in Kent and is a friend of mine. I said to him to come over and we could have a walk down and take a look. We went and saw all the volunteers build this fantastic pill box.

“But it is not protected where it is and is at the mercy of the tide and other things. Luckily it is in an area not accessible by vehicle, on soft sand and uncovered at low tide.

“But it is quite rare and of archaeological interest.”

Phil and Andy are hoping to get permission to reassemble the pill boxes in areas that are safer but where people can go and look at them. One could be destined for the Kent County Showground where Andy is involved in creating a full size World War One trench system replica for educational use. It is the fifth such replica Andy has created for film or educational purposes. 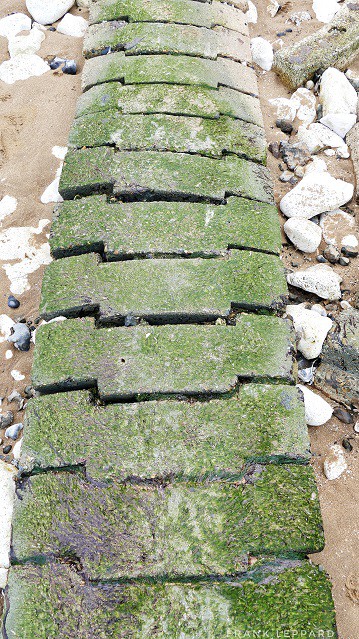 The remaining two pill boxes could be sited in Thanet or elsewhere in Kent. Replicas of the steel roof and metal machine gun ring would need to be made to complete the construction.

Phil said: “We are trying to raise awareness so these can be registered and recognised as surviving pill boxes.”

The pill box that has been substantially rebuilt at Botany Bay has attracted much interest from passers-by and members of the Thanet Hidden History face book page where Phil – who is a group subscriber – shared details to go with images taken by Margate photographer, and hidden history admin, Frank Leppard.

The family behind the reconstruction

The residents who took to reconstructing the pill box were Trevor Cooper, wife Linda, son James and his fiancée Lauren Drayton.

The family, who all live in the same property in Cliftonville, began the build on March 5.

Matalan staff member Trevor, 58, said: “My wife, son and I took a walk between Botany Bay and Kingsgate Bay. It was during this walk that we wondered how easy it would be to fit the large stone blocks together. These are blocks that we had seen and had been walking past for decades. We specifically only used the loose blocks laying around. 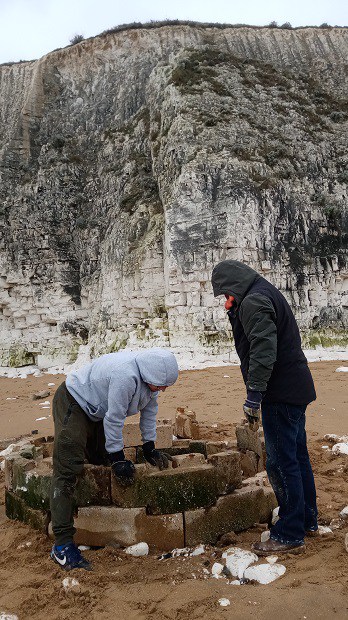 “With great vigour, the three of us had put together a ring, two levels high, of the Richborough Moir Blocks.

“The Moir Block is an interlocking block and these blocks were built in Richborough for use in pillbox construction on the Western Front in World War One. I found that out thanks to Andy Temple in the Thanet Coastal Finds group after we built two levels and I then asked about it on the group. Andy educated me on their use, before we continued with the build.

“The next day we built the pillbox three tiers high, then the Sunday my son and his fiancée made it five high and on the Monday we made it six high.

“A concrete fence post was found on the beach and repurposed as a central feature. Rocks were placed inside for strength and a buoy tied to ensure the visibility of the pillbox during high tides. 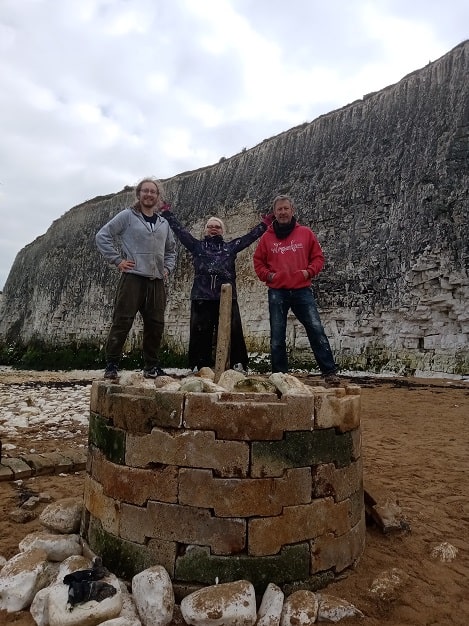 “Separately, the long line of blocks laying nearby, I understand, were placed during World War Two. They cover old petroleum pipes put in place to set alight the sea should the German invasion land on our shores.

“It’s been a pleasure to build the structure that has been free to make and free to visit. I hope it has brought pleasure to many more.”

Trevor said he would like to see the pillboxes remain in Thanet.

He said: “They were made local, laid local and us locals built the pillbox. It belongs in Thanet. Perhaps it could go to the RAF Manston Museum.

“There are another 50 plus loose blocks. Also the original structures, used to hold up the petroleum pipe, should remain in place where possible as that is history in itself.”