At the end of 2018 former consultancy business worker Ryan Day had lost a large percentage of the vision in his left eye resulting in having to give up the job he loved and having to hand back his driving licence to the DVLA.

Ryan, just 28 at the time, says the loss of work and being able to drive hit him hard and he lost his way in life.

In the July of that year the former Margate FC media manager and then CEO said his eyes started to become sore but he put it down to the daily drive from Thanet to Folkestone, booking an eye test  just to get checked.

Ryan, who lives in Broadstairs with his cat Olive, said: “I didn’t think it was that important. When I arrived they did tests and scans and it turned out I had a hemorrhage behind both eyes.”

The cause of the hemorrhaging was a mix of Ryan’s diabetes and an existing brain condition called Chiari malformation where the lower part of the brain pushes down into the spinal canal.

This was causing pressure that was contributing to the bleeding of vessels behind Ryan’s eyes. 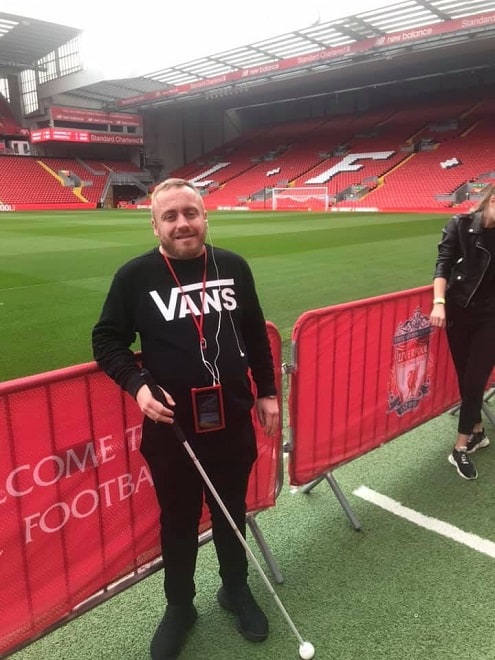 Ryan said: “I was in hospital the next day for laser surgery. It was a bit of a process but through September and October I was still getting by. But in December 2018 I suffered further eyesight loss in my left eye and it time that got progressively worse due to the pressure from the brain and the diabetes.

“The biggest down point for me was in the December when DVLA said I had to return my driving licence and I had to give up work.

“I lived for my work, right back from working at Margate FC, and I also loved driving and the independence of that.

“It was at that point that I really lost my way.”

The loss of independence was keenly felt by Ryan who had been immersed in work since qualifying in sports journalism at Southampton’s Solent University and going on to his role as media manager at Margate FC and becoming the youngest football CEO in the country when he took the helm aged just 25. Two years later he decided to take a completely different path, going into business consultancy.

For Ryan help came in the form of the Kent Association for the Blind.

There was information, advice and training to use a white cane. Despite popular belief many people using canes have not lost their entire sight, around 96% of cane users have some vision. For Ryan there is little vision in his left eye but he has sight in his right eye.

The former Hartsdown student said: “KAB helped me get back on track. I use the white cane most places, unless it is somewhere I really know. What KAB gave me was the confidence to get back involved with things and I can still do some writing with the aid of technology. These were all things KAB helped with.”

Ryan, now 30, is now partnering with KAB to raise awareness and change perceptions of visual impairment.

He said: “Only 4% of people in Kent with visual impairment have no vision at all. Something I have encountered is people seeing the white stick and assuming I can see nothing.

“It has been a tough few years since my eyesight loss in 2018, going through many different emotions and my family experiencing them as well. But KAB has been a positive and partnering with them helps me to help people understand more about sight loss, how important it is to get your eyes checked and for people to realise this affects all ages, young and old.”

Superheroes challenge for Kent Association for the Blind

Ryan is helping KAB to promote an event running at Margate FC next month.

The club is hosting a superhero fun run for the sight loss charity on August 15. There will be a 5k and 10k run from 10am, taking a route along the seafront, followed by a family fun run at 11am.

All ages are welcome and runners are being urged to turn out in their best super hero outfits.

All entry fees (minus booking fees) will go directly to help to fund the Kent Association for the Blind’s work.

There will be lots of activities on the day at the Race HQ at Margate FC, including stalls and a mini-event village.

Runners are asked to get sponsorship via a fundraising page which can be set up via www.justgiving.com/kab.

A £100 target could help pay for an Eye Clinic Liaison Officer to provide essential emotional and practical support within a hospital for a day.

Every race finisher will get a unique medal.

KAB supports sight impaired people to live independent lives. They work with over 12,000 people with a sight impairment in Kent and the surrounding areas. 2020 was KAB’s centenary year. Due to last year’s restrictions this milestone will be celebrated this year.

Find out more about KAB here

Sign up for your spot at the superhero run here