The row about the proposed one per cent pay rise for NHS staff continues with Prime Minister Boris Johnson defending the amount but opponents calling it an insult.

The proposed pay rise, which will need to be agreed by an independent panel before going to Ministers this May, is the only rise for public sector workers.

Government says the impact of covid means there are financial constraints and the 1% rise is what can be afforded. Other public sector workers pay, such as for police officers, has been frozen.

But the decision has caused a backlash.

Thanet nurse and Save Our NHS in Kent campaigner Candy Gregory has accused the government of betraying health workers over pay. 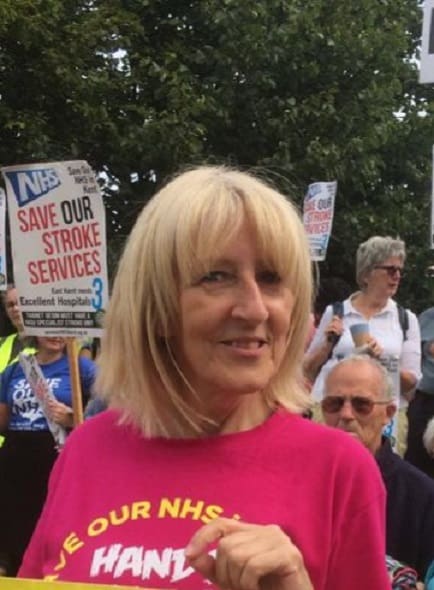 The independent Thanet district councillor, who left the Labour group last year, said: “The government’s suggestion that NHS workers, after all they’ve done and gone through, should now get only 1% pay rise is a gross betrayal.

“Throughout the past year, NHS workers have worked extra shifts to cope with this government’s horrendous mismanagement of Covid-19 battling in understaffed and over capacity wards and departments with lack of effective PPE. They have seen around a thousand colleagues die and many more battle with long Covid.”

Candy says NHS workers feel betrayed: “The day after Budget day we learned that our NHS workers, whose pay had already fallen to insultingly low levels over the years, were being given a paltry 1% pay rise. Effectively another pay cut.”

Candy says the suggested pay rise is likely to have a negative impact on NHS recruitment.

She said: “This is a system already plagued with chronic staffing shortages. We have 100,000 job vacancies overall, 45,000 nursing vacancies. After this government announcement, we will now have many more wanting to give up their demanding, stressful,  financially unrewarding careers.

“We cannot afford to lose any more, at the risk of patient safety.

“Even the Royal College of Nursing not known for its militancy, is accumulating a strike fund. This is how angry people in the NHS are.”

North Thanet MP Sir Roger Gale has also called for a rethink on the level of the rise but says it must be a fair decision made by the pay review board.

He said: “One per cent, which will be more than eroded by inflation, may be the opening shot in a pay negotiation in response to an unacceptable 12% Union demand backed up by the threat of strike action but it is most certainly not “a reward”.

“The Government must take a pace back from what has become an unseemly political football game, allow the pay review body to determine what is right and fair and just and affordable and then, under these exceptional circumstances, accept the result and foot the bill without challenge.

“The alternative by way of “reward” (in addition to a negotiated pay increase), which some have found attractive is a sizeable tax-free one-off payment.

“Unless I have grossly mis-read opinion those who have had occasion to call upon the services of the NHS during the past twelve months, and probably most of the rest of the adult population as well, believe that notwithstanding the state of the nation`s finances the promised and genuine reward for service has to be forthcoming. We must send a clear message to the NHS. We keep our promises.”

The Royal College of Nursing Council has responded to the pay increase level by setting up a £35 million industrial action fund.

A strike fund is an amount of money that can be used to support workers, who are members of a trade union, to provide some compensation for loss of earnings and campaigning during industrial action.

RCN Council says it is determined to have the finances available to members should they wish to take industrial action.

PM Boris Johnson said there is gratitude for those in the nursing profession and that there are 10,000 more nurses this year than there were last year with recruitment figures rising.