Two friends from St Peter’s are launching an artisan sausage company this month.

Oliver had previously sourced the sausages for his Broadstairs cafe from town butcher W.A. Hazells but when owner Nick Heasman retired in March last year after 38 years of business, Oliver’s hunt for a supplier who could provide a product of a similar high quality proved difficult.

Nick oﬀered to provide training and advice on how to make their own, so in summer 2020 Oliver and Wally started producing sausages for use in Beaches.

Having identiﬁed a gap in the local market, the friends have taken the next step and established the St Peter’s Sausage Company as a new business, investing in setting up a dedicated premises in Margate to produce sausages for local restaurants, cafes, hotels and stockists. 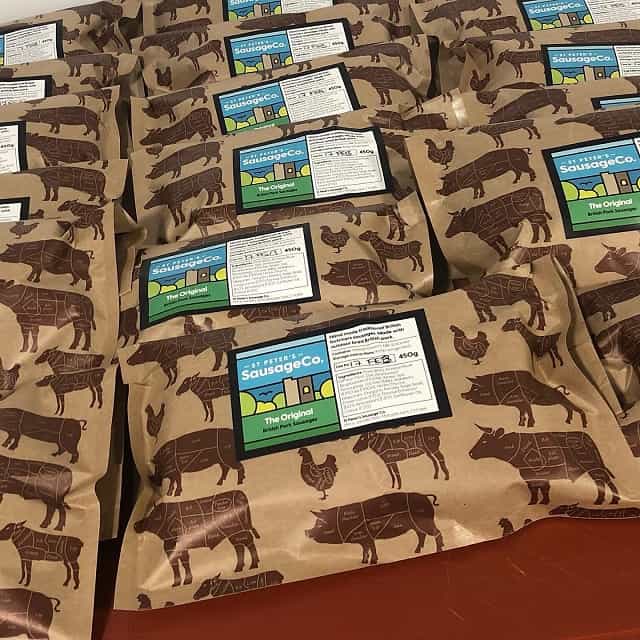 They will also supply sausage meat direct to local artisan bakers for use in their products. Initially they will be taking orders for direct sales via social media and will have a stall at the Cliftonville Farmers Market each month. They attended their first market at the end of last month.

“By selling direct through Facebook and Instagram, supplying local farm shops and independent grocers, and the local catering market we will bring our product to a broad audience of customers.

“This focus on the quality of the ingredients is combined with traditional production methods taught by Nick.

“Our plan is simple, we take really good ingredients and use tried and tested techniques to turn them into really great sausages”.

All the sausages are made using natural sausage casings and are mixed, stuﬀed and tied by hand to produce traditional thick, well ﬁlled butcher’s sausages with a minimum meat content of 85% – which they were alarmed to discover is more than twice the legal minimum for a pork sausage.

Initially focusing on producing a core range of pork sausages, including ‘The Original’ a plain pork sausage using a recipe and blend given to them by Nick, the St Peter’s Sausage Company will also be expanding the range as well as oﬀering trade customers the opportunity to work with them to develop their own bespoke blends for their own house sausages.