The first jabs are now taking place at Thanet’s large-scale vaccination centre at the ‘for sale’ Saga building in Westwood.

More than 100 staff are currently working at the centre which will begin with hundreds of jabs per day and build up to thousands.

The first group to receive their vaccinations at the site are those aged over 65 and those of all ages who are extremely clinically vulnerable. Appointments must be booked and can be done on the national booking website or by calling 119.

The next cohort will be those aged 60 and over and people of any age with long-term conditions such as asthma and diabetes.

The former Saga call centre, off Haine Road  was closed by the firm in January when 600 employees started working permanently from home. 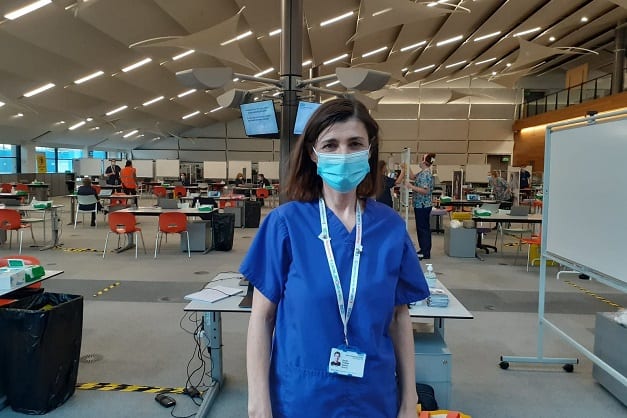 Medical Director for KCHT, Sarah Phillips (pictured above) said: “We will start by vaccinating hundreds of people a day and as we build up this will get to thousands each day.

“We have more than 100 staff at the centre and, across Kent and Medway, we received 5,000 applications so thousands have been appointed across our big centres.

“Some of our staff are retired and coming back to help, some are working on top of their usual jobs and we have an army of volunteers helping to make the centre run smoothly.

“People have been working around the clock to get the centre ready. Our original smaller centres and then the three large sites already running have helped us build expertise among our amazing teams.” 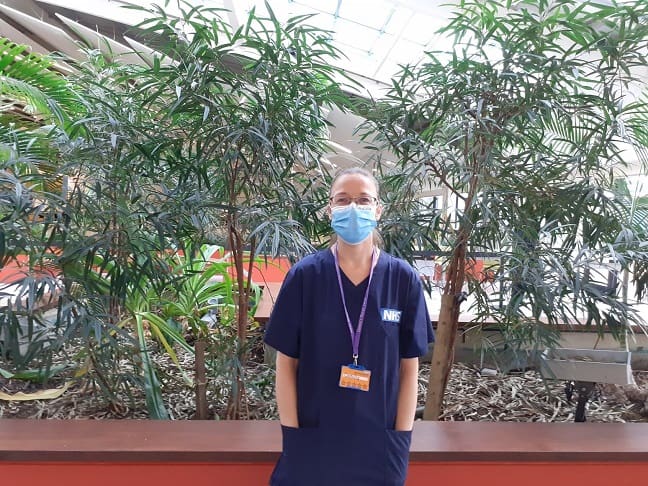 Among the staff at the Thanet site today is KCHT deputy head of nursing services for areas including epilepsy, Caroline Knott (pictured above).

The Ramsgate mum-of-two should be on annual leave but said she had to be involved with the opening of Thanet’s site.

Caroline, who also spent time working at QEQM Hospital during the first wave of the virus, said: “This is so important so we can all get back to normal. My father has been unwell and I want to be able to go and see him and this is about that for all of us.

“When I was redeployed at Margate hospital I saw the effects of covid and we want to prevent this and get people better. I should be on annual leave but, coming from Thanet, I had to be part of this centre opening.”

Caroline says the aim is to get us to a place where people can start socialising again. She added: “I worked at the Folkestone centre last week and the good thing was getting out and seeing people and the dynamics of the team. Everyone has been really welcoming.”

The centre, which received a visit from McDonald’s staff this morning with doughnuts for the vaccination workers, is large and has lots of facilities on site for those working there, including a canteen, ‘wobble room’ for any patients feeling unwell and storage for PPE and vaccines.

An area on site is also being used by GP hubs from Margate/Mocketts Wood and Bethesda for their vaccination programme, giving even more scope for progression through the cohort groups. 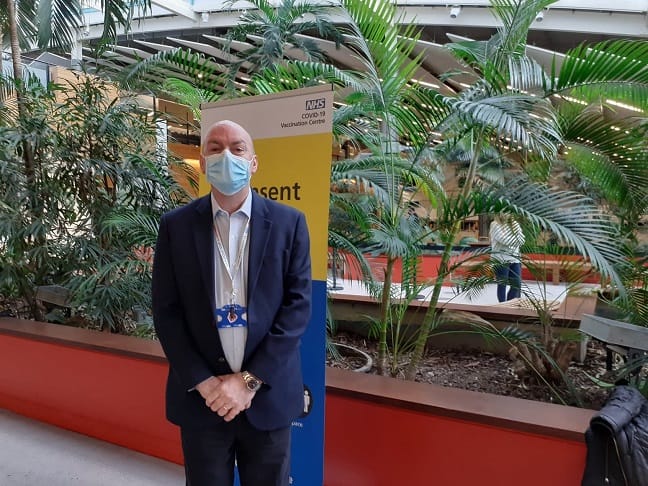 KCHFT Chief Executive Paul Bentley (above) said: “It is great that we are open for business today. This is site number four in the programme and we are really pleased with it, it is very user-friendly. It is easy to get to and has good car parking space, it is light and airy so will give people confidence to come to the centre.

“Across our centres we are vaccinating people who have not been outside of their homes for a long time. We are keeping people safe and they are coming here to a safe space.

“We will build up during the course of the week, going from hundreds to thousands of vaccinations.”

Mr Bentley is urging people to not just turn up and to arrive on time -rather than early- for appointments. Booking can be done online or by phone and many people will be receiving letters with a code to input to get their appointment.

He added: “People will be vaccinated and then in 12 weeks time they will come back for their second dose.” 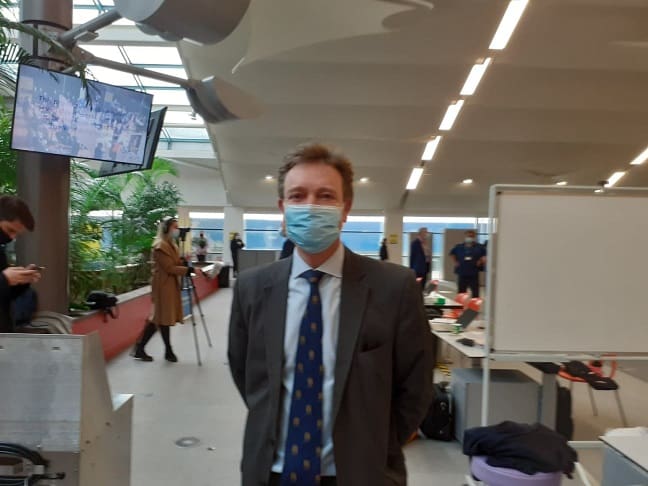 South Thanet MP Craig Mackinlay put the site forward as an alternative to the original plan which had been the DW Sports site at Westwood Cross.

He said he believes the Saga centre has made the “best” site possibly in the country.

He said: “Thanet, and Kent, has a facility here that is  as good as -if not better- than any in the country. It is near bus routes, has  parking, it is modern and airy with catering facilities and oodles of toilets.”

The MP is currently in talks with Stagecoach to request a diversion of bus routes so drops can be made directly to the vaccination centre.

County Councillor Karen Constantine said: “It’s absolutely fantastic to see the Westwood Saga site has now opened as a Covid vaccine centre. I’m sure that we are all extremely grateful to the staff and volunteers. I sincerely hope all those offered the vaccine will take up the opportunity offered to them – as it provides protection for all of us.”

She added that with tens of thousands of patients nationally waiting for over a year for other procedures there had to be help for an NHS that “is now facing a mountain of unmet need.”

She added: “Getting the vaccine on offer is simply brilliant. Getting back to ‘normal’ is 100% what we all want. But with this backlog and our NHS staff tired and exhausted, we need to see our local politicians really pulling their weight to fix the problems in our NHS that were there pre-Covid and have grown since.”

The Thanet site is now open seven days  week from 8am to 8pm. 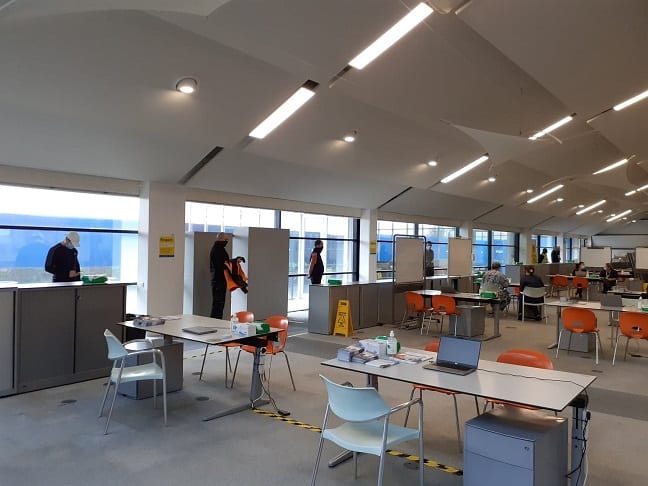 You can make an appointment by phoning 119 or visiting www.nhs.uk/covidvaccination. Anyone who is in a higher priority cohort (over 70, clinically extremely vulnerable or health and social care staff), can also book at any site.

People who book will have a pre-vaccination assessment before they receive their vaccine. Appointments are staggered to allow for social distancing and people are urged not to turn up early to avoid queues. Anyone having the vaccine will need to wait for 15 minutes before driving. 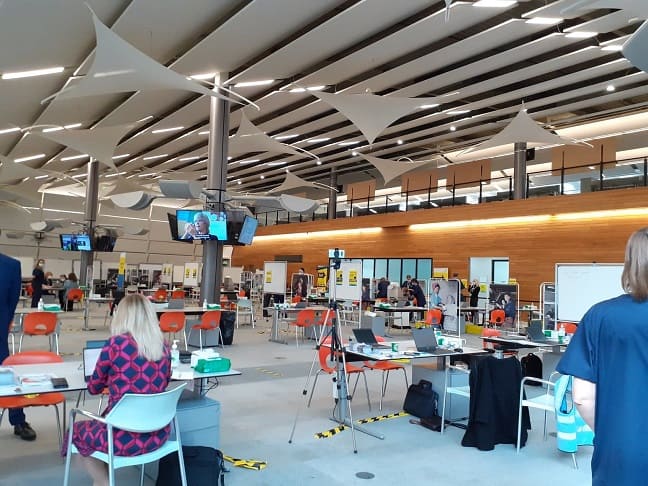 If anyone has already been vaccinated since letters were sent out or would prefer to wait to be invited to attend a hospital or GP service, can simply ignore the letter. People such as care home residents, who are unable to travel to vaccination centres, hospitals or GP-led sites, are already being vaccinated at home. If people have already been given an appointment by their GP service, they should attend that. Patients in cohort six (people with underlying health conditions under 65) are being contacted by their GP.

This week, letters will also be going out to local people, who are aged 64, inviting them to book.

First in the queue

A grandad-of-six, who almost died of Covid, was one of the first people to receive his vaccination at the Thanet centre today.

Richard Denyer, 66, spent a month battling the disease just before Christmas and was given a 20 per cent chance of survival.

But today, he was given the life-saving jab in the county’s fourth vaccination centre with his wife of 46 years, Teresa, who has Alzhiemer’s, by his side.

He said: “This is a devastating disease and I wouldn’t wish it on my worst enemy, I would encourage everyone to have the vaccine. My wife and I ended up in hospital with Covid before Christmas and spent a month there. We had been so careful, but I think we caught it in a shop.

“Teresa became so ill three days later, she couldn’t get out of bed. I called 111 and she ended up in the Queen Elizabeth the Queen Mother Hospital on oxygen.

“I probably should have gone to hospital at the same time, but I thought I would be okay. I ended up in a different hospital ward days later on 85 per cent oxygen. I was told my chances of survival weren’t good.

“I was in hospital with seven other people, I came out in a wheelchair, four others didn’t come out at all. I owe those hospital staff my life. They were wonderful and I can never repay them. I have been waiting for this vaccine ever since and I am so delighted to have it.”

Retired police officer Richard, from Herne Bay, who is still suffering from scarring on his lungs, said: “The thing I’m looking forward to the most is seeing my family and my grandchildren; we have a new five-month-old grandson Oliver, who we have never held.” 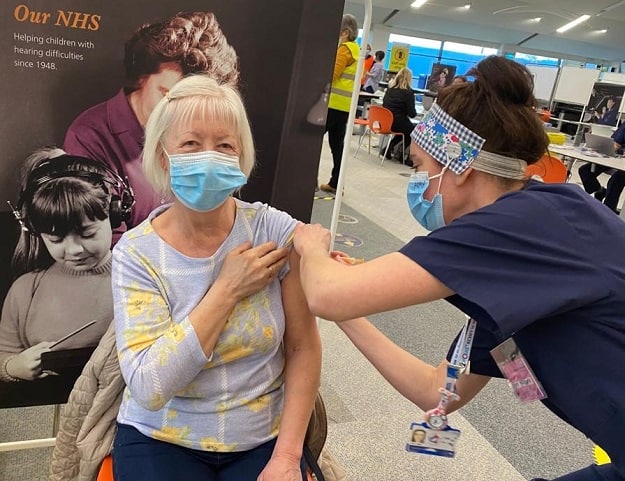 Grandmother-of-five step children Susan Turner was also one of the first people to be vaccinated – she admitted she was a little bit anxious but so pleased once she had had her first jab.

She said: “I am so pleased. I just want to be able to hug my mum, she’s 97 and while we deliver her shopping I’m just missing putting my arms around her and this brings this a step closer – the vaccine gives us all hope. We have been so careful and not seen anyone.” 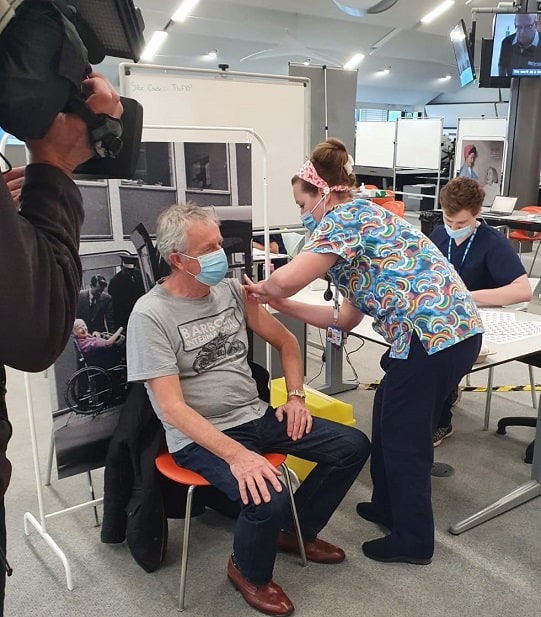 Sixty-seven-year-old Ken Wake was also among the first through the door today, eager to have his jab.

The retired electrician from St Nicholas-at-Wade said: “I am so happy to be here, I would encourage everyone to come along when it’s their turn. I want to protect myself and others.’’

Ken was vaccinated by Nikki Stewart, who also works as a co-ordinator for our children’s therapies services.