A retired advertising photographer and TV commercial director living in Cliftonville turned bird rescuer after what he believes was a woodcock crashed into his second floor office window and fell to the decking below on Saturday (February 6).

Dennis Jackson, 80, says the bird was clearly stunned and so he decided to help as much as he could.

The grandad-of-five, who is involved with SSAFA, Armed Forces charity in Thanet. said: “We found a cardboard box and put him into it with a towel and some newspaper.  We left him for a while and then checked his wings and legs to see if there was any damage which there didn’t seem to be.

“We looked in a bird book and identified him as near as we could tell to a Woodcock, very long beak and plumage similar to a partridge.  Online advice said not to feed him, just to keep warm and quiet so we left him overnight in the box in a quiet room.

“The next morning when we checked he looked more alert so we took the box outside, opened it and gently turned it on its side and after a few minutes he flew away. 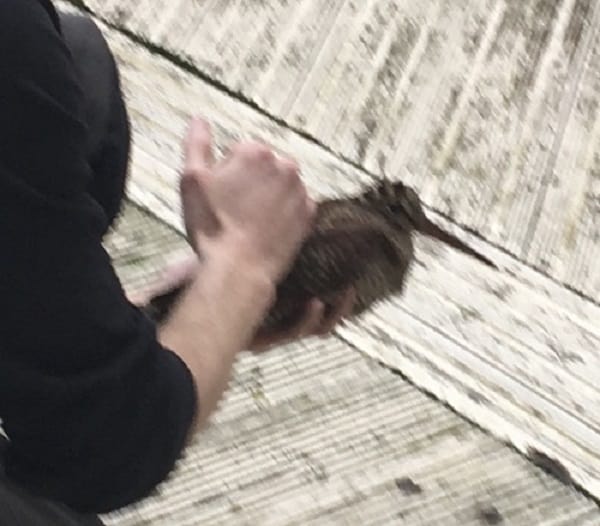 “Yesterday (February 8), I was looking out of my office window and noticed what looked like the same bird poking his long beak into the snow and pulling out and eating a worm every so often.

“I observed him in the garden for about an hour digging for worms until he flew away.  I have lived here for six years and these two occasions are the only times I have ever seen a Woodcock in the garden.  I wonder if it was the same bird?”

The woodcock is a large, bulky wading bird with short legs and a very long straight tapering bill. It is largely nocturnal, spending most of the day in dense cover.

Woodcocks can be found in suitable habitat in summer throughout the UK, except for south-west England. In winter, birds are widespread in lowland areas but people  would be very lucky to see one unless they inadvertently disturb one from its resting place.

A very similar bird is the Snipe which, in winter, can be found round the edges of pools in well-vegetated wetlands.