Phyllis was born in 1915 to parents Emily and Harry Spain. She went to Park Lane School – now Birchington Primary. She left education at the age of 14 and went to work at a grocery store in the village before moving jobs to work at the Post Office in Minnis Bay until the outbreak of World War Two.

She had also worked at a grocery store in Cliftonville, where  she would cycle to work and come home for lunch and then back again in all weathers.

During the conflict Phyllis went to South Wales and worked in a munition’s factory for two years. She came back to Birchington as her mother was in poor health. 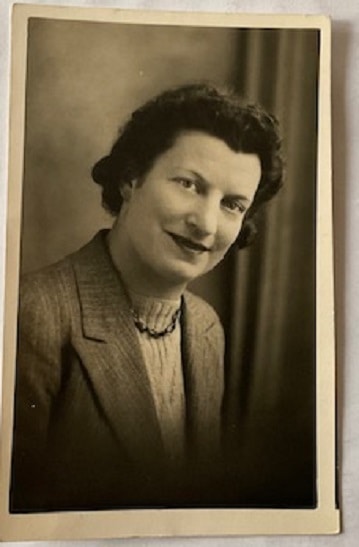 Phyllis liked dancing and met her husband Samuel Dawson at a dance at the Bungalow Hotel. Soldiers were billeted in Birchington at this time.

Phyllis and Samuel were married in April 1946 and went to live in Samuel’s home town Awsworth in Derbyshire. Daughter Shirley was born in 1947. After two years the family returned to Birchington to look after Emily (Phyllis mother) as she was seriously ill.

Emily passed away in 1948 and Phyllis stayed in the village to look after her father Harry.

The family settled in King Edward Road and Samuel found employment as a bus conductor for the East Kent Road Car Company, Phyllis was working at Spencer House, which was a guest house.

Daughter Joanna was born in 1958. Sadly, Samuel suddenly passed away in 1976. Phyllis has never remarried.

Phyllis had three brothers, Norman, Raymond and Eric, who are all sadly deceased now.

Phyllis has worked hard all her life and rode her bicycle everywhere right up until she was 86-years-old.  She lived independently in her flat in Birchington until last year and has recovered successfully from covid.

Daughter Jo and husband Mike said Phyllis is “amazing,” and added: “To achieve this age is no mean feat. She has survived two world wars and two pandemics, and is a remarkable lady.”

At the end of today Mike said: “She has had a fantastic day. She has been really spoilt and she has managed to see her daughter Jo and her granddaughter and great granddaughter, which was brilliant as they haven’t seen each other since September, so that was wonderful for all of them.”

The monarch was King George V and H H Asquith was Prime Minister.

World War One: sinking of the battleship HMS Formidable by an Imperial German Navy U-boat. 35 officers and 512 men are lost

German Zeppelins bomb the towns of Great Yarmouth and King’s Lynn for the first time, killing more than 20 people

Photographs required in British passports for the first time.

Germany regards waters around the British Isles to be a war zone as part of its U-boat campaign.

Royal Navy battleship HMS Dreadnought (1906) sinks German submarine U-29 by ramming her, the only time this tactic is known to have been successfully used by a battleship.

Sinking of the RMS Lusitania: by Imperial German Navy U-boat U-20, killing 1,198 civilians en route from New York to Liverpool.

HMS Princess Irene explodes and sinks while loading mines off Sheerness with the loss of 352 lives.

National Registration Act: All citizens (men and women) aged 15–65 to be registered on 15 August.

Munitions of War Act places munitions factories and their labour relations under control of the Minister of Munitions.

Cecil Chubb acquires Stonehenge at an auction for £6600.

Battle of Loos: British forces take the French town of Loos but with substantial casualties and are unable to press their advantage. This is the first time the British use poison gas in World War I and also the first large-scale use of ‘New’ or Kitchener’s Army units.

Douglas Haig is appointed to succeed John French in command of the British Expeditionary Force.

1915 is also the year when John Buchan’s novel The Thirty-nine Steps. Is published

The World War also means a change in women’s fashion. Women dropped the cumbersome underskirts from their tunic-and-skirt ensembles, simplifying dress and shortening skirts in one step. The Gazette du Bon Ton was showing full skirts with hemlines at calf length. These were called the “war crinoline” by the fashion press, who promoted the style as “patriotic” and “practical”.