Locomotive Storage, which operates a storage and maintenance business for classic railway locomotives and heritage rolling stock, will convert its buildings in Margate to create an impressive British railway heritage museum.

The company bought the former Hornby factory and warehouse site in February 2017 and already stores rolling stock at the property which sits alongside Hornby’s offices, showrooms and visitor centre.

In 2018, The Isle of Thanet News revealed the imminent arrival of the classic Gresley Class A4 Pacific locomotive, Bittern and the plans for the One:One collection and museum. Permission for the alterations to make the museum a reality was granted by Thanet council last Monday (January 25).

The main area had already been converted with seven railway tracks laid in the warehouse and access loading docks to facilitate the unloading and loading of locomotives and carriages. It was planned to hold up to 30 items of rolling stock. 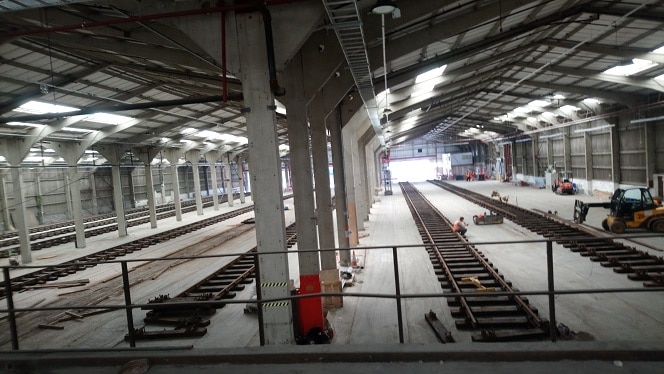 At that time South Thanet MP Craig Mackinlay said it could be: “one of the most significant locomotive museums in the world.”

Director Frank Martin said: “When looking for a space big enough to house these historic icons, we were thrilled to have the chance to put them on the site that has been home to Hornby since the 1950s. So, since 2018, The One:One Collection has been taking shape in some of Hornby’s original warehouses.

“But the story doesn’t stop with rail. Thanks to the immense strength of the warehouse structure, we’re able to reconfigure a mezzanine floor to house other icons of transport and engineering history. So our 1:1 scale trains will be joined by cars, buses and even some large scale railway models.

“When we’re able to fully open The One:One Collection Museum to the public, instead of a static collection, you’ll find a changing set of exhibits, giving you the chance to encounter different parts of our fascinating rail history at each visit.

“We’ll also have large-scale, hand-built models and many other pieces of rail memorabilia. Once the planned One:One Collection Museum is complete, you’ll go from small scale to real-life, viewing models from 00 gauge right up to the real thing.

“Special exhibits telling the stories of our remarkable locomotives, their origins, and the role that rail has played in our nation’s history will put these feats of engineering into context.”

Locomotive Storage will make structural changes at the site to create the museum but retain the industrial appearance of the property. This involves splitting the old warehouse into a series of spaces that flow through a main exhibition space at mezzanine level where visitors are free to roam freely, and then the main hall at ground floor that is used for the storage of the historic locomotives where visitors would be taken in organised groups from the mezzanine.

There will be a café, additional working space and exhibition space at lower ground floor level that would be ancillary to the museum use.

Car parking will be provided in the rear of the factory building which is currently unused and vacant, with a total of 99 spaces – 93 of these spaces will serve the museum and another 5 are displaced spaces for the visitor centre. There would be an additional 15 spaces for motorbikes. This parking will be accessed from Channel Road.

The development would operate 7 days a week between the hours of 10am and 4pm. It would employ approximately 14 members of staff, meaning seven new roles in addition to the seven staff currently employed there. A member of security staff would be on site at all times.

Planning documents submitted for the museum state: “The proposed development has a very specific historic association to the site as it has been formerly used by Hornby as their warehousing facility and more recently for the storage of historic locomotives.

“Hornby is a British model railway brand with roots that date back to 1901 with a long established relationship with the Margate factories. There is already a Hornby Visitor Centre for the display of Hornby model trains within building H1. The museum therefore has a very strong historic connection to this specific site and the museum relates positively to the existing Hornby operation and shows off the best of British rail whilst celebrating the sites heritage and historic function.

“The museum would create seven new jobs through the need for permanent and part time staff to work in the museum (total 14 full-time jobs). This employment level could also increase in future. Furthermore, the proposed use would also boost the tourist economy by encouraging people to visit and spend in the area.”

Locomotives already stored at the site include Bittern, Black 5 loco, the only surviving 4732 designated 4-SUB ( Sub standing for Suburban), the Mersey Rail Class 503 Electric Multiple Unit (EMU) and  one coach from a preserved 4 EPB unit 5176 in BR blue.

Find out more about the collection at http://www.theonetoonecollection.co.uk/