The classic Gresley Class A4 Pacific locomotive, Bittern, is now ready to leave Crewe for its journey to Margate by road.

Bittern will arrive at Locomotive Storage Ltd at the former Hornby factory site on June 2, possibly in the early hours according to locomotive enthusiasts, for storage and eventual public display.

Bittern is a sister locomotive to the world steam record holding “Mallard” and will be housed at the newly prepared facility in Margate operated by Locomotive Storage Ltd.

Locomotive Storage operates a storage and maintenance business for classic railway locomotives and heritage rolling stock. The Margate site could become “one of the most significant locomotive museums in the world ,” according to South Thanet MP Craig Mackinlay who recently toured the site.

The main warehouse has been converted with seven railway tracks laid in the warehouse and access loading docks to facilitate the unloading and loading of locomotives and carriages. It is expected that up to 30 items of rolling stock will eventually be housed there. 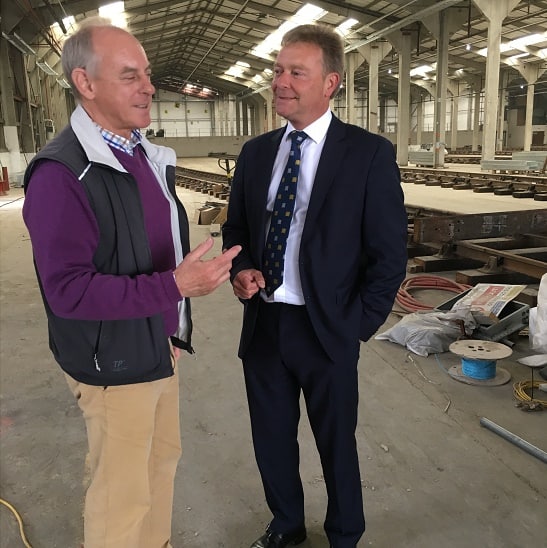 Mr Mackinlay (pictured with Locomotive Storage director Frank Martin) visited the site, which will be kept as a venue for ‘resting’ assets which can be brought up to display standard, ahead of Bittern’s arrival.

He said: “The size and scope of what is planned by a new philanthropic investor, Jeremy Hosking, who collects what can only be described as the biggest ‘boys toys’ in the world, left me astounded.

“Over the next few weeks we will have, on our doorstep in Thanet, the start of one of the most significant locomotive museums in the world as part of his collection within some of the warehousing that was once at the heart of the Hornby company’s operations.

“This is going to be a world class museum. Fantastic!”

Bittern weighs 102 tonnes and its tender weighs 30 tonnes unladen (before coal and water). They will travel from Crewe on a convoy of low-loaders.

It will join the Mersey Rail Class 503 Electric Multiple Unit (pictured above) which arrived at the site yesterday (May 30).

Locomotive Storage Limited is working closely with Hornby, whose Visitor Centre continues to occupy part of the Margate site.