An 18-year-old from Ramsgate says business is growing at an ‘unusual’ rate after setting up his own building firm during the pandemic.

The enterprising teen then put his details on the MyBuilder.com website and says work has been steadily increasing, growing from just himself and a friend to becoming an employer with increasing manpower, machinery and larger scale jobs.

Jacob, who says he did well in his GCSEs despite being ‘put on gardening leave,’ began in the trade strauight out of school.

He said: “I got a job with my dad’s friend as a labourer and I was taken by it on my first day. I love every aspect of the industry, from the enjoyment I take from the work itself down to the atmosphere and the laughs we have.

“I decided to study electrical installation at Broadstairs college, I was a very quick learner and started working for an electrician friend of mine called Edvin. The college sent me to Canterbury for an electrical installation competition where the best from each college in the southeast compete in trade competitions. I won it by miles but then missed the coach to the semi finals!

“I gave it up about a month after I missed the coach as it had put me off so much. So I put myself on MyBuilder.com to find the odd little job here and there for a bit of extra money and started taking on small jobs like painting one wall and digging a trench.

“As time went on the jobs turned from me and a friend or me alone doing little bits and bobs to much bigger things. We are on a £10,000 project now with about £8000 more work to come when we’ve finished, from the same customer. We’ve just come off an extension in Ramsgate and we’re looking to start a big one on an old house in Canterbury in the next couple of months.

“We’re scaling up at a very unusual rate, growing in manpower, tools, machinery and vehicles. Our jobs keep getting bigger and more frequent.

“ I hope to follow in the footsteps of Mark Quinn of Quinn Estates and to one day have a company the size of his.”

Despite being busy Jacob took time out last week to help horse owners whose animals are stabled on land owned by Minster Abbey.

The car parking area for the stables had become muddy and hard to navigate for drivers. A friend mentioned it to Jacob and so he decided to help by donating and delivering 10 tonnes of shingle. 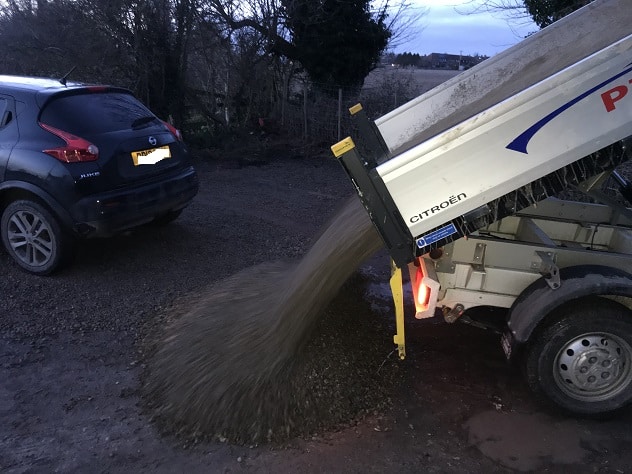 He said: “The car park was a muddy mess and people couldn’t go and feed their animals because they got there and would be skating around on the mud.

“I thought I would help so we took the shingle and the tipper over and made it right for them.”