A fantastic light installation can be seen on Margate’s former Primark building for a project based on 1990’s rave culture.

The former British Home Store building, which dates from the 1930s and has Art Deco influences, is the backdrop of Shaun PRICKIMAGE and The Margate School’s latest collaborative project, MargatePLUR.

Backlit full-sized cut out letters reading PEACE LOVE UNITY RESPECT in an art deco based font can be seen across the whole Main Sands beach from the tidal pool to the harbour arm, every night until the end of the month.

Viewers can also listen to samples of many voices saying PEACE LOVE UNITY RESPECT as they walk across Margate.

Peace Love Unity Respect, commonly shortened to PLUR, is associated with rave culture. It has been used since the early 1990s when it became commonplace on nightclub and rave flyers and especially on club paraphernalia advertising underground outdoor trance music parties.

The project organisers say that after an incredibly stressful year for Margate and globally, it felt like the right time to remember simpler things and have a positive outlook on life.

The project is inspired by the aesthetic of the rave and acid house community that recently celebrated its 30 year anniversary.

The former BHS/Primark building windows overlooking the Main Sands, were chosen as the canvas to spark contemplation and mindfulness. The project has been running since last month. 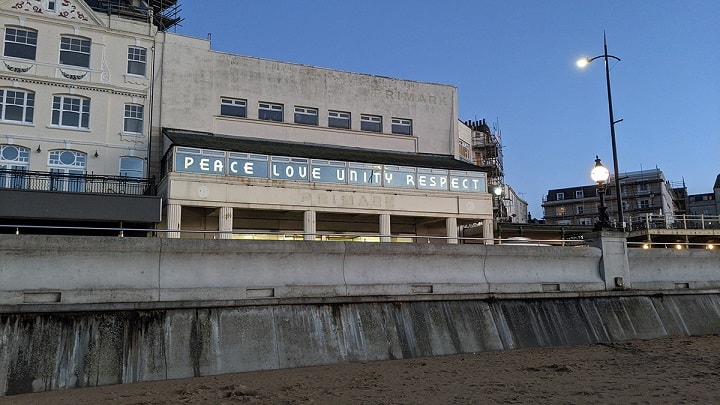 Shaun PRICKIMAGE specialises in digital visuals for festivals, events and brands. Graduating in 2005 in BA Digital Media, he quickly started VJ residencies at Fabric Club and Club NME at Koko plus many other innovative underground London club nights. He is currently living in Margate and working from Resort Studios.

The Margate School (TMS) is an independent non profit liberal art school. In 2019 TMS took on the derelict former Woolworths building that had stood empty since 2008. The School’s open door policy, public events and outreach work is aimed to reinvent the High Street and help alleviate the social pressures that come with deprivation

With thanks to Ayaan Whoa @dontagejustglow and Ricky Cox @thewonkydonkey