A son has spoken of his distress and shock after he and his siblings were told by medical staff that their mum was dying from covid and a do not resuscitate order was placed on her file against their wishes – only for her to sit up and ask for a cup of tea after weeks of being treated as ‘end of life.’

Terry Bolton, from Birchington, says nan-of-three Carol was admitted to QEQM Hospital in Margate on December 3 due to being poorly and suffering confusion.

X-rays showed that Westgate resident Carol, 82, had pneumonia. She was admitted to acute medical unit 2, which is where her family believe she contracted covid. Carol was tested on December 7 with a positive result confirmed on December 10. This means it is also possible the virus was contracted in the community.

Carol was later transferred to Deal Ward and this is when the family say the situation became very distressing.

Construction worker Terry, 47, said: “She had various medication and oxygen but then after six days we got a phone call saying mum wasn’t responding to covid treatment. They said she was incoherent. I asked to talk to her on the phone and had a full five minute conversation with her.

“We were then told that the consultant had reviewed things and mum wasn’t responding so they were going to take her off the medication and go to end of life care.

After Terry and his siblings Kim and Paul raised concerns with the hospital and asked Sir Roger Gale to intervene, a meeting was arranged to discuss Carol’s care.

But after Christmas, Carol was again taken off covid treatment.

Terry said: “We got another phone call and the nurse said mum had deteriorated very badly. She said they were allowing visits because it was end of life. My brother was visiting and he said they told him mum’s body and organs were breaking down and she was dying.

“It was all such a shock, they were ending mum’s life without our consent.” 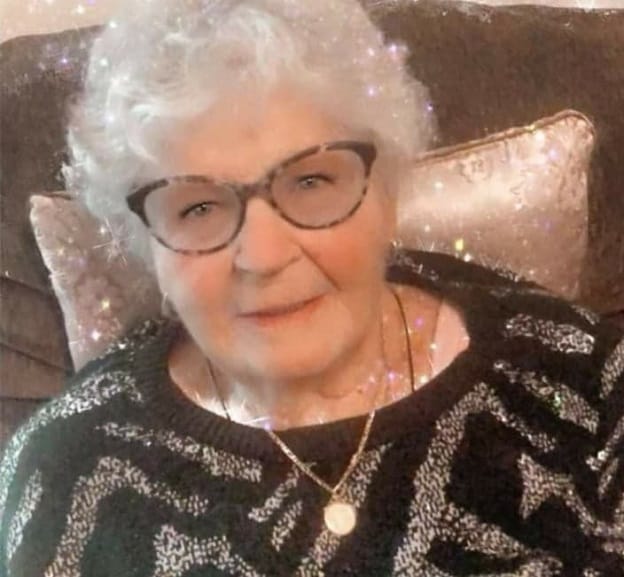 But on January 6 Carol, who worked for the NHS for 27 years including as an appointment and medical records manager at QEQM, defied all the end of life predictions by sitting up, asking for a cup of tea and saying she wanted to go home.

Terry said: “One day we are being told mum had been written off and the next she is asking for a cup of tea and they said she would be going to Canterbury hospital for rehabilitation, which is because she has been in bed and full of drugs for a month.

“We are all so pleased for mum, but I can’t feel the emotion after being pulled from pillar to post all these weeks.

“I feel as though if people are old they are pushed to one side but my mum is very strong and she got over the covid.”

Carol is currently at the Kent & Canterbury Hospital. The great-nan of three, who loves reading, gardening and fashion, has been weaned off oxygen and is now eating small amounts.

Terry, who says his mum ‘sees the niceness in everyone,’ said Carol is also now getting out of bed and being encouraged to exercise. He has praised the care she is now receiving.

He added: “Mum has never stepped out of line in her whole life. Her life, like all our family, has been work, pay the bills, raise children.”

Terry said he and his siblings have lodged a complaint via PALS (Patient Advice and Liaison Service) but he is now also planning to take legal action.

He said: “I was knocked back when I was told about the do not resuscitate order, it should be a family decision. I think it is important to do something. We are lucky that mum is here but sadly lots of people aren’t here anymore. I want to make sure people are aware of what is going on with their loved ones.

“I want to know why they decided mum was end of life, why a consultant could play God with her life. Taking legal action is not about money, I don’t want money, I want to see people punished and make sure things change.”

A spokesperson for East Kent Hospitals said: “We have been in contact with Ms Bolton’s family about their concerns and we fully understand how difficult and upsetting this time has been for them.

“In situations where a person’s clinical condition is deteriorating despite medical treatment, it is not always appropriate to attempt resuscitation if their heart or breathing stops because the outcome of any attempt at resuscitation would not be successful at that time.

“A decision not to attempt to resuscitation is never taken lightly and discussions and support are offered to patients and their families where possible to ensure all questions and other issues can be addressed sensitively and honestly.

Use of do not attempt to resuscitate process

A court judgement in 2014 over the process of DNAR (do not attempt resuscitation) use in hospitals in relation to cardiopulmonary resuscitation found in summary, a duty; that staff must consult patients in relation to DNACPR decisions, unless the clinician believes that the distress that will be caused by the discussion will harm the patient.

In the circumstances when staff avoid the consultation because they believe that harm will be caused, they must document their reasons for this belief. If the patient lacks capacity, they must take reasonable steps to involve the patient’s family in the discussions that lead to a decision as to whether or not it is appropriate to attempt cardiopulmonary resuscitation.

An East Kent Hospitals’ document says: “When someone is coming to the end of their life as a result of an advanced, irreversible illness, and the heart and breathing stop as part of the natural process of dying, CPR will not prevent their death.

“If CPR does restart the heart and breathing in these circumstances it can leave a dying person with more distress or worse health in the last hours or days of their life. For others, receiving CPR would deprive them of dignity during the very last moments of their life.

“A decision not to attempt CPR is often called a ‘Do Not Attempt CPR’ or ‘DNACPR’ decision. Many healthcare teams will try to discuss with individual people their wishes about CPR and to record when CPR would still be wanted, as well as when it is not wanted or would not work.”

However, the law does not require a patient or their family to consent to a DNAR order. This means a doctor can issue an order, even if the family do not want one, if medical evidence necessitates.

The law instead limits the use of DNRs to certain circumstances, and gives patients a right to be involved in the decision making process. Courts will not compel any doctor to give treatment that the doctor reasonably considers not to be in his or her patient’s best interests and recognises the distress such decisions will have on the staff having to make them.