An aviation historian from Hungary is hoping Thanet people can help with his research  on a young Ramsgate man who died when his squadron plane was shot down in 1944.

Since 1997 Gabor Nagy has been researching an incident which took place on the night of  July 3-4 in 1944 when a Handley Page Halifax was shot down and crashed at the small Hungarian village of Mezőcsokonya.

The plane was part of a secret mission. All eight crewmembers lost their lives.

Gabor has interviewed witnesses, recorded their memories and researched the background to the incident. He has written the full story for the Annual Book 2020 of the Rippl Ronai Museum Kaposvár, Hungary, and steps are being taken to construct a memorial at the crash site.

He now wants to write the tale in English but also wants to find out about more of the crew. One of those crew members was Flt/Sgt. Ronald Radford from Ramsgate and Gabor hopes locals might help him find out more and possibly discover photos. 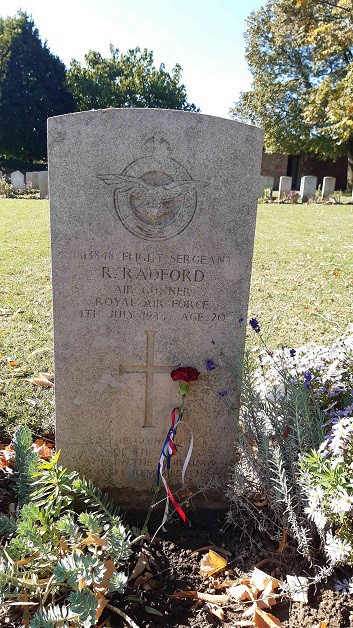 So far he knows that  Flt/Sgt. Ronald Radford, laid to rest at Budapest War Cemetery, was the son of Albert Edward and Dora Ellen Radford of Newington, Ramsgate. Ronald was born in 1924 and was just 20 when he died.

After an appeal on the We Love Ramsgate facebook group, members posted to say  he lived in Ramsgate in 1939 according to the census and his parents’ last address was in Margate. His dad died in 1962 and his mum in 1967.

Gabor said: “In the last 23 years I revealed the full story of that fateful night. I found and interviewed many eyewitnesses, I recorded their memories, I researched the background story.

“I and a friend of mine found the crash site, excavated hundreds of wreckage parts which “told” us the last seconds of the plane.

“ I was in contact with the wireless operator Arthur Archer Lee’s brother in 2010. Since then, I lost the contact. I am in contact the pilot, Surry Philip Victor Bird’s daughter, Penelope. I and my wife (when we lived in England) visited her in London in May 2017, and she visited the crash site in October 2019.

“Six British, one Canadian and one French airman lost their lives on that night. Myself and my friend  Hubert Warsmann, who lives in Hungary, had an idea about a memorial to the airmen to be erected in the small village.

“Hubert made contact with the three embassies and the French Ambassador was interested in it. They organised a conference in the French Institute in Budapest in October 2019.

“I delivered a long presentation about my research of the JP286. The idea of the memorial was accepted and it is on the right path. Of course, the mayor of the small village supports it.

“I am going to write the story and publish it in a British Aviation Magazine. Sadly, I have information about only four crewmembers: SPV Bird, A.A. Lee, D.D.C. Stewart and Peter Lake.

“I would like to get information and photos of the other airmen. I would like to make contact with their relative, because I would like to share with them the story of that and it would be great if they could attend the inaugurate ceremony of the memorial.

“And of course, I would like to see a photo of the other crewmembers. It is very important to me: as a man and as an aviation historian.”

Anyone with information can email Gabor at nagygabor42@hotmail.com  or  gabornagy42@gmail.com

Some details of the incident can be found in an account written by Terry Maker at http://aircrewremembered.com/bird-surray.html