A mobile Covid-19 test station has been set up by the Minster roundabout, Acol direction. in a bid to help clear the huge queues of HGV drivers trying to leave the UK.

The French border was initially closed to UK passengers and accompanied freight on Sunday night with the French government voicing concerns over the virulent new strain of covid spreading in parts of England.

An agreement to reopen the UK-French border to allow accompanied freight services and some passenger services to resume between the two countries was reached but all people travelling from the UK into France required to show proof of a negative Coronavirus test taken within the previous 72 hours. 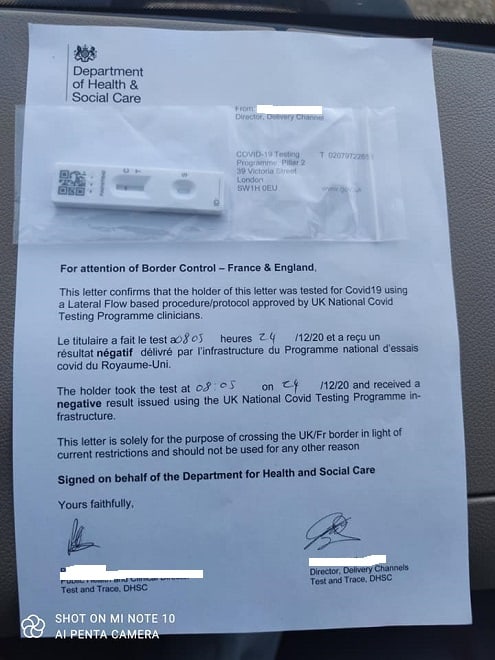 It means HGV drivers parked up at Manston airport and on routes to Dover can continue their journey if their test proves negative. Drivers with a positive test will have to isolate in hotel accommodation.

All lorry drivers, irrespective of nationality, require a lateral flow test. This can detect the new strain of COVID-19 and provide results in around 30-40 minutes, rather than the 24 hours required after a PCR test.

Testing has been taking place at Manston and on the M20 but despite some lorries being released to travel, there is still chaos on surrounding roads. It is understood only a very small number of vehicles have actually left the country.

The Sandwich Bypass is filled with lorries. One lane on the A299 is blocked due to lorries parked because they couldn’t get into Manston airfield. This is Eastbound from A28 Canterbury Road (St Nicholas At Wade Roundabout) to B2190 Minster Road (Minster Roundabout).

One lane on the A299 at the Hengist Way is also blocked due to lorries being released from the Manston airfield holding area, Eastbound between B2190 Minster Road (Minster Roundabout) and Canterbury Road West (Cliffsend roundabout).

All drivers – including all hauliers – are being reminded by Highways England to avoid travelling to Kent until further notice due to continued cross-channel disruption.

Due to the severity of the disruption, and the continued arrival of freight traffic into Kent, Kent Police have activated Operation Stack to manage freight traffic, with both the coastbound and London-bound M20 now being used to stack lorries until disruption eases. This means that the M20 is effectively closed in both directions between junctions 8 for Maidstone East and junction 9 for Ashford, with diversions via the A20.

Freight is also being stacked between junctions 8 and 11 on the coastbound M20.

Highways England say: “The measures follow the French government’s closure of the border on Sunday evening, and the subsequent disruption to channel crossings. Even though the border is now open, it will take some time to clear the backlog of freight traffic wishing to cross the channel.

“Highways England is working closely with the Department for Transport, Kent Resilience Forum, Kent Council and Kent Police on contingency measures to alleviate the congestion.”

P&O has confirmed ferry crossing will continue to take place over Christmas to help clear the backlog.

Some 170 military personnel, including from 36 Engineer Regiment and 1 Irish Guards, are assisting with testing and  a team of French firefighters have arrived in Dover with 10,000 coronavirus tests for drivers.

However, reports from truckers at the holding site in Manston say tests ran out last night and more needed to be sent, although this has not yet been confirmed.

Can I just say as I’ve been at manston from the outset supplying catering for the drivers, we were the first their! And…

Facilities are being provided with assistance from the Thanet community. It is likely many of the thousands of hauliers in Kent trying to cross into France will still be in the county on Christmas Day.

A social media post from Thanet council says: “Charities and organisations in Kent are working together to coordinate food deliveries to drivers who have been caught in the disruption caused by the earlier closure of the French border. We are grateful for all of the offers of practical support from within the Thanet community. If you have donations of food we encourage you to either consider our local food banks to help support the local communities or contact Kent Together on 03000 41 92 92.

“We are continuing to monitor the situation closely and are involved (along with other key partners) in regular Tactical and Strategic Command meetings led by the Police.”

The waste and recycling service is currently operating as scheduled today following the traffic disruption yesterday. If any bins are missed we will aim to collect them on the next scheduled collection, which will be Monday, December 28.

Collections will not take place on Christmas Day (Friday 25 December).