Operation Stack has been implemented on the coastbound carriageway of the M20 between Junctions 8 and 11 and Manston airport is being prepared to accommodate queueing HGVs.

It has been put in place as a contingency measure following the French government’s announcement it will not accept any passengers arriving from the UK for the next 48 hours, and the subsequent closures of the Port of Dover and Channel Tunnel.

The Department for Transport is preparing Manston ready to support the Kent Resilience Forum’s plans to manage disruption. Manston can accommodate up to 4,000 lorries, though the message to hauliers is to avoid travelling to Kent until further notice.

We are currently preparing Manston ready to support Kent Resilience Forum’s plans to manage disruption in #Kent today. This can accommodate up to 4,000 lorries. However our message to #Hauliers is to avoid travelling to Kent until further notice. pic.twitter.com/uXXt4nMCHQ

Major concerns have been raised about the impact on Thanet of the EU exit lorry park provision at the Manston airport site.

A special development order allows use of the site as part of the Kent-wide Operation Fennel to hold up to 4,000 HGVs to help cope with possible post EU exit jams at the Port of Dover.

Under the Operation Fennel plan, the A299, Manston and the A256 would be used to manage lorries heading for the Port of Dover if congestion builds up on the M20. This is as a result of the new border controls due to come in force at 11pm on 31 December 2020.

Issues raised at a council meeting last month included fears for the risk to lives because of a potential blocking of the road network to QEQM Hospital and to routes for Ashford hospital and the overwhelming of health services if a Covid outbreak occurred at the lorry park which can hold up to 4000 HGVs – equating to a possible 8,000 drivers.

Fears that a fire incident could spread out of control were also aired by Cllr Paul Moore.

The department stated: “Following the French Government’s announcement it will not accept any passengers arriving from the UK for the next 48 hours we’re asking the public and particularly hauliers not to travel to Kent ports or other routes to France.

The government said that while it is expecting severe disruption in Kent, other ports facing France will also be impacted. As a result, it has immediately asked all hauliers to avoid all roll-on-roll-off routes to France, including Kent ports.

A Government spokesperson said:  “We are expecting significant disruption in Kent following the announcement by the French Government that, from 11pm on Sunday, December 20, it will not accept any passengers from the UK for the next 48 hours.

“As a result we are urging everybody – including all hauliers – to avoid travelling to Kent ports until further notice.

“We are working closely with Kent Resilience Forum, Kent Council, Kent Police and Highways England to ensure contingency measures are urgently put in place to manage disruption, and the Prime Minister will chair a COBR meeting tomorrow to discuss the situation.” 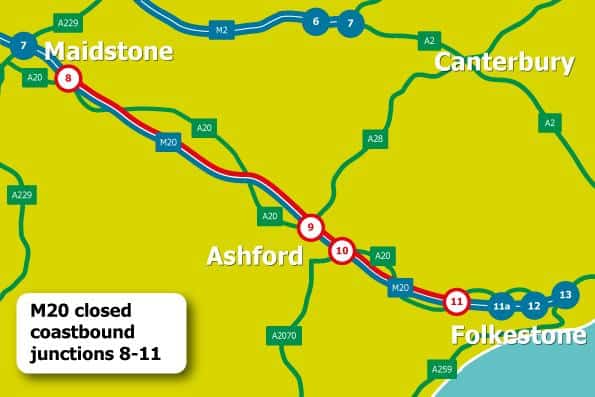 Hauliers and their customers should delay shipments or seek other routes – unaccompanied freight to France and roll-on-roll-off services to other EU countries are not affected. The government has also said it will work hard to support those businesses impacted.

Talks are currently underway to find a solution and enable the travel ban to be lifted.

What is Operation Stack?

Operation Stack is where parts of the M20 are used to queue lorries travelling towards the continent, to avoid causing gridlock across Kent’s road network.

It is only introduced as an emergency measure after consultation with other agencies and implemented following a thorough assessment of issues, including safety concerns and disruption on the road network. 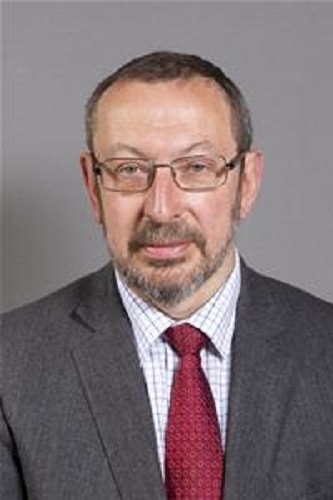 Lib Dem group leader at Kent County Council, Rob Bird, said: “For the past 6 months Kent’s Liberal Democrats have been calling for Covid tests for all drivers arriving in Kent from Europe, or better still, before they depart.  Our calls were dismissed.

“Ironically, there is now a strong likelihood that the French and Belgian authorities will insist on drivers being tested for Covid before they travel to Europe. The Government is under acute pressure to set up rapid testing units for drivers heading to Dover and the Channel Tunnel. All within the next 24 hours.

“None of this is straightforward.  Operating procedures take more than a few hours to establish. The local Public Health teams will need to agree protocols with their Belgian and French counterparts for the interpretation of test results. And arrangements will need to be put in place to provide secure accommodation for any driver testing positive.

“The Government could have done this before now for both inbound and outbound drivers. Instead, we find ourselves in another fine mess.”

How does it work?

The diversion is A20 from Hollingbourne to Ashford, then follow ‘S’ on road signs along Templar Way and Chart Road, Brookfield Road, Beaver Lane, Kingsnorth Road, Norman Road, A2042 Romney Marsh Road, A2070 Bad Munstereifel Road, A2070 Link Road to M20 J10A, then A20 through Sellindge to M20 J11.

Why are more sections of the motorway closed in the early stages of Operation Stack?
When Operation Stack is first implemented there will be a significant queue of freight traffic which sometimes merges from the port to traffic for the Channel Tunnel.

In order to safely manage the freight traffic and place the operation on, there may be a need to close other slip roads leading to the port and the tunnel for a period of time.

Additional information for freight:
If you are carrying ‘quick to market’ goods, drivers are to present themselves to the police with a CMR note (proof of contract) as they join the back of Operation Stack.

Check with your operator
Contact your travel operator before setting off on your journey. Here are a few useful numbers:
Eurotunnel – call 08444 630000.
Eurostar – visit www.eurostar.com
The Port of Dover – call 01304 240 400 or visit www.doverport.co.uk