A crowdfunder has been launched by community group GRASS to raise funds for initial renovation work to Cliftonville’s Oval Bandstand and Lawns.

The newly formed CIC (Community Interest Company) is in the process of taking on the freehold from Thanet council after hearing in August their bid via community asset transfer had been successful.

The authority had invited groups to takeover the landmark site on Queen’s Promenade after it was placed on the asset disposal list.  Now, after hosting a series of popular events such as the Cliftonville Games and Open Air Cinema, GRASS plans to restore the site back to its former glory.

It is hoped the crowdfunder will raise £20,000 to help pay for legal fees and  urgent infrastructure work to make the site safe which includes upgrading the electrics in the kiosk, installing CCTV, and repainting the bandstand to protect it from the elements.

In a statement they said: “We are really keen to reopen the kiosk and the toilets for the 2021 summer season so that walkers, cyclists, and bathers at Walpole Bay have access to these essential facilities.

“The kiosk will be used as a community café, selling a range of light refreshments to all the people that frequent the area. All profits will be reinvested to help support The Oval site, as the whole operation will be run as a nonprofit, social enterprise business.

“With your donations we hope to complete the freehold transfer of the site by the end of March 2021, so that we can start the urgent improvement works and get the site up and running for the community.”

Using the Oval as a hub for community entertainment, and engagement, is key to the GRASS Cliftonville vision. Some of the events that could be brought to the Oval include tea dances, Christmas markets, health and wellbeing classes and  outdoor theatre. Bringing back live music to the bandstand, with an emphasis on local bands from Margate’s vibrant music scene, is key to their plans.

The Oval – A 130 Years of Seaside History

Thanks to Suzannah Foad of Margate Local & Family History

For more than a century Cliftonville’s Oval Bandstand and Lawns has enjoyed all the beloved eccentricities of British seaside culture.

The iconic swathe of coastline has staged Royal visits, revered musicians and famed comedians while model villages and grazing donkeys have all once resided here.

Previously owned by school headmaster Charles Schimmellmann the land was sold to Jacob Lewis in 1890. In 1897 a temporary bandstand was replaced with an ornate wrought-iron structure complete with landscaped amphitheatre which was surrounded by 2,000 deckchairs for music lovers

Keeping the surrounding grass area pristine for Cliftonville High Society was donkey-keeper Benjamin Baker who use the area to graze his animals.

For the next 30 years, The Oval was the centre of Cliftonville entertainment. In 1926, improvements were made and an impressive opening ceremony was staged when the Prince of Wales, later the Duke of Windsor, opened the Prince’s Walk promenade. 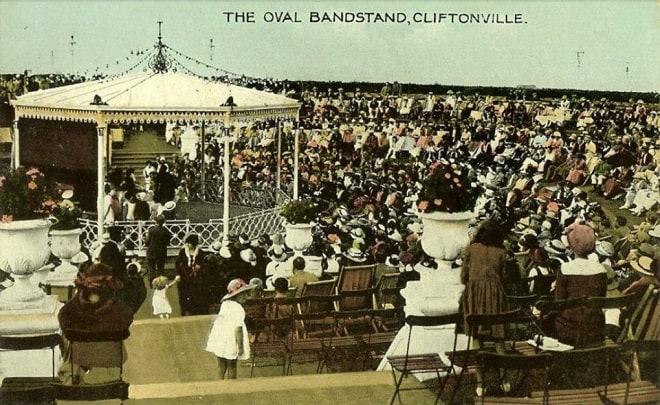 Between the wars, many vocalists and comedians who played at The Oval, went on to fame and fortune. The Oval included a number of local musicians over the years. Pianists included Alex Inman in 1959 and, trombonist Jackie Wright in 1960 – who later found fame in The Benny Hill Show. Vocalists Carole Hayes and Dennis Stewart also appeared in the 1950s.

In the late 1960s and ’70s staged all-in wrestling with the likes of wrestlers Pat Roach and Big Daddy. In the 1970s there was also a model village which tourists flocked to for a chance to see miniature Margate buildings which included a Dreamland replica made by Thanet councillor Mick Tomlinson.

Work began on the models, which were scaled 1 inch to 1 foot, in 1968 and on-site in 1970. It was opened in April 1971 by the Duke and Duchess of Bedford, with a second stage due for completion the same year.

More than 5,000 plants were bedded in and there was even a miniature railway and illuminations at dusk. The village was located where Queen’s Court residential home is now situated.

Organist Tony Savage often played at the bandstand and is widely remembered by the community. Cliftonville Residents Association raised funds to replace the original bandstand after it fell into serious disrepair and have held successful farmers’ markets for more than a decade.

To donate visit the crowdfunding page.