A private view marks a new exhibition tonight (December 11) at The Rhodes Gallery in Margate.

Margate Uprising, which runs until the end of January, is the work of artist Phien O’Phien.

Also a singer and a poet, Phien, 50, comes from a family of Pavee people and he and his five siblings spent much time in Medway, Swale, Canterbury and Thanet, with particular childhood memories of Dreamland.

The self-taught father-of-four has now incorporated Dreamland into his work by using boards from amusement park which had been discarded during renovation before the 2015 reopening. 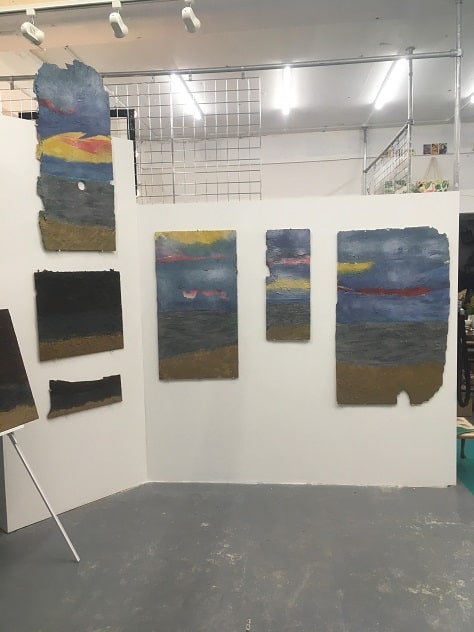 Phien also used sand from the beach for his pieces. The works are a colourful celebration of the town and a chance to own a piece of Margate itself!

Phien has previously exhibited at Tate Modern and, more recently, at The Margate School, with art delving into the issues of those who are disenfranchised, He says he is not an artist but a person ‘with ideas who opens up debate and consideration.’

He has lived in Margate for around five years and says he believes the town is on the up and much of that is due to the arts and people moving into the area.

He said: “Margate has been rescued by the arts. Yes, with that comes the artists and the gentrification, but are you happy living in place that’s seen better days or happy to live somewhere that is being pulled up.

“I think the arts have done a good deal for Margate and Thanet and I think that will continue.”

And Phien believes art is for the many, saying: “Art is something everyone can get involved in. Everyone has a picture in them.”

The private views are tonight and tomorrow from 5pm to 9pm.

The Rhodes Gallery is in The Centre, Margate.