A Tree Replacement Notice has been served on Parkstairs Ltd over the removal of trees from land in Broadstairs.

Thanet council carried out an investigation following complaints that landowner Parkstairs had felled more than 40 trees and closed off a public footpath at woodland off Park Avenue in February.

Parkstairs Ltd said a survey had “identified a number of dead and dying trees which are in a dangerous condition, some of this is due to heavy ivy growth strangling the trees.

“There is also historic storm damage which has been worsened by the recent extreme weather.  In addition, there are numerous potential trips and falls across the land and a real danger to the public of falls from height due to damaged branches”.

Members of the Park Avenue Woodland Group delivered a petition to Thanet council in July requesting the trees be replanted. 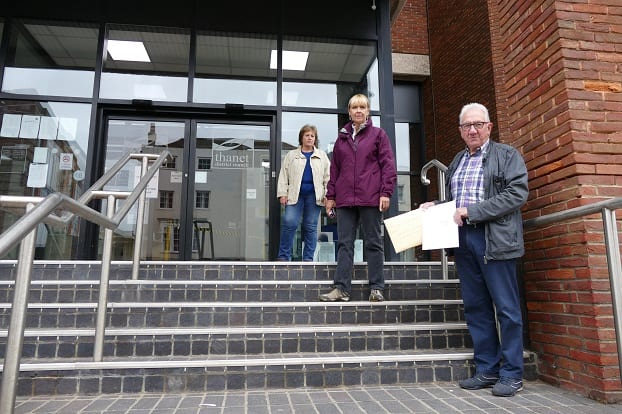 Thanet council has now concluded an investigation and ordered Parkstairs to replant 12 trees at the site.

Twelve trees of those removed were considered to be protected by Area Tree Preservation Orders from 1956 and 1985 which cover the site. This means 12 trees of specific species are to be replanted on the site by March 31,  2021. Only the trees present on the site when the orders were made (and any replacements subsequently planted) can be required to be replanted by the council. Those trees that are self seeded are not covered by the Area Tree Protection Order.

The council has also issued a written warning following the work to a Mountain Ash tree at at Thanet Indoor Bowls Club in October.

Following notification from the public, planned removal works were halted and the tree was assessed by the council’s Horticultural and Biodiversity officer. The tree is expected to regrow and will be monitored over the coming months.

The work prompted protest from members of Thanet Trees group and residents in the area. Some 60 protesters held up banners and signs outside Thanet Indoor Bowls Centre on Eastern Esplanade demanding enforcement was carried out for the cutting back of the mature tree at the site.

In November Thanet District Council applied to the DEFRA green recovery fund in collaboration with Trees for Cities for £46k to run three community tree planting days in Ramsgate with around 30 mature trees for each event and to employ a dedicated part time open spaces officer for the duration of the 16 month project. The outcome is expected shortly.

The Climate Change Officer is also working with Earthwatch with the aim of creating a “Tiny forest” in Thanet; a woodland the size of a football pitch as seen on Countryfile last weekend.   Further details will be shared once funding has been received to ensure this is a community led initiative.

As part of the council’s future biodiversity strategy, a bee plan is being prepared by the Open Spaces team with the assistance of the Bumblebee Trust. A proportion  of open spaces land will be managed for pollinators, including creating semi natural habitats with a high percentage of pollinator friendly native herbs and flowers such as clover, yarrow and birds foot trefoil. Full details of this will be prepared for the spring.

The council is also looking to work with partners across Kent, including other councils and Kent Wildlife Trust, for ways to most effectively protect and support biodiversity in the coming months.