Police have been called to Ellington Park today (December 2) after protesters tried to prevent cherry trees being felled at the site.

The felling of trees in the park’s ‘Cherry Avenue’ is taking place while the project to build a new cafe, restored terrace, new playground and landscaping is underway.

But protesters, including members of Thanet Green Party, attempted to stop the trees being cut.

She says campaigners would like to see saplings planted and to be able to take hold and get established before mature trees are removed.

She added: “We need to try and adapt plans, people are upset about the trees being removed. We would like to suspend the felling and try and find a compromise. The problem is the historical aspect is taking priority over the environmental aspect and we need to find a way to merge the two.

“It has been agreed felling will stop so a meeting can be arranged with the ward councillors, Street Trees for Ramsgate and the Ramsgate Historical Society. The hope is another look can be taken at the trees left to be felled to save as many as possible.”

The Thanet Trees group posted about the felling yesterday, saying: “This week Thanet council has commenced the felling of an entire avenue of beautiful and much loved mature cherry trees in Ellington Park.” 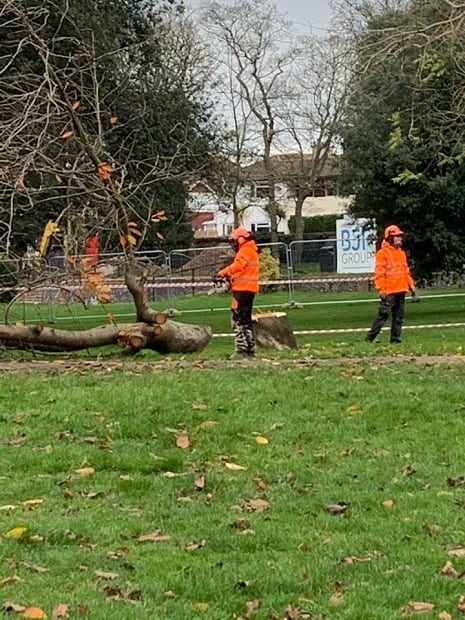 The group says there are “serious queries over how the consultation was conducted and how large mature trees were assessed for felling.”

The Friends of Ellington Park say 10 out of 392 trees identified in a 2018 survey at the park have been removed, adding that all were: “either dead, diseased or in danger of pushing the outer flint wall over.”

In a statement the Friends say: “The cherry ‘avenue’ was planted just after World War Two and the lifespan of a cherry tree can be as short as 16 – 20 years as they are a sensitive, specimen variety, easily susceptible to be invaded by insects and diseases.

“Indeed, many of the original avenue have already been removed. As far back as 2012, the then Tree Warden used to do tree walks and told us that the cherry trees were due to come down because of their age. 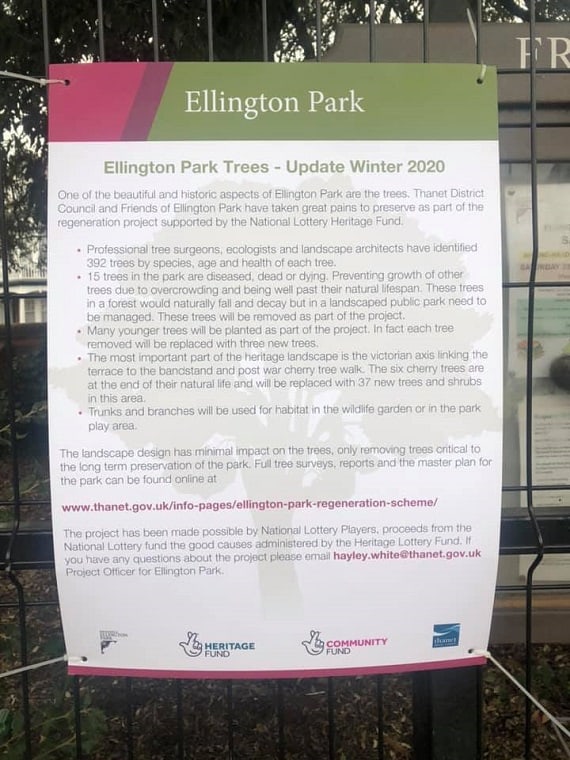 “Thus, it makes perfect sense now to replace trees at the end of their natural life and the whole original avenue be replaced with younger, healthy trees as part of this project.  None are being removed for aesthetic reasons.

“The Friends of Ellington Park have planted over 700 trees and shrubs in the wildlife area, including hawthorn, blackthorn, mirabel, rosa rugosa, and many more.  Planting not assisted by these protesters: how many trees have they planted?

“At the end of this project, the park will look wonderful and be full of healthy trees for the next generation.”

Cllr Steve Albon, Cabinet Member for Operational Services at Thanet council, said: “We’re disappointed to have seen disruption at Ellington Park during the scheduled removal of the trees in the cherry tree avenue area. These trees are being removed as part of a long-established project to restore and renovate Ellington Park.

“The trees have been appropriately surveyed by a specialist team and confirmed that they are at the end of their natural lifespan. New trees will be planted in their place and their tree trunks will also be used elsewhere in the park.

“Due to safety concerns and unauthorised people on the site, work has now been postponed. It was agreed that a meeting would be arranged with the group and ward councillors to share survey findings and talk about the planned removal of trees. No further tree work will be undertaken before the meeting.

“Throughout this process, and by working closely with the Friends of Ellington Park, we have engaged with the community and interested groups regularly. This consultation has resulted in positive changes and adaptations being made for the park as a whole. Ellington Park is on a fantastic regeneration journey, which will benefit our community and give the park a new lease of life.

“As well as the project at Ellington Park, the council is also working on a number of different strands of activity to improve and restore tree cover in Thanet. This includes a Tree and Biodiversity Strategy for Thanet which aims to increase tree cover and to create a functional and beautiful biodiversity network throughout the District, and ongoing support of the national Urban Tree Challenge initiative.”

A Kent Police spokesperson said: “Kent Police received a report of a protest in Ellington Park, Ramsgate at 10.38am on Wednesday 2 December. Officers attended and spoke to all parties involved. No offences were reported.”