A Kent version of a 2021 calendar highlighting invisible illnesses and diseases aims to raise money for charities while helping others to understand that not all conditions can be seen.

A national calendar has been produced by Jessica Logan who is on a mission to empower those with hidden illnesses.

Jessica lives with a chronic illness, and has  a Stoma bag due to having no colon.  Her illnesses almost cost her life earlier this year and her experience drove her to create www.makingtheinvisiblevisible.org.uk to help others understand invisible illnesses and disabilities.

Several Kent people are included in the national calendar but the idea for a Kent one sprung up and was organised by Broadstairs pageantry boss Charlotte Brooker with Garlinge photographer Philippa Jones taking the images.

Charlotte said: “CJB pageantry, which I run, organised the Kent side of the shoot for the invisible illness calendar.

“Originally we were just going to take a few images to be used as part of the main calendar with individuals from all across the country.

“The calendar aim is to raise awareness around invisible illnesses and it is an amazing platform created by pageant queen Jess Logan. Leading up to the shoot, a few people needed encouragement to attend but I ensured all I had the best photographer for the job.

“The Kent experience ended up being such a positive and uplifting day for the individuals involved. For some it was a milestone they had overcome. Photogenic Photography is just amazing at supporting the individuals and bringing the best out of them.

“So many of the images captured are truly stunning. Three are used in the main calendar but Photogenic Photography decided to make a Kent version to highlight some of the moments and images captured. She will be donating all profits to main charity, extending the reach of this amazing platform.

“ I was honoured to have organised the shoot and to have been part of such a brilliant thing and day. CJB pageantry was set up by myself to help my students from other areas see how the community could progress them as individuals. The pageantry community is not what most expect. Not all who took part in the shoot are members I am, however, equally proud of the progress of each individual involved.”

Philippa said all the people who took part in the Kent shoot left her “in awe.”

She said: “I do a lot for charity with my photography, so when I was asked to be involved in a charity calendar for such a good cause I jumped at the chance. I too have a hidden illness, which I prefer to keep to myself, so this was secretly very close to my heart.

“Sadly, I lost my studio during the first lockdown and 95% of my weddings moved into 2021, so it was great to pick up my cameras again!

“Due to our very strict covid security we spent quite a few hours at the venue with people coming every half hour for their section of the shoots.

“As well as the positive images, I also threw in a mini shoot of each of them. I was very proud at the end of it as they had all said they had felt empowered by the time they left.

“I was so inspired by them, and so in awe of their stories and bravery. They each wrote positive words on themselves to show themselves and the world that its ok not to be ok. It is ok to have a condition that isn’t glaringly obvious and is also ok to show it and own it!  I am delighted to say that they all left their shoots feeling empowered and proud, and so they should have done.

“The calendar has all of the pivotal dates of awareness days/weeks/months , to remind and acknowledge the relevant conditions.

“The shoot was so successful that we decided to do a Kent version of the calendar, still with the profits going to the same charity. Even after 15 years I still get a buzz seeing my work on people’s walls.” 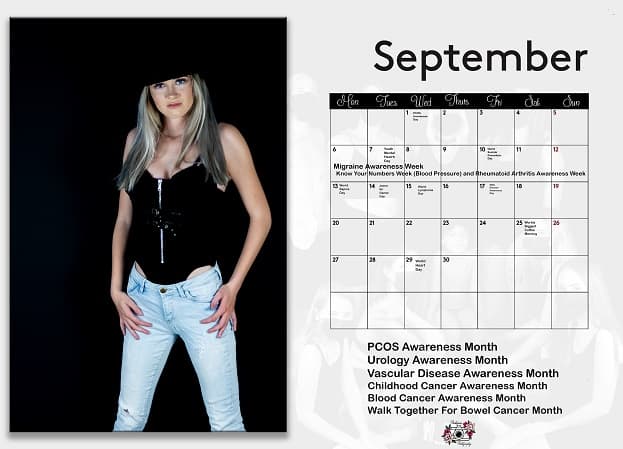 Sophie Johnson, 17, from Margate: “I got involved because I’m am very passionate about hidden conditions and illness, I have suffered with mental health issues for many years, I’m 17 years old and really want to make more people aware that hidden conditions are real and they can come in any shape size or form.” 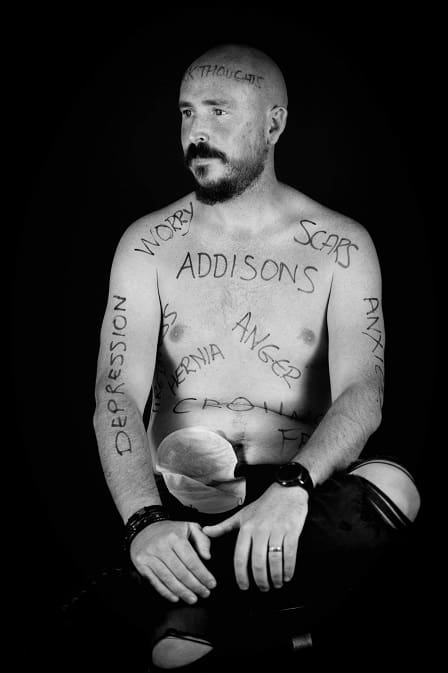 He said: “ I did the shoot to do something out of my comfort zone and to be the person I tell others to be, that’s be confident in yourself and your body – something I haven’t been true to myself.

“I love the work Jessica is doing for everyone living with a hidden disabilit, and the feature of writing positive words and our disabilities on our bodies is a fantastic show to the public.

“Many people may look very normal but deep within, they are fighting battles you may never know or see. #bekind #DontJudge

“Philippa the photographer made me feel very comfortable. I walked in with a confident exterior but was a shaking, anxious mess inside. But she helped me relax and had me posing like a pro in no-time. She is such a kind hearted lady with great banter.

“I had an overwhelming feeling of emotions doing the shoot. I never thought I would have done this before my ileostomy surgery, let alone with a stoma bag hanging of my belly.

“I’m so grateful to all involved for giving me a chance to brave my reality and give me pictures that I can share to support the invisible disability awareness.”

She said: “Living with invisible illnesses can be very debilitating, scary, embarrassing and lonely. More often than not we are judged without true understanding, often made out to be lazy, weak and even faking it. Please be kind and stop the judgment, you don’t know what people may be going through.

“Everyday is a fight, a fight to get up and ready in the morning, a fight to say awake in the afternoon, a fight to find sleep at night. We are fighting pain every day, the pain may not stop but you must remember that the pain must not stop you.

“Jessica asked us to write positive words over our body to show that yes we do have invisible illnesses but we are strong, worthy, honest fighters and our illnesses do not define us as people.

“I was extremely nervous and it took a lot of courage to do this shoot, my body has seen many changes through the years due to medications/pregnancy which has had a negative effect on me, knocking my confidence.

“Not only that, many people do not know the real struggles. I plaster a fake smile to protect myself against any negativity. I wanted to join in Jessica’s campaign to help others and myself feel empowered. I can honestly say I felt amazing after and my negative mindset was quickly removed.

“Not all illnesses are visible! Know your worth and most of all be kind.”

Joanne Moran, 52, – Diagnosed at 10 years old with Ulcerative Colitis and had her bowel removed at the age of 20.

“I was invited to get involved with the invisible illnesses calendar as I have Bronchiectasis, no bowel and Fibromyalgia. My daughter Jessica, who is 17, was also invited to be involved as she is my young carer and has been for many years.

“The photo shoot was very empowering with lots of inspirational people. We all want to raise awareness around invisible illness and young carers. My Jess is my rock,”

Nadia Rigden, Whitstable, was involved with her daughters Milly and Lydia.

She said: “Philippa is an amazing photographer who had everyone at ease , Charlotte (CJB Events) and her worked so hard to get the Kent side of project to happen.” 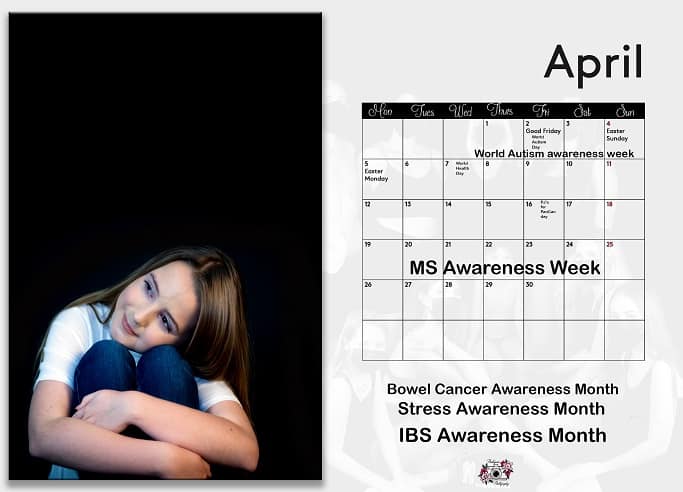 Milly, 10, said: “This experience has made me not be scared to show my true self, it’s made me think I’m not the only one who has hidden illness inside me, I think this was an amazing opportunity.” 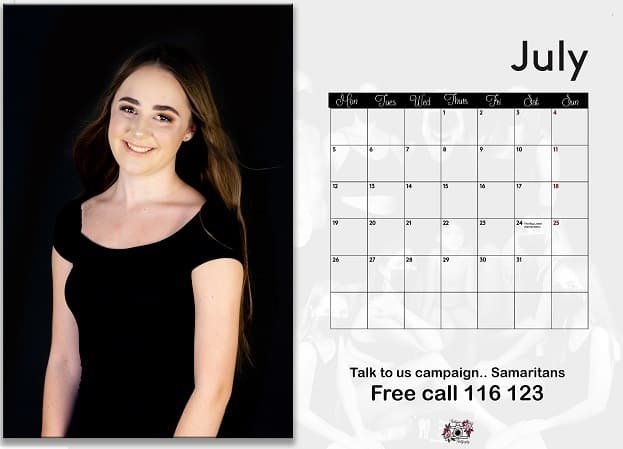 Lydia, 15, said: “I was very lucky to be involved in the whole project. It helped me with my confidence and meeting new people. I loved every minute of it.”

Find out more and buy the calendar

The A4 size calendars cost £10 and can be bought by messaging Philippa at www.facebook.com/photogenicphotography2010.