Two months ago, Dawn had celebrated her 90th birthday with many of her closest friends gathering outside her flat on that day and Dawn waving to them all from her balcony.  Covid-19 had meant that Dawn was ‘vulnerable’ and had needed, from last March, to self-isolate – even on her 90th birthday!

However, Dawn received many cards from her friends wishing her well which she much enjoyed and was even able to take a number of phone calls from close friends when in St Michael’s, until only a few days before she passed away.

Dawn loved writing and during the summer months, whilst self-isolating, she wrote her autobiography and sent copies of it to some of her friends.  In her autobiography, she wrote of her early childhood years at Chilham and of her experiences in the Second World War.

Most importantly, she wrote in much detail of her brother, Ken, who was twelve years older than her and was her only sibling.  Ken had joined the RAF in October 1938 and qualified as a Wireless-Operator.  Later, he became an Air-Gunner and was a member of the crew of a Wellington bomber based at Binbrook, Lincolnshire.

On March 9, 1942, his plane was shot down killing Ken and four other members of his crew.  That single incident remained with Dawn to the end of her life.  Dawn had been utterly devoted to Ken and his death had a profound effect on her.

Ken’s plane came down over the Netherlands whilst returning from a bombing raid on Essen.  He and his fellow crew members are buried in the military cemetery at Uden.  Dawn first visited Ken’s grave in 1982 and made many return visits over the following years.  On one of her visits, the Uden museum staff took Dawn to the exact location where the Wellington crashed.  She never forgot their kindness in taking her to this sacred spot.  As a gesture of thanks, Dawn donated Ken’s medals and papers to Uden Museum where they remain on display.

Dawn never married and lived at home with her mother most of her life moving from Minster to her beloved flat in Westgate half a century ago. 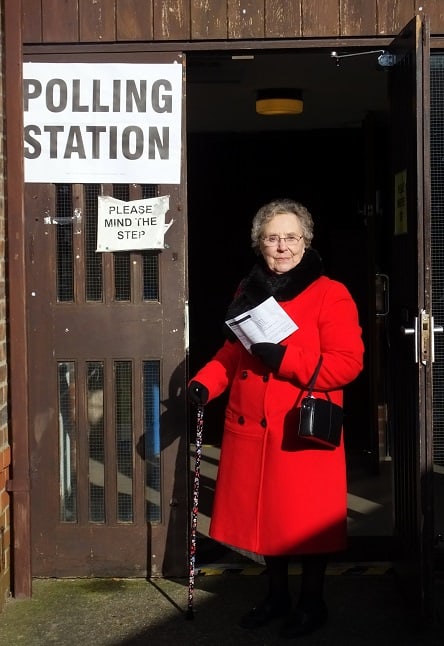 On her retirement, Dawn undertook a post-graduate course at the University of Kent writing a thesis on Westgate-on-Sea 1865-1940 and, in 1999, was awarded a Doctor of Philosophy degree of which she was most proud.

I first encountered Dawn over 20 years ago when I was living at Guildford and was researching the war memorials throughout the Borough of Margate.   Dawn had researched all the war memorials in Westgate and had listed all of them on the National Inventory of War Memorials.  It was not long before I made a trip to Westgate to meet this wonderful lady.  We found that we had much in common and so began a lasting friendship.  Of course, Dawn told me of the sad loss of her brother in 1942 which was the key to my understanding her incredible motivation and drive which she retained up to only a few weeks ago.  Anyone reading her autobiography will appreciate exactly what it was that drove Dawn to remember the fallen with such feeling.

It is not practical, in the space allowed, to list all that Dawn has done for her beloved Westgate and all of it done voluntarily, but it would be remiss not to mention her 14 years as Churchwarden of St Saviour’s Church and her 12 years as Foundation Governor of St Saviour’s School.

It was for all that Dawn had done for the town over so many years that the newly-formed Westgate-on-Sea Town Council in June 2016 conferred Honorary Freemanship on Dawn. She thoroughly deserved this honour and was very proud of being the very first Honorary Freeman of Westgate.  To this day, Dawn remains the only person to have been made an Honorary Freeman of the town.

Dawn led the Heritage Centre to erect a plaque at Lymington Road Recreation Ground War Memorial and the installation of a number of WWI and WWII commemorative benches throughout the town.

Dawn is probably best known in the town for being the Founder of the Westgate-on-Sea Heritage Centre.  She gave many brilliant talks on different aspect of the history of the town at meetings of the Heritage Centre over many years.  She also wrote dozens of booklets on Westgate’s heritage which will ensure that Dawn’s extensive knowledge of the town will not be lost in its entirety.  Dawn shone a light on the town’s history which will ensure that residents of the town will appreciate why Westgate, indeed, is such a special place.

Dawn was a very special lady and will be sadly missed by all her friends and acquaintances.  She had an exceedingly good ‘innings’ and made a lasting contribution to Westgate’s history and heritage but she will be greatly missed by all who knew her.