What are the chances of going online, typing the name of your great great uncle into Google and being taken straight to a photo of him for sale on eBay that week? That is exactly what happened to Hertfordshire resident Bryan Hewitt…

Bryan said: “In 1985 my brother and I visited Canterbury Cathedral Archives to research family history – our grandfather Stephen Gilham Hewitt was born in St Peter;s in 1879 and fought with The East Kent Buffs in The Boer War 1899-1902. Our ancestors lived in that area at least verifiably since 1641, though the Hewett’s, which was the original spelling, go back much further in Thanet.

“We discovered a great, great uncle with the impossibly grandiose name of  Joseph Napoleon Hewitt, born in 1837. He has intrigued me for 35 years and I have often wondered why they chose that name. Were they Francophiles? After all they were “country people” and an admiration for things  French at a time when France , far from being Britain’s ally , was viewed with suspicion.

1869 publican of The Crown and Thistle, High Street, Peter’s

1879 Photo shows him aged 41 in the uniform of a Cinque Ports Volunteer.

1911 Elizabeth is no longer with him

1919 Joseph dies in The Thanet Union Workhouse, aged 82. His last address had been 25 Milton Road, Margate. 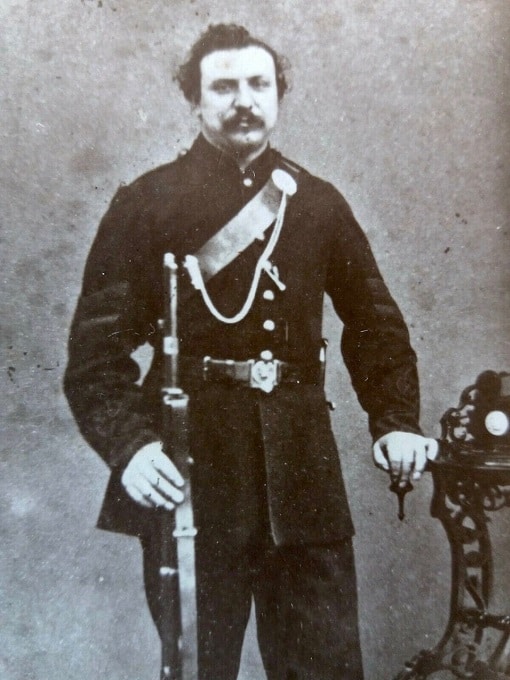 The photo, popularly known as a Carte- de -Visite, is a mid Victorian image showing a middle aged man of average height and trim, with thick  dark hair, an emphatic moustache and a dimpled chin.

He holds a rifle and is wearing the uniform of The Cinque Ports Volunteers. On the table by his left hand is his plumed shako. He is 41 years old.

The photo, unusually for the time, has an inscription in fountain pen reading: “Joseph Napoleon Hewitt, Father of my mother dear Emmie Ingamells,  Cinque Ports Volunteers 1879.” 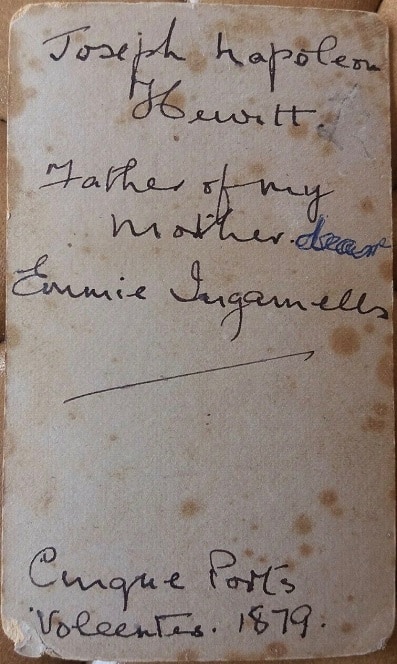 Bryan said: “It’s just so amazing to be able to look at my great, great uncle in the flesh, born at a time when the professional classes , doctors for instance, still clung to the dying fashion of wearing powdered wigs -a legacy of the 18th Century.

“Usually it’s a privilege  of the aristocracy  to have images of ancestors that far back. According the friendly eBayer ,who is a dealer at The Petticoat Lane Emporium Ramsgate, he bought it from a former curator of Margate Museum.

“Now, at 141 years old , it’s the oldest heirloom in the family. We are related to several old Thanet families, among them The Van Hear’s, Danton’s, Castle’s, Hertitage’s, Bax’s, Fasham’s , Gilham’s, Hewett’s, Norwood’s and the  Langford’s,  of which we still maintain strong, loving  links.”

Bryan also found out that Joseph’s eldest son was Joseph Napoleon Hewitt II, born in 1867. He died in Thanet in July 1951, aged 85.