Where do I begin? Half term has afforded The Boy and I some opportunities to try different things, and it’s been the simplest moments that have given the most pleasure.

A trip to London could have ended disastrously when Poseidon went missing. No, not the god of the sea as worshipped by the Greeks; don’t be silly. Poseidon was Bryan’s faithful companion; his wolf, who he adored beyond words. Bryan put him down somewhere and then, before we knew it, we were retracing our steps – but to no avail. The Science Museum did everything they could to help us, but sadly – his final destination will forever remain a mystery.

I had two options; gloss over it and move on, or accept that Bryan was very genuinely upset at the loss and deal with it. He’s nine; he needs to learn how to deal with his feelings, and know that I respect them too. So we dealt with it, talked it through, and I realised that he wasn’t going to get on very well without a new companion that somehow channelled his old companion. So I opted for the Dr Who approach; we located a new companion – a rather beautiful dog – and performed a special ceremony where Poseidon regenerated from his old body into the new one. We had a proper ceremony and everything. I’m a writer; you can tell, can’t you? In any case, Poseidon (in his new body) is reintegrating himself into our family, and I have a contented son again, so it can’t all be bad.

After our London sojourn, we had a trip to Dover Castle with one of Bryan’s friends; the heavens opened at a few points during the day, and those points weren’t fun. Being responsible for two children – a 100% increase on my usual total – was fine; I was worried I wouldn’t be able to give either one my focus, but I figured out a way to make it work pretty early on. They had earned their trip to Kaspa’s at the end of the day, if only to dry them off in comfort and watch as the sugar flowed freely.

Quex Park also deserves a very honourable mention; Bryan and I went over to the Spooky Trail this week, and we spent a brilliant morning being guided around a Halloween-themed trail with live actors, sweets, and the option of picking a pumpkin at the end. I had no idea what to expect, but it was a lot of fun; Bryan was totally engrossed, and that’s the point. We ended that day with endless puddles being splashed (well, Bryan did) and a chance to spend time with his nan and granddad.

And then Halloween itself; it’s not the same this year, of course it isn’t. We could have probably predicted that some time ago, and it’s tough for kids to understand why things are different sometimes – at least on an emotional level. But we watched Ghostbusters (with the all-female cast); I’d seen it before in the cinema and, if anything, it was funnier this time around. I love introducing different films to Bryan – even when I explained that this film had come out in 2016, and he said confidently, “Oh, you were still losing your hair then, weren’t you, Daddy?” Yes, thank you. 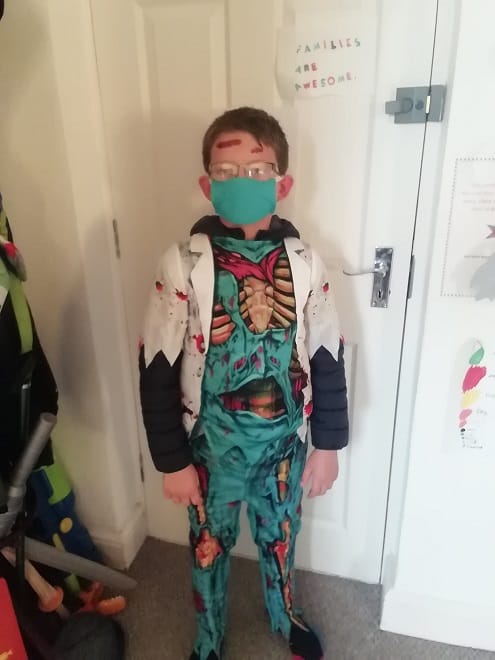 We celebrated Trick or Treat by doing two Halloween hunts (one with his nan and granddad and one in our block of flats), and also doing a form of Trick of Treating where the tracker gets a sweet from their parent every time they spot a pumpkin in a window. A few houses allowed knocks on the door, but they were few and far between; it was sad to see, but I knew it was going to be different to normal – and, in the end, Bryan’s sweet bucket was overflowing. We joined forces with our neighbour for part of the journey, and her son and mine used their collective charms to get a nice collection of sugar.

It’s been a good week. The impending lockdown hasn’t done much to dampen our spirits; he will miss his swimming and in-person dance class, but he still gets to learn and I get to work – and we still have each other. I’m called daddy, and that’s the biggest privilege I will ever have.