Stories of ghosts are as much a part of Halloween as pumpkin lanterns and trick or treat. Thanet has a number of spooky pubs, homes and roadways. According to folklore Halloween night is when ghosts try to return to earthly homes and malicious spirits create mischief.

We begin at Cleve Court, a Georgian manor house just outside Minster. From the 1921 until his death in 1935, it was the home of Sir Edward Carson. Best remembered for his involvement in the first trial of Oscar Wilde, Sir Edward was not given to believing in such things as ghosts. But his wife, Ruby, was convinced the house was haunted.

During the day all was normal, but at night the household would hear disembodied footsteps and other strange noises. There were dragging noises, taps on doors in the dead of night and the sound of draws and cupboards opening and closing in empty rooms, all of which would unnerve visitors.

Edward, their five-year-old son, complained about a grey lady who would loiter outside his room. When seen by Lady Carson, she described a young woman, wearing grey skirt and cape with a white ribbon in her hair, that floated noiselessly about the house. According to legend, the Grey Lady is the ghost of a former mistress of the house who was unhappily married. The story goes that her husband would frequently lock her away, while he and his friends became drunk while cavorting with harlots. Eventually the unhappy wife fell into a deep depression and died.

There are two theories explaining how Screaming Alley in Ramsgate got its name. The first claims that a terrified horse bolted from Grange Road down the alley and over the cliff edge, taking with it the carriage it was harnessed too and those in it. Another states that a nun from the local Roman Catholic school was walled up alive after being caught having an affair with a monk from St Augustine Abbey. Her screams are said to echo upon the wind on stormy nights.

A young soldier staying in the town during WW2 was found in the alley in a state of shock. He later recalled how he saw a woman dressed in white emerge through the wall, her arms outstretched as if pleading for help. 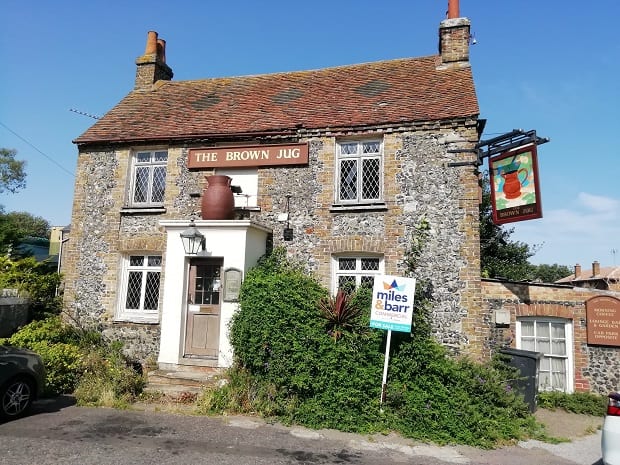 The Brown Jug at Dumpton Park (now sadly closed) started life as a cottage during the reign of Charles I. It became a pub during the 18th century and was a regular hangout for smugglers plying their clandestine trade. It’s said that the ghost of a woman dress in blue haunts this quaint former inn, though who she is and why her ghost walks is unknown.

A wraith-like figure is reputed stalk the rooms and corridors of Northdown House in Cliftonville. Caretakers have reported hearing whispering voices, loud disembodied footsteps, doors opening and closing by themselves and a general feeling of uneasiness.

During the 1980s a sceptical local journalist decided he would disprove the stories of the house’s spooky goings-on by spending the night there. The following morning he reported an uneasy feeling of being watched. At one point he heard footsteps coming from an adjacent room. When he investigated not only did he find it empty but the floor had been had removed by workmen carrying out renovations. He also heard a faint clicking sound, as if a woman was walking with stiletto heels but, again, he found nothing.

Sadly, attempts to establish the name of the journalist, the paper he worked for and his article relating to that night have, thus far, yielded nothing.

Out of all of the haunted locations in Thanet the best known is Margate’s Theatre Royal. Dating from 1787, it’s one of the oldest theatres in the country. Many of the nation’s old playhouses have ghosts, and the Theatre Royal is no exception.

A number of unexplained phenomena have been reported here, including inexplicable footsteps, the eerie sound of whispering and an orange-coloured orb that hovers over the stage. Among its ghosts include the theatre’s former manager, Sarah Thorne, who ran the place during the second half of the 19th century. Another is that of an actor who committed suicide by throwing himself from the theatre box into the orchestra pit during the early 1900s.

Other paranormal activity includes a scream that begins back-stage, moves through the theatre and out the stage door. A sinister presence is also said to lurk under the stage.

In January 1964, two chorus girls were conducting late-night rehearsals when a wraith-like figure appeared on stage. One girl fainted while the other, paralysed with fear, had to be assisted off the stage.

In 2002 the TV show Most Haunted was given permission to investigate the theatre’s supernatural phenomena. They managed to record some of these disturbances, including the glowing orb.

And there you have it, a little sample of what haunted Thanet has to offer, should you dare to experience the bone chilling terror for yourself. But remember, on Halloween night ghostly spirits run free. Nevertheless, sleep-tight, and don’t have nightmares!