A tale of more than 200 years of history at “The Royal Harbour of Ramsgate” has been published by Janet Munslow.

The new 68 page hardback book features a range of colour and black and white photographs and original commissioned artwork and tales of building techniques, the fishing industry, trade, leisure, assistance at sea, lifeboats, naval activities and of course the Little Ships role in the evacuation of troops in World War Two from the beaches and waters of Dunkirk.

The book is endorsed by local, award winning actor Brenda Blethyn and the money raised from sales will be shared between Ramsgate RNLI and the Ramsgate Sea Cadets.

The book was created due to Janet’s tenacity, extensive knowledge, connection and love of the harbour and with the close support and hard work of fellow residents of Ramsgate,  including good friend Barbara Sims, Ella Wood (graphic artist; designbyone-green) and Peter Garrard Askew (illustrator).

All those involved gave their time free of charge and the project was supported by Thanet Community Development Trust, Ramsgate Town Council grants and a grant from Kent County Council’s, Combined Members Fund. 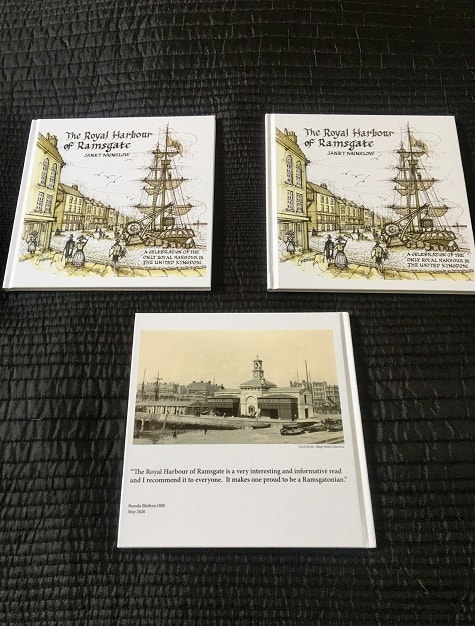 The book has been published as part of next year’s 200th anniversary of Ramsgate being awarded Royal Harbour status.

The Ramsgate 2021 anniversary festival is being organised by Thanet Community Development Trust, which includes local photographer and historian Ralph Hoult.

The festival is to include the installation of a 14ft high statue of George IV, who gave the harbour its royal status. Ramsgate artist and sculptor Dominic Grant initiated the creation of the larger than life statue in 2018.

He has donated his time and labour for the creation of the statue for the town.

It will be permanently sited overlooking the harbour, so it can be enjoyed for generations to come.

The statue is hoped to be officially unveiled during a three day festival from September 24-26 next year – dependent on the Covid situation.

Dominic, who works from his studio at the Military Arches, said: “I have always been amazed by the lack of sculptures or statues we have around our town and felt we should celebrate the Harbour’s 200th Anniversary in a very big way.”

The Royal Harbour of Ramsgate book costs £14.99 hardback, there is also paperback version.

The book can be bought at:

Stories of the Past, Queen Street, Ramsgate