A giant sand art bumblebee, surrounded by small sandy bees and flowers was created on Botany Bay this month as part of the Making a Buzz for the Coast project.

The scheme, led by the Bumblebee Conservation Trust (BBCT), covers the northern Kent coast area and has marked the importance of the Thanet coast for its bumblebee species.

The project team and its band of registered volunteers, following government covid-guidance, worked with  sand art specialists Sand in your Eye to carve a beautiful image of a shrill carder bee – one of UK’s rarest bees which is still found along the north Kent coast. 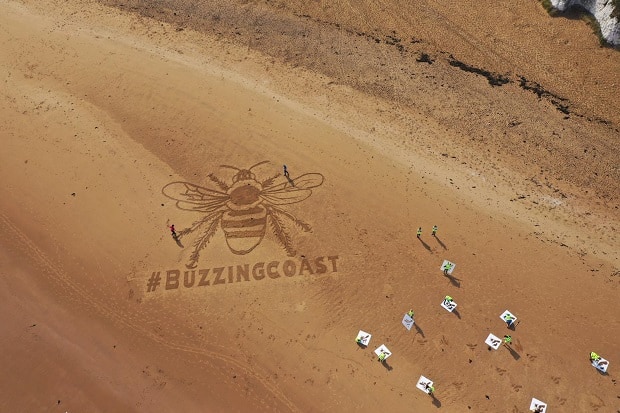 Making a Buzz, as it is affectionately called, is supported by core funding from National Lottery Heritage Fund and other conservation trusts funds and foundations. Now into its third and final year, the project has been working closely with Thanet District Council, as well as more than 100 registered volunteers, providing advice and support to manage and conserve some of its important sites for bumblebees and other pollinators.

Thanet council is one of eight partners working with Making a Buzz, including Kent Wildlife Trust, Kent County Council, Swale Borough Council, RSPB, Natural England and Thames Water plc. They are working together to conserve habitats and promote understanding about the nationally important and precious bumblebee populations of Kent. 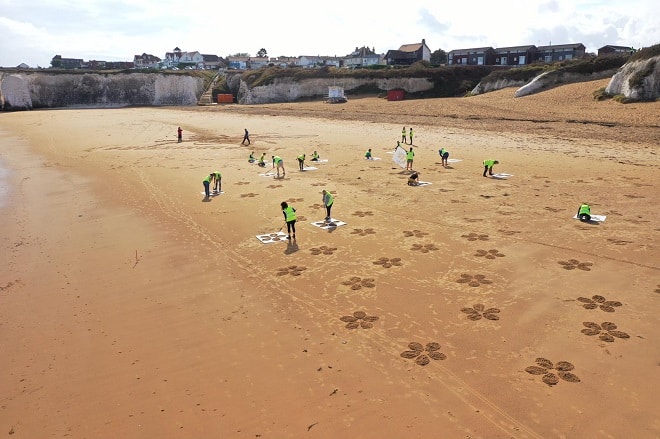 Thanet council received £8000 from the Making a Buzz for the Coast project towards  grass cutting and collection for biodiversity conservation purposes in 2018 and 2019. No claims or payments have been made for 2020.

The Trust provides Thanet council with  conservation advice for the management of Foreness Point, Westbrook Undercliff and the grassland around Sunken Garden.

Monitoring includes site visits ,a survey to record the species abundance and diversity of the grassland flora, data from a BeeWalk, and recordings of the presence of other wildlife species. 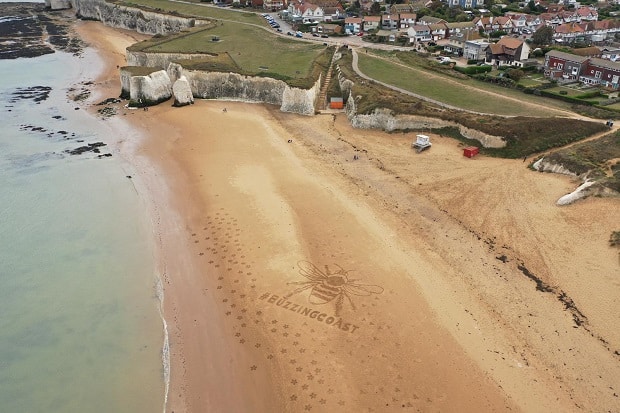 Kent is recognised to be one of the most important parts of the UK for the diversity of bumblebees, with 22 of the UK’s 24 species recorded in Kent, including five species that are rare or vulnerable nationally.

The Making a Buzz project is helping to strengthen and improve the status of these vital pollinating insects, many of which are declining in numbers.

Members of the public from all backgrounds and of all ages have been trained and supported to become bumblebee volunteers to identify different bumblebee species and carry out surveys including adding to a national citizen science scheme called BeeWalk – collecting bumblebee information nationally by BBCT.  So far the project has also engaged over 10,000 members of the public to understand and appreciate the vital importance of bumblebees through many different activities, workshops and events, including taking action in their own gardens and allotments. 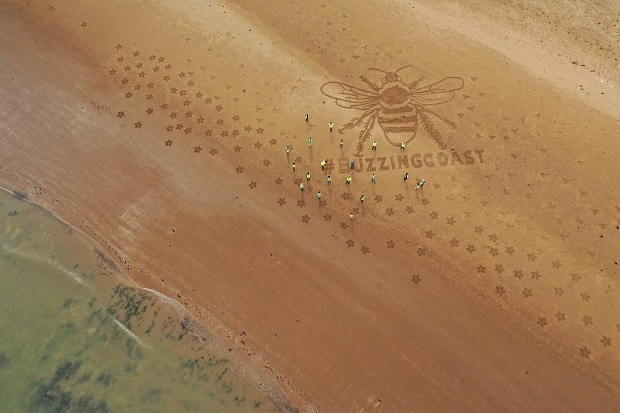 Emma Lansdell Project Manager for Making a Buzz for the Coast said:  “The Making a Buzz team and our wonderful band of volunteers are delighted to have created such a beautiful tribute to one of the UK’s rarest bumblebee – the shrill carder.

“The north Kent coast is noted for its importance for bumblebee species, and what better way to mark this than a beautiful image in the sand.

“Our volunteers and partners have worked hard over the last 3 years to manage sites and conserve bumblebees, and to spread the word about these vital pollinating insects.”

Find out more at www.bumblebeeconservation.org